Written by By Steve Myers

In the beginning… there was pre-production.

Scoring music to picture has changed radically over the past few decades. With the advent of digital platforms, it is no longer necessary to wait for picture lock to start the process. With the ease of digital editing, both in film and audio, there can be a very natural back and forth between director and composer as cues are edited. However, this may also lead to endless “tweaking” of a scene resulting in greater costs on the music side. Not to worry, there are a few things I like to get worked out at the very beginning of the process. Most importantly, I’ll make it clear that I’ll be using digital instruments until picture lock. At that point we can decide what kind of live players we’ll need for the final and what the budget can tolerate.

The process usually goes like this: Initial creative meeting between director and composer, back and forth as new edits are created, picture lock.

Before the initial creative meeting, I’ll usually ask for any reference of something the director has seen or heard that gives them some kind of inspiration. It doesn’t have to be something related to the current project, just anything that inspires and gives me a glimpse into their creative side.

Then, I’ll ask them what they are trying to accomplish with their film. For instance, “It’s a piece shot documentary style that should leave the audience uncomfortable at the end”. Or, “It’s a slice of life piece full of conflict and eventually tugs at the heart”. These descriptions are over-arching and subject to change, but they give me a place to start.

After the initial meeting, I’ll put together a palette of instrumental sounds, and write/record several short pieces to see how they work and feel. Then, I’ll have the director in for another short meeting and we’ll have a playback session. This gives us both an opportunity for feedback. Once we agree that we are in the ballpark, I’ll wait for the first edit to arrive. Since they will probably shoot the scenes out of sequence, I will be counting on the director to give me an idea where everything fits into the final edit.

Of course, this is only my working procedure, but it seems to be pretty effective at clearing up problems at the beginning of the process, and hopefully gives each of us some room to move on the budget. 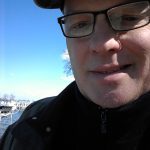