StudentFilmmakers Magazine talks with Natalie Hulla, a graduate of Ohio University with a B.A. in Creative Writing and a special focus in non-fiction. After graduation, Natalie worked for a political non-profit organization in Southwest Ohio and worked independently as a freelance copy writer and editor for various websites and online publications. Currently, she is filming her second documentary short film while working towards her M.F.A. in Film Production at Ohio University.

StudentFilmmakers Magazine: Do you have someone at Ohio University Film that you would consider a mentor?

Natalie Hulla: I’m currently working on a short documentary for my second year film and I’ve established a good connection with our editing professor Tom Hayes, who is also a documentary filmmaker. I value his insight in particular because his body of work gravitates towards social and cultural issues, and the topic of my documentary is as well. I feel that we both have a similar perspective on the impact documentaries can make. Recently, during a meeting with Tom I talked quite frankly about how heavy my doc feels at times with how much it weighs on my mind, even when I’m not filming or working directly with the material. The subject matter of my film can be rather disturbing. He assured me that if that’s how I feel at this point in production, I’m doing something right. It was very relieving to hear, particularly because the majority of the students in the program this year are doing narratives. Documentary is different kind of process altogether, and I think it takes a certain type of person and a certain type of filmmaker to understand that burden.

SFM: How do your experiences, connections and relationships that you’ve developed and that you’re continuing to develop at your school help you in your career?

Natalie Hulla: We have so many different personalities in our program and I’ve had to opportunity to work with many of them in the past year and half. We all have our strengths and weaknesses in areas, and along the way I’ve come to find what type of personalities allow me to do my best work and what type of personalities benefit from my strengths. I certainly hope to stay in good contact with my peers, but if I don’t have that luxury, I know what to look for when making films in the future.

SFM: What other kinds of things are you discovering and enjoying at the college?

Natalie Hulla: Honestly, I quite enjoy making independent films in a non-industry town like Athens. Sure, we have some setbacks, but this community really embraces our work. I’ve produced a few short films here and have a few on deck next semester that I’ll be producing, and I feel like I’m getting spoiled sometimes — it’s so easy to stick to a budget because the cost of living here isn’t as high as other towns, there isn’t nearly as much red tape, and non-industry folks who aren’t as familiar with filmmaking are so curious and so supportive of our projects. I run into a lot less problems than I anticipate as a producer. People are very friendly here.

SFM: What would you say is an interesting or memorable “challenge and solution” that you’ve experienced so far during student film shoots at your school?

Natalie Hulla: Oh, goodness. One of our setbacks certainly includes the weather. I’m from the Midwest so I’m used to seeing the extremes of every season, but I was on two rather memorable film sets last year that were particularly challenging for me: the first one was an all-exterior location at the end of January during the infamous polar vortex, and the other was over a weekend when we experienced sunshine, rain, sleet and snow all in the same day. I’m not an outdoorsy person but you have no idea how scrappy and rugged you become when you’re in those weather conditions! They were obviously tough sets but as someone who gravitates towards producing, I couldn’t ask for better hands-on learning experiences. I feel prepared for pretty much any element now.

SFM: In relation to your current projects, what are some new and exciting projects you’re working on now?

Natalie Hulla: Right now I’m in the middle of crafting a short documentary about sexual violence on college campuses. I’ve had some incredibly opportunities to film events and interactions between people who are both activists and artists who are contributing important ideas to the current, national conversation we’re having about this topic. I feel very passionate about this issue and I’m learning far more about it than I had anticipated. But so far my favorite aspect of this is being able to have personal conversations with people about it, whether or not it’s on camera. The majority of people I talk to about my project tell me two things: number one — how important this issue is to talk about, and number two — how they personally feel about this issue. I’ve received very genuine responses to both, and it’s led to so many filming opportunities that I’ve revised my original thesis in order to accommodate them. Of course, I’ve had my share of challenging conversations with people who aren’t as knowledgeable, tolerant or open-minded, but those conversations are equally important in my eyes. I know how valuable my work is and how important it is, so I always have to remind myself of that when the burden feels too heavy.

SFM: If you could share something inspirational with filmmakers and storytellers around the globe, what would it be?

Natalie Hulla: Trust your gut. Always trust your gut. I’ve come to learn that you’re constantly up against critique and criticism in this line of work, and it’s easy to get swept up in it if you’re not listening to your own voice. Take in the guidance and suggestions from people who you can trust, but be careful not to lose your unique point of view.

Natalie Hulla: Don’t give up! When our professor Annie Howell introduced our MFA class at our short film screening this year, she said, “Filmmaking IS rocket science,” and those are some of the truest words I’ve heard in this program. Filmmaking can be brutal and challenging but don’t lose sight of the reasons why you’re telling the story you’re telling. 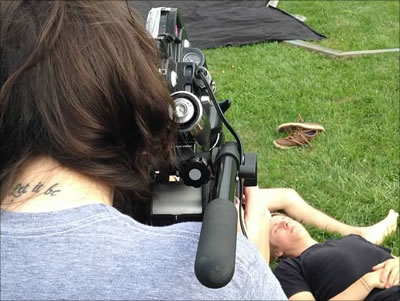