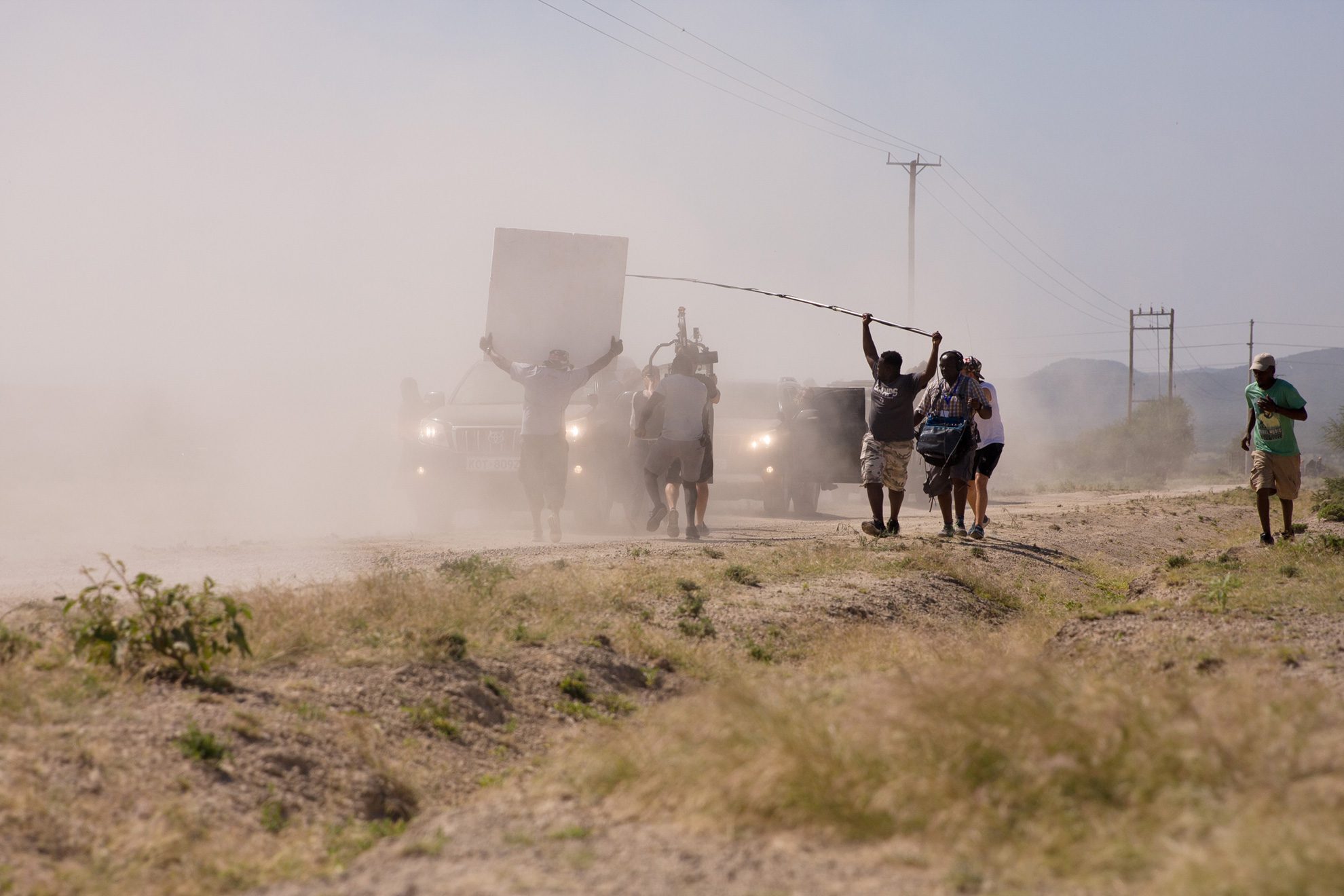 Kenyan-German short film, “Adisa”, directed by Simon Denda, stars Victoria Mayer, Jackline Wanjiku, Götz Otto, and Robert Agengo. Based on a true story – Susanne, chief diplomat and representative of the European Union, visits a remote village on the Somali border that was the victim of a terrorist attack. While the bereaved put all hope in her, the date and promises made for Susanne are purely a real political routine. But after a fatal accident caused by her presence, she is forced to leave her comfort zone and fight against the established patterns of behaviour in Europe.

After several years as a best boy and gaffer in the industry, Simon improved his directing skills at the University of Television and Film in Munich. Since then, he directed several short films and commercials. He is known for his craft in working with actors and his ability to combine creativity and technology to tell heartwarming and strong stories. With his graduation film, “Adisa”, he won the Student Academy Award in Silver.

Can you describe your process working with Laura Anweiler, your director-screenwriter collaboration, and how you turned an idea into a 30-minute screenplay that became an award-winning film?

Simon Denda: Working with Laura was very collaborative in any way. In the beginning, we talked a lot about the real incident and how we could adapt it into a story that tries to summon this many topics in a very personal story. Laura wrote a great first draft, but we knew that we needed to challenge ourselves to get more and more precise to reach that goal. So, we wrote a few more drafts where we looked into different directions to find our answers. But it did not stop there. Laura was also involved in the main casting process and in the editing room. In my opinion, it is of great value that there is a person who is so deep into the story as you and knows all the versions you had before. The next challenge was to translate the script into a movie. I think that there is not an award formula! You need to find partners that are not only supporting your vision but also challenge it. Only then the story and your own work has the possibility to grow. Shooting a film is a huge team effort, so if you have the possibility, you need to pick your closest team members wisely, but after that you need to let it flow so everyone can do their best work. Often this works out, and sometimes it does not. I think that this was also an important lesson to me. Sometimes things do not work out, and this is ok. With “Adisa”, everything worked, and I am really happy that it resonated with the audience.

What were some of the major challenges filming for 7 days in Kenya, and how did you overcome the challenges?

Simon Denda: Shooting in a different country with a different culture is always difficult. You never know if you get what you are used to from the different departments, actors, etc. In the end, we were quite lucky to find a very strong and passionate partner in Film Crew in Africa. Through them, we were able to work on a very professional level. Still, shooting such a film in 7 days was challenging. To keep your focus during these long days and try to get the best out of each scene was quite a task. What helped me the most was first, to think one step after the other. Of course, sometimes you need to think a bit ahead to avoid unsolvable situations. And second, to stay open to receive what the actors had to offer in each scene and not to stick to your narrow-minded version of the scene.

What are 3 Important Things you learned working with actors while filming “Adisa”?

Simon Denda: Less is more. I am not a native English speaker. When I am directing in German, I have the tendency to get very precise in what I want. I did know that I won’t have these precise words in English, so I decided to work mainly with action verbs and what if… constructions. That gave the actors and actresses space where they could be the characters. Actors are all different, especially when they come from different cultural backgrounds. As a director you need to develop a sense of what the actor in front of you needs to bring his best performances. Trust is a very big ingredient in this. So do not only talk about the characters but also about how you want to approach the directing, your workflow and your own insecurities. The third thing is: not everyone needs to like you sometimes. Acting means that you are lenting your body, your feelings and your mind to a character. That also means that there are boundaries and insecurities that need to be overcome to get good performances. You as the director need to address these things sometimes, which puts you in a pushy and “mean guy” position. So, you need to withstand this disharmony. That also means, that it is okay if the actors/characters relief their pressure on you, as long as you are in a healthy work relationship.

What was the most important thing you learned during post-production?

Simon Denda: In the end, there will always be a film. You can discuss quality but not the fact that after shooting there will be a film regardless of how bad your material is. This is somehow comforting. [smiles]

In your own words, what is the message of “Adisa”? What advice would you give to student filmmakers and visual storytellers?

Simon Denda: Most of the emerging filmmakers think of themselves, that they are the unicorns in this business. “The other people only need to understand how good I am” – mindset. I think this is a fatal mindset because it shifts your work focus on you and not the stories you are going to tell. In the end, people in the industry will watch your films because they want to know how you approach the world, a character, etc. That is a part of your USP in the end. So, use your time to develop who you are and what stories you care about. Success will come eventually along the way. To everyone who disagrees, aiming for success does not mean that you are going to be successful in the end. When you focus on your own development and you fail in the end, at least you will have grown as a person, and that, no one can take away from you.