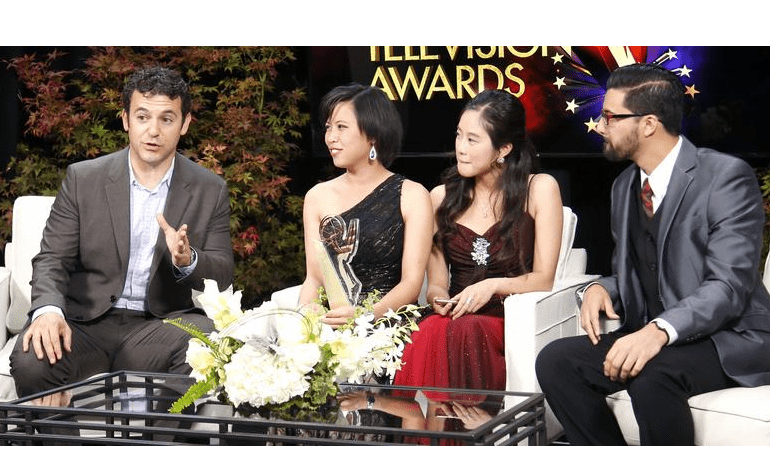 Florida State University Film School (film.fsu.edu) won its 40th Student Emmy (May 2016) when “Isa and the Frog Prince,” an MFA thesis film, won First Place in the Children’s Program. The film, about a young girl who believes her best friend, a frog, can change into an enchanted prince, was produced by Erica Chan directed and co-written by Yingxiang Huang, and co-written by Nic Sridej, all graduates of the 2015 MFA class.

Chan, who as producer was the official recipient of the award, was thrilled with her experience. “In the midst of the sweat and tears of making our film, never did I imagine we would be attending the College Television Awards, let alone taking 1st place! It was completely unexpected, overwhelming, and incredible. This opportunity also allowed me to attend the Nominee Summit that the Television Academy Foundation held, where I built new friendships with fellow nominees and networked with TV professionals. I’m thankful for all of the support from the faculty and staff from FSU that helped get us there and extremely grateful to Yingxiang Huang for allowing me to be a part of this journey.”

While producers are the filmmakers who are feted at the awards ceremony, Huang and Sridej both accepted the award with Chan. “I felt like it was a dream when we went on the stage to accept the award from Fred Savage. It’s just like what Isa says in the movie,” said Huang. “’It’s more than just a story.’ Winning a Student Emmy could be the start of my dream, but I am sure it is more than just a dream.”

Sridej adds, “In writing “Isa and the Frog Prince,” we wanted to explore the idea that magic exists in the world around us, although it never reveals itself in the ways you’d expect. Winning the Student Emmy was, in this way, magical; it was unexpected and surreal and astonishing.”

The film has been on the festival circuit throughout the past year, screening domestically and internationally, also garnering a Director’s Guild of America Student Film Award, and an acting nomination from the Utah Film Awards for its young actress.