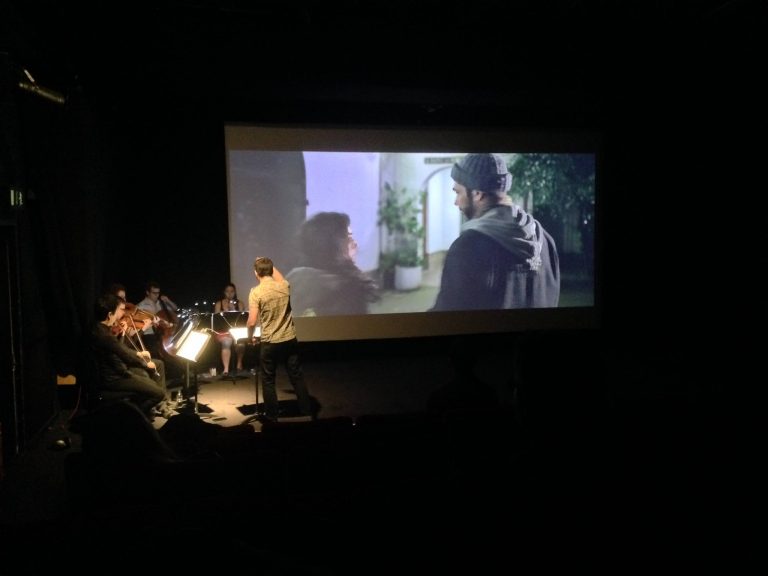 STUDENTFILMMAKERS: Tell us about your current projects.

Roman Falkenstein: I completed a short drama, “En Garde!” directed by local, talented director Daniel Yoffe. It’s a story of a young fencer on his way to manhood, wrestling with fears and a feeling of guilt, after the loss of  an important adult.

Film music is not my only passion. I compose chamber music as well, and there is a piano ensemble project I’m involved at the moment.

STUDENTFILMMAKERS: Can you share with us one of your projects, an achievement or event that you feel has impacted your work and career in a significant way?

Roman Falkenstein: I think, that was my trip to Film Fest Ghent to a World Soundtrack Awards 2015 ceremony where I met and communicated with many Hollywood film composers – Alan Silvestri, Patrick Doyle, Stephen Warbeck, Bruno Coulais and other great people. There was a Young Film Composers Competition, and luckily, I was among three finalists. We were nominated for the SABAM Award for Best Young Composer and invited to Ghent. Brussels Philharmonic performed the works of the finalists. I didn’t win but the experience and emotions were on the fantastic level!

STUDENTFILMMAKERS: Can you share with us your thoughts on film composing, music, or the film industry in Latvia?

Roman Falkenstein: Unfortunately, we don’t have big production companies and many independent filmmakers in Latvia. That’s why as a film composer, mostly I work with the directors from abroad. Thanks to modern technologies there is no need to travel further than my studio. We communicate with the directors and producers via skype, emails and so on.

And I found out that this is an amazing experience to explore different personalities and get to know wonderful people. I have a wide geography of connections – USA, UK, Russia, Israel, Scandinavian and Baltic states.

STUDENTFILMMAKERS: Can you share with us a film composing or music-related “Challenge and Solution”?

Roman Falkenstein: Every director wants to have a special soundtrack, the unique sound that fits to his film perfectly.

So, any time I start scoring a new film I have a challenge how to find a fresh palette. I try to use rare instruments like bass and alto flutes, bass clarinet, contra-bassoon, celesta. Not from the sample libraries but performed by live musicians – only then there is a sense.

I studied in the Department of Percussion Instruments in the Music Academy in Riga, so drums and percussion are close to me. In my recent projects, such as “My Mother is a Woman” by Anastasia Safronova or “Whining Low” by Sergio Zaciu, you can hear kalimbas, tank drums and even glass xylophone, which is made in Latvia by local craftsmen.

STUDENTFILMMAKERS: Can you describe your process for composing for  film/video/media?

Roman Falkenstein: You can say I am old-fashioned, but on the first stage, I compose with pen and paper. Usually, I try to hear in my head how it sounds, the current cue I am working on.

Of course, times when composer just plays a piano, sketches to director, seems a Stone Age today. I prepare audio mock-ups for the whole score, and when director and producer accept everything, we re-record all the instruments with live musicians at the studio.

I use sample libraries only for mock-ups. If you want to sound fresh and with a good feeling, drive and mood, you need to have real performers who know what they are playing, what is this film about, and invest their own soul into your music.

Luckily, I am working with a wonderful musicians and very talented sound engineer, Sergey Laletin, who knows how to make the recording sound perfect.

You can argue that it is more expensive. I agree, but every time we compare mock-ups with re-recorded music, we find that it was worth doing.

STUDENTFILMMAKERS: If you could share your Top 3 Tips related to film composing or working with film projects what would they be?

Roman Falkenstein: Oh, I’m not a famous Oscar composer to give such an advice. However, I can share my point of view about some stuff.

Another important thing is education. There is an aphorism I like: “He learned from his own mistakes but those where more successful who learned from books.” Knowledge of Classical music, theory, harmony orchestration and all these other tools are crucial if you want to grow up as a composer. Also, film music basics are important – I am very thankful to Jack Freeman, my instructor from Berkley-online for giving me this.

And finally, don’t score films that don’t bring anything good to the world. Of course, money is important, but art is always in the first place for me.