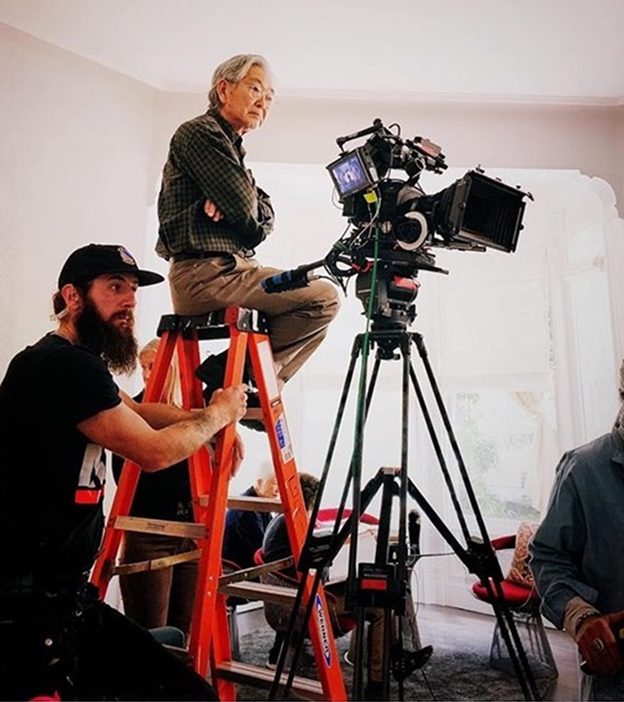 More often than not, filmmakers have their beginning in diverse disciplines – from writing, acting, music, architecture – the list is abundant. Having started in graphic design and illustration, storytelling with moving images ultimately became my aspiration. Through unlikely paths, some of us chose filmmaking as a fulfilling profession and our lives intersected and eventually converged.

Earlier in my career, I was fortunate to hook up with a mentor gaffer with years of theatre lighting. At first, I communicated to him in plain jargon – light, shadow, and color – and he would convert my mental pictures into 1K here, 2K soft light there, with some gel, etc., into physical lighting units to create those images. As I learned to see and interpret the subtle quality of luminance with different lights, I began to use “foot-candle” (the measurement of light intensity) as terms of dialogue. Along the way, the gaffer taught me to use all sorts of practical materials for effects – tracing paper, discarded sheer curtain, aluminum foil, etc. His toolbox was full of them, and he pulled them out like a magician would out of his hat. He showed me that in a given space, light we see and experience is through something or refraction of it on something around us.  His resourcefulness taught me that lighting is not simply mechanical, it is illumination and mirror of reality, and our imagination. Since then, I have welcomed input by the crew members’ collective knowledge. It enriched my cinematography and made it more practical, more personal. Similarly, I worked with a dolly grip who started as an ice skate dancer, whose sense of timing and rhythm were flawless like gliding on ice. I met a soundman who was a painter before entering filmmaking. I am sure fascinating and beguiling stories are waiting to be shared among us.

Cinema is a collaborative endeavor, and cinematography is one essential aspect of that effort. Pieced together into the mosaic of filmmaking are life experiences of those who play part in. From a distance, you see a picture, but upon close inspection, you see it is composed of small, distinct individual pieces. What drew some of us to filmmaking, a synthesis of art and technology, is that it is the best tool available now, to express our complex thoughts, feelings, and importantly, imaginations. Ultimately, to communicate with others. The two-dimensional moving pictures on a screen that can create so many dimensions in our psychic space is a mystery. The fact and the fiction crisscross and converge in our mind, giving us rich, unique perspective of the story. In a film, bits and pieces of images are strung together in specific sequences; they do not always follow a natural or logical progression. Yet we take them in, connect them and somehow make sense out of them, as if the images speak to us in code, but we decipher them into personal, meaningful experiences.

I’d like to mention two stylistically, very different films that gave me strong impressions and amplified my insight into cinematography; “The Legend of Suram Fortress” (1985) by Sergei Parajanov and “8 ½” (1963) by Federico Fellini.

Parajanov’s poetic, stylized film is captured within mostly static frames. Our vantage point is basically in the center of screen, and we can scan the images at our own pace. Punctuated sometimes with close-ups, we are drawn into specific details that give rise to dramatic emphasis. With changes in image size and shot length, the sequences build a visual, as well as visceral, rhythm. And in our mind’s eye, this manipulated time and space become a reality. It is our unique ability to connect dots and organize information into a seemingly coherent narrative.

In “8 ½”, by comparison, the camera is active; it moves along with actors or weaves through scenes. This active camera seems like another character in a scene or an inquisitive spectator. The old masters knew how to bring a story to an audience or bring an audience to a story. Fellini’s film was an eye opener for me in other ways. After viewing it many times, I realized there was something outside of logics and linear visual storytelling that felt very real. I use the word, “real,” subjectively. There were lighting changes in the middle of a scene or camera movements that produced unique sensations: they were more than eye-catching lighting or sweeping tracking shots. They were, I believe, amorphous, unconditional sensations that aroused and gave life to the feelings in me. Unlike dramatic stage lighting in opera or ballet, “8 ½” integrated the lighting and camera work as ethos of storytelling.

I have come to realize, while I am fond of beautiful images, I like images that are emotionally right, even if they are not pleasing or astute, images that speak to my heart, beyond the boundaries in the geography of mind. 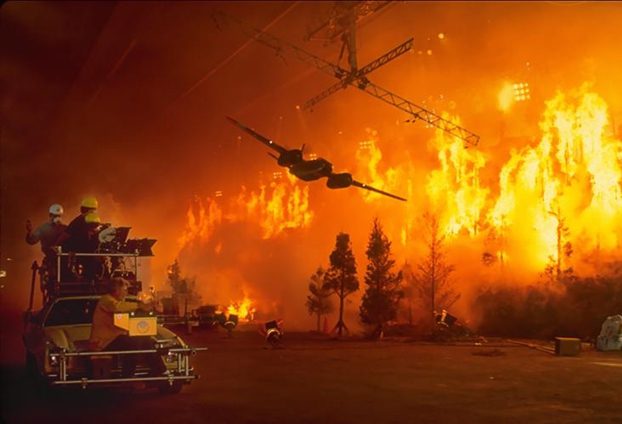 We cinematographers are called upon to solve technical challenges besides pictorial ones. Such project was “Always,” directed by Steven Spielberg, and it involved miniature photography which was not on my resume until then. Joe Johnston, the director with whom I collaborated on “Honey, I Shrunk the Kids” and “The Rocketeer,” helmed the miniature unit. My biggest objective was to achieve seamless match with the first unit shots in spite of differences in scale, and often limited availability of the first unit footage to compare. While testing exposure and color, I noticed that the fire, paradoxically, lacked realism by itself to my eyes, and to the film. It needed help. And the gaffer from ILM proposed hanging Maxi Brutes from the ceiling and laying dozens of par lights on the floor in random, all connected to flicker boxes. This helped create the blazing effect we needed and, when a model airplane flew through, the fire looked truly convincing. The visual effects supervisor also suggested we increase the shutter speed to 40 frames in relationship to the scale of the miniature. The input from their expertise culminated finally in the result I was after. Working on this unusual project gave me a new insight into the art of cinematography.

The cinematographer’s role is a collaborative one, to help realize the director’s vision, and enhance it, on screen. By the same token, we are supported by gaffers, grips, and other skilled individuals and their experiences, yielding more than the sum of its parts. What is reflected on the screen, seen and felt, is a result of the dots we bring to light and ultimately connect. 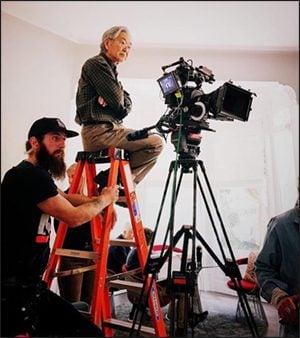 After graduating from San Francisco Art Institute in 1964, Hiro Narita, ASC became a director of photography for over thirty years in the film industry. Recipient of numerous awards, he is a member of the American Society of Cinematographers and Academy of Motion Pictures and Sciences. His work includes “Star Trek VI: The Discovered Country” (Warner Brothers), “Honey, I Shrunk the Kids” (Disney), and “Never Cry Wolf “ (Disney). He directed the documentary film, “Isamu Noguchi: Stones and Paper” (PBS American Masters).

Photo by: Paciano Triunfo, 2019, on the set of “Late Lunch,”directed by Eleanor Coppola.