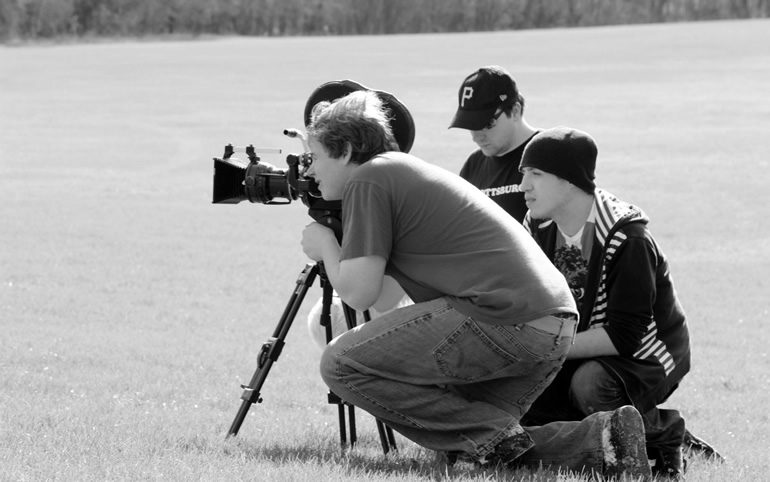 START IN FILMMAKING
I picked up a video camera when I was in 4th grade and started filming short movies throughout junior high mostly with my four younger brothers as the main actors in those movies. In high school, I got involved in an advanced broadcast journalism class which produced a weekly high school news show. I filmed and edited news stories, as well as sporting events, and eventually even produced the show each week. Now I am attending film school which has helped me learn more about filmmaking and gain more hands on experience with it.

FAVORITE CAMERAS :
My favorite camera that I have been able to use is an Arri Bl, which is a classic 16mm film camera that I had the privilege to use in my film school. It was a great experience to be able to shoot on actual film because it is so much different than digital.

Tip 1: Never go completely handheld, unless it is an absolutely essential movement for the story. Always use a tripod to try and steady the shot (a steadycam would work even better); have rarely shot completely handheld with the exception of a few shots in action sequences when it will add to the action of the scene. If at all possible though use something to keep the camera steady if the shot itself is supposed to be steady.

Tip 2. A track or dolly shot can be a very effective alternative to a static shot. Adding just a little bit of movement to your shot can really make a difference. If you can’t find a dolly track you could try and make one yourself using PVC pipe, skateboard wheels, and a wooden board. You can find detailed instructions to put it together easily on the internet and it can be relatively cheap. I’ve seen people make them for $20. Otherwise you can go with alternative methods of “track” like movement using household objects. In my experience with DIY filmmaking I have gone so far as to use rolling chairs, skateboards, and bikes to create dolly track like movements.

Tip 3. One of my favorite camera movement techniques which has been used in movies such as JAWS, Vertigo, and The Fellowship of the Ring, is the dolly zoom movement. Going with my number two tip, you will need some sort of dolly system to pull this off as best as possible. During the shooting of the shot, the camera tracks either in or out from the subject of the shot. Meanwhile the camera operator also zooms in or out, the opposite way the camera is tracking, at a speed which keeps the subject the same size in the frame throughout the whole shot. This movement when done at the proper speed of tracking and zooming will create the illusion that the background is getting bigger or smaller throughout the shot compared to the subject. It is a very unsettling and wonderful shot to experiment with and really quite a cool camera illusion as well when you pull it off.

UNIQUE EXPERIENCE WORKING ON THE SET:
I was the director of photography for my film group’s final project for Intermediate Filmmaking, a 16mm filmmaking class through my college. We had three days to shoot a short film on black and white 16mm negative film using an Arri Bl camera. Our shoot required filming in a forest located in a park outside of Moorhead, MN. It consisted of two night shoots in which we had to figure out how best to light the forest for my shots using only one small light kit, a generator, and a couple extension cords. This was the hardest challenge I’ve come across so far as a director of photography due to the fact that up to that point I had mostly worked with digital and the use of film brought about very different challenges that I had not even expected to encounter, such as not having enough light for the shot to even show up on film and not being able to see the footage until it was developed weeks later. Luckily the film looked great when we got it back developed. What made this shooting experience the most unique for me though was that during our first night shoot in the woods, our cast and crew were encountered by drug dealers in the parking lot of the park. A fight was going down which ended with a dealers car ending up in a river nearby. During this whole ordeal I was on set in the forest about two football fields a way striking lights because we had just wrapped. Suddenly, I get a phone call telling me a car has ended up in the river and there are drug dealers running around in woods. I am by myself and I have one light set up, lighting the forest, and I see the shadows of people running through the woods, and they are not my crew. It was very scary, but the cops showed up and the dealers were caught and arrested but not after a long and frightening amount of time in which our crew was trying to strike set and get equipment up to our car while a drug deal was going bad near us. It was definitely a unique experience.

CURRENT PROJECTS:
Currently I am taking a semester off from school to work on a business idea involving film that I have. I can’t give too much away about it but it has to do with documentary work which I find very interesting. I have a couple of films in festivals as well right now which I have been able to travel to attend since I am not taking classes. I have also been working on a couple of videos and films for contests including a music video and a stop motion animation. So even though I am not study film this semester I am still very busy working on films and continue with filmmaking.

Click here to create your FREE network profile and start networking online now. See you in the Network!