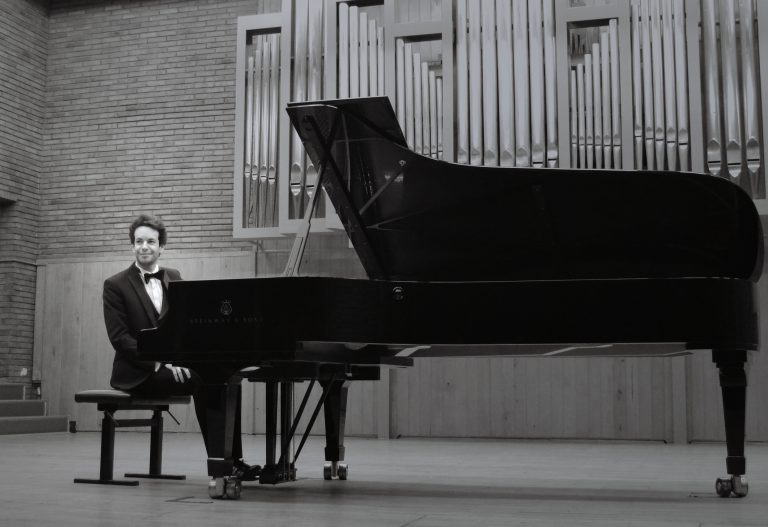 Christophe Alvarez is a concert pianist, doctor of music, composer and conductor. He is a tenure Teacher of Piano at the Academy of music Gheorghe Dima of Cluj. Christophe’s career led him to play in many concert halls and festivals in North America and in Europe. He is the author of three feature length films and many international short-movies soundtracks. His music has been selected to Festival des Canaries (2014), Seoul Movie Festival (2013) and Cannes Junior Festival (2013). His catalogue consists of several lieder for voice and piano, orchestral poems, and a piano solo music edited by Arpeggione.

StudentFilmmakers.com spotted Christophe Alvarez in its interactive Filmmakers Forums Community online and asked the musician and composer these 4 Questions.

Christophe Alvarez: I have always been passionate about music writing. At a very young age, I used to copy scores of great composers, then, during my first years of study at the conservatory, I had the chance to be initiated to the principles of composition in different styles and instrumental formations. I then perfected my orchestration technique under the guidance of a master and discovered all the colors that can be created by combining timbres. Some encounters allowed me to start in film music, by composing the soundtrack of my first short films, then quickly feature films which require a more complex thematic work and a wider instrumentation. Composing film music has nourished me a lot as a musician: it always takes a different form and requires a great adaptability.

Christophe Alvarez: I compose the old-fashioned way, on music paper, sitting at the piano, or at the desk when I don’t have an instrument available. What happens next depends on the director’s wishes and the budget allocated to the soundtrack. Most of the time, real players are hired for the recording, sometimes I use sound libraries that I program on MIDI keyboard: notably Vienna Symphonic Library for orchestra reconstitutions, Reason for beats or effects. I mix on Cubase. For the soundtracks of the feature films I have written, I have been able to collaborate with different instrumental formations, quartets, large orchestras. In this type of production, thanks to my solid musical training and experience, I realize the orchestration myself and I conduct the orchestra. The recording is then mixed and mastered in a specialized studio.

Christophe Alvarez: The relationship between music and image immediately fascinated me, I found a very current means of expression, which touches the spectator in a direct way, free from the notion of complexity inherent in many works created nowadays in modern music. The relationship with the director and the production team is often a challenge for the composer who must adapt and understand the director’s imagination in order to sublimate his images, while preserving his own idea, his own artistic sense. One must model his inspiration according to the rhythm of the scenario and the image, one must go to the essential in the thematic conception, purify one’s art to make it directly transmissible, without filter, transparent not to overload the expressive space already occupied by the image. Creating film music often requires leaving one’s comfort zone, experimenting with different styles: prior theoretical knowledge is essential to provide a qualitative product.

Christophe Alvarez: In my opinion, directors and composers are artists whose divergence often lies in the way they approach the feeling they wish to convey. The essence of it is often the same, only the means differ. That is why it is essential to establish a strong communication from the beginning of the collaboration, to share all ideas. Avoid any form of competition or unjustified fear about the prevalence of one art over the other (the most frequent concern being to see one’s music relegated to an almost inaudible background). The particularity of cinema is its facility to create a symbiosis between all the artistic forms of human expression: image, literature, music, movement. Within this melting pot, none of these forms can flourish at the expense of another. The director and the composer are the two main actors, equal, of an art with universal scope.

Maura to Nataraj 2 hours ago

Maura to Yaoyuan 10 hours ago

Yaoyuan became a registered member a day ago