Give Yourself an Exit Strategy in Post-Production

One thing that is frequently left out of the camera work discussion is how it affects you in post-production.

With filmmaking, having the ability to make decisions knowing how they will affect things down the road, will put you in a much better position when it comes to your finished product. This doesn’t mean you need to know exactly how the movie will be edited before you start shooting. It does mean, however, that you know different ways you could potentially put the film together when going into production.

Let’s take a look at a very simple camera technique that can save you big headaches when it comes to the edit.

The static shot – maybe static doesn’t fully cover it, but it hopefully gets your head in the right place. Sometimes, you just have to let your talent exit frame.

The urge with a lot of beginners is to follow the action. It is a valid approach in making sure you get enough coverage of your scene to edit it together.

The key that is frequently left off the table is in remembering that exits are also coverage. The exit is more than just someone exiting a frame or leaving a scene. It is an edit point that, if not captured, limits what can be done in the post-production edit.

To understand the importance of this, let’s hop on over to some editing rules that apply to what you captured on set.

The thing with rules in filmmaking is that it is not that they are right or wrong but that they produce different results. Knowing the results something might deliver helps you to be more intentional in your storytelling. By using the simple camera trick of letting your subjects exit frame, you are giving yourself options when you need it most.

Don’t fear the exit, embrace it and give yourself an “exit strategy” in post. 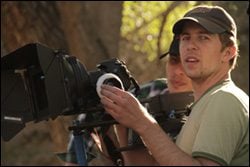