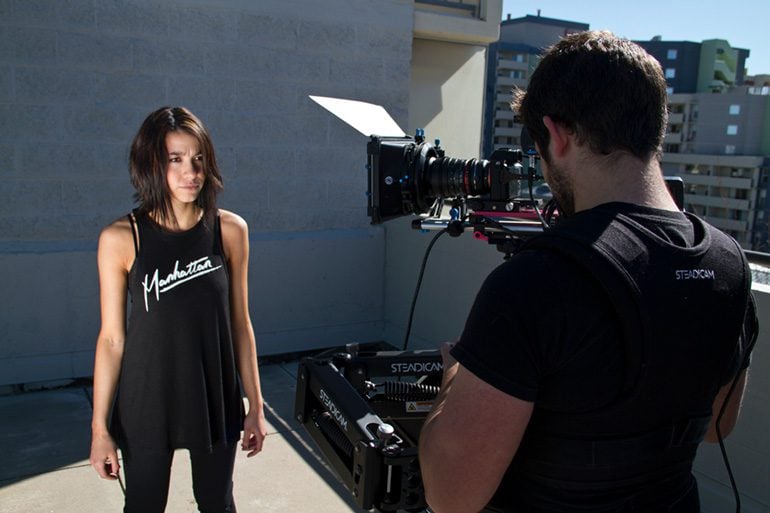 “Get out shooting, that’s the way you learn. I myself worked my way up through the ranks. I started as a ‘runner’ as it was called then, became a loader, 2nd AC and then 1st AC. I didn’t operate, by that time I had seen how the industry was changing. I needed to get out shooting my own stuff ASAP. I think that is the advice I would give now. Additionally, the important thing is to respect technicians that work for you. That way they will respect you.”
~Adam Biddle

“With actors, less information is always better. Don’t inundate them with tons of notes. Let ‘em do their thing. Let them surprise you. Let ’em act. The key is casting, find the right person in casting, and then you don’t have to be going on and on and pontificating about notes and things and this and that. Let them act, let them do their thing. If you don’t see it, then go over and make a few adjustments, but let ‘em do their thing. And say as little as possible, and don’t touch the actors. Actors don’t like being moved around like Disney characters… Actors are not puppets. It may feel like a strange note, but that’ll really get your first day off on a bad start with an actor. And the bigger the star, you’re gonna have a real tough time if you start to upset them. And don’t invite people on to the set and have a lot of visitors and strange people on the set because actors could get really wigged out with a lot of unfamiliar faces. You’ve got to create a safe environment for them and to feel comfortable to be at their best on camera. Not to say that you need to create a Gestapo mentality on the set. You want to create the feeling that it is this great place to be and great wonderful harmonic environment, but you don’t want a lot of chaos. Actors don’t like chaos on the set.”
~Michael Damian

“I would love to encourage any filmmaker to use digital effects as a tool to make better, more creative and touching movies and not only technological spectacles which are so common these days.”
~Tomas Salles

“It’s important to work with reliable people who you can count on to be there for you. And always be prepared to take over as the director when things aren’t coming together from other people or departments. As the director, I’ve found it’s really important to be more proactive as opposed to reactive, although in the end you end up being both.”
~Jason Outenreath

“Dream, dream, dream. Don’t allow anyone to say you can’t do something, just make it happen and keep dreaming. Work on your craft constantly. When discouragement comes around, just use your dreams as the high octane fuel it is and just re-energize yourself instead of falling to discouragement.”
~Chad Bell

“Get on shoots whenever and however you can.”
~Bing Rao

“I hate tripods. I remember when I was going to film school, all my stuff was very static, because you’re encouraged to go shot by shot instead of feeling it out. There’s no substitute for good camera work, but I encourage people to kind of just go and have fun and be free form.”
~Brian Lazzaro

“Lighting in my mind can make or break a film. When I take on my role as a producer there are two areas that I always make sure to budget for, art department and lighting. I feel both of these are often overlooked on indie and student projects. Both of these go hand in hand. The lighting sets the mood and tells the audience how they should feel before a character steps into frame. I respect those who handle lighting for film because it is truly an art. Finding a good gaffer and encouraging a good team between your gaffer, director and DP is important.”
~Brent Kunze

“Stay the course, and do not let people or things or situations make you do something that will make you question yourself later. If you are in it only for the money, then choose something else to do. But if you like to share stories, enlighten someone, encourage someone, then become a filmmaker.”
~Lepoleon Hall, Jr.