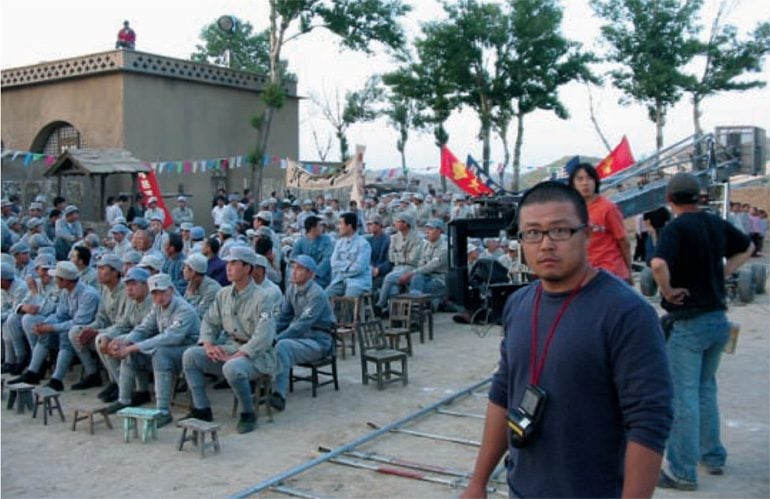 #FlashbackFriday #FBF  Do you remember our exclusive interview with Bing Rao?

New York-based Chinese cinematographer Bing Rao enjoys a unique firsthand vantage point in seeing how China’s film industry has transformed economically and technologically during the past 15 years, influenced by Hollywood while remaining true to its insular culture.

The  NYU film school graduate’s film career, which began  in Beijing 1989, includes  working  directly  with  Woody Allen, albeit as a translator, winning awards both back home in China and in the U.S. for his work as a director of photography, and lists a half-dozen cinematography credits  to his name from the prestigious China Film Group, the country’s leading studio.

Earning a BFA from China’s only film school, the state-run Beijing Film Academy, Rao moved to the U.S. in 1994 to further his filmmaking education. “I couldn’t get into NYU because my English was so bad,” he reminisces in an exclusive Student Filmmakers magazine interview. A year later his language skills improved enough for him to start the MFA program at New York University, where he graduated from in 2002 and also taught as an adjunct instructor. Since then, Rao has been in demand back in his homeland, where he won notices for his cinematography for a 2003 Chinese film called Suffocation.

His work on that film caught the eye of the Beijing Film Studio, which is part of China Film Group. The head of the studio is a graduate from  the  Producing  Department  of Beijing Film Academy, which commissioned Rao to shoot a feature-length, propaganda film called  Zhang  Si  De.  As  a way to counter corruption, the  Chinese  government  decided to produce a bio pic paying homage to a Chairman Mao bodyguard who died in the 1930s during a coal burning accident. He took wood chunks and burned them in a kiln to produce coal as the winter heating source.

“Not all [Chinese] filmmakers necessarily agree with [the Communist] Party,” he notes, but adds that the film was nevertheless well made, and he as well as the rest of the crew were well paid for their efforts. The government also recruited the country’s best screenwriter, Liu Heng, for what turned out to be “the biggest [film] project of 2004.”

The goal of the film was to guide citizens away from the temptations of taking advantage of corrupt situations that may arise with the country becoming more Westernized economically. “The Chinese system is sort of merging with the Western or American economic system,” Rao explains.

The film’s inspiration comes from the eulogy with the English translation “To Serve the People,” that Mao read at Si De’s funeral.

Before the economic reform, making a film in China with government participation is much easier than without, Rao notes. With the awareness and misleading information about the film business and filmmakers’ lifestyles, it is getting increasingly difficult to get locations for free, even with the help of local government. With the help of central government, it is a different story. Zhang Si De is a case as such. And because this production resulted from an official directive, many procedures were expedited, and the filming was smooth.

Overstating the obvious, anyone who intends on shooting a movie in China needs certain government permits, or it won’t be allowed. The permission process starts with submitting a script to a state-operated film board that could object to the content.

Rao’s love affair with American movies began when he  was a youth and among the invited guests (his father worked for the government’s radio station) for a special screening of The Sound of Music at an ornate Beijing theater. The mere scheduling of the film resulted in a riot, with a thousand locals storming the building, whose screen and antiquated projector weren’t equipped to exhibit properly the 35mm film in 2.20:1 aspect ratio. At the time, all Chinese films   were done in a 1.33:1 or 1.66:1 ratio. “It looked awful, but everyone loved it anyway,” Rao remembers.

Rao recalls that while he was in his fourth year of film school in Beijing—the year he was to graduate—an  interview with the department head was focused on his long ponytail rather than his work. “The advantage of this school is when you graduate, you’re assigned to a studio. I was so busy at the time that I didn’t cut my hair for a long time. I was a stupid, 26-year-old kid. I said, ‘No. If you want me to cut my hair, the next thing you will want is to cut my script.’ My dean suggested I cut my hair, otherwise I would have trouble with the film company. I didn’t cut my hair. I didn’t go back to the dean for another interview. The fact was the offer of the job was withdrawn by the film company since I refused to cut my hair, and I ended up coming to America trying to get into NYU under-prepared.”

Let go of trivial principles that may defeat your career goals.

Unlike some of his classmates at  the  Beijing  Film Academy who had their eye on Hollywood the whole time, Rao sort of stumbled into his American journey. “It has a lot to do with my ponytail story, without that incident, I would be working in China full-time.” Eventually he realized that he’d become more marketable back home if he gained some

U.S. education and experience. He met his future wife at the Beijing Film Academy, where she was an American student, and they married in China. Rao decided to come to New    York to study since the studio withdrew its job offer, and he was not happy with the fact that individuality is not appreciated. “New York  is where my wife was born and  lived, NYU is also located in New York. So, I am just lucky regarding choosing film school. It helped [his career] a lot going to NYU,” Rao admits in retrospect.

While at NYU, Rao realized that the best way to gain experience was to work on as many film projects. “Work for free, or just food, and work when it’s cold outside. I’ve done all that myself. A lot of students won’t do it. And be thorough, don’t run in the other direction just because something appears to be hard.”

Get on shoots whenever and however you can.

After earning his NYU degree, Rao realized that the knowledge he gained on the American way of managing the filmmaking process from a business perspective was far more valuable to producers back home than introducing Hollywood production values to a low-budget Chinese movie. The Chinese film and television industry are heavily influenced by Korean and Japanese styles, but Rao would prefer a direct Hollywood influence rather than having Japanese or Korean leftovers, since both of these two countries have a film industry heavily influenced by Hollywood. Prior to and during the Cold War, there might have been a Soviet influence aesthetically, but that has changed since the breakup of the Soviet Union and a politically chilly relationship between Russia and China.

But Chinese cineastes have always been influenced by Hollywood films going back to the 1920s and 1930s, especially lighting, set designs, costumes and makeup. In recent years, Chinese film in general is dealing with many more subjects than the typical innocuous kung-fu flick. For example, Rao cites the film he worked on, Suffocation, in which a husband contemplates killing his wife.

Rao met his future wife, May Lyle, at film school in China.  A classmate of May’s was working with line producer  Richard Brick for Woody Allen, who was a big fan of a 1991 film Da hong deng long gao gao gua (Raise the Red Lantern), which was shot by the non-English-speaking Chinese cinematographer Zhao Fei.

By now Rao was bilingual, plus being trained at NYU as a cinematographer made him uniquely qualified to translate for Allen and Fei. “I talked to [Brick], and we got along very well.”

Allen’s current project at the time was Sweet and Lowdown (1999), starring Sean Penn as a talented guitarist in the 1920s. But he quickly learned that neither Allen nor Penn were interested in chit-chat while they were working. Both were extremely private on the set, and Rao, picking up on the vibe, was all business.

Don’t pass up on networking opportunities.

While hi-def has been widely adopted in the U.S.,  especially for independent film production, in China it’s a much different story, according to Rao. “It’s all geared towards America because [the market for U.S. production] is huge. The HD system is far more complex and compatible in America. All the software, hardware, editing, post- production, special effects equipment will have to be compatible in order to create efficient workflow.  In China,  we don’t have this type of workflow, as least not for truly sophisticated projects. If you only use bits of the system, you end up with a monster that you can’t work with.”

Rao will soon be working on a feature film headed for China currently in its development stage. Going into pre- production this spring is the movie, Rick Hansen: Heart of a Dragon, whose producers include Mark Gordon, a producer of Saving Private Ryan, among his numerous other credits.

The film tells the story of the Vancouver paraplegic who, from 1985 to 1987, pushed his wheelchair through 34 countries on four continents to raise money for spinal-cord injury research. Rao will serve as a co-producer and as one of the cinematographers for his expertise shooting in China because Hansen completes his journey at the Great Wall.

“They were thinking about using a computer for the street scenes showing thousands of extras, but decided not to,” Rao says, noting that CGI effects may work on science   fiction but not on all types of films. However, due to budgetary considerations, the film is likely to be shot in hi- def, which Rao has worked with to some extent, although he’s had more experience with film stock. Rao’s HD camera of choice is the Sony F900, although he’s not interested in buying a camera of his own because the constant technological advancements made in that area.

“I’m not skeptical about the look [or quality] of HD. I  know it’s just great. It makes things simple. With digital, it’s easier to fix.”

Video or film, “… my approach as a cinematographer is  that you should do your best to help the director as much as he/she allows you.”

Remember what job you were hired to do.

There’s an old adage for anyone working in the movie business, What I really want to do is direct… Although he was trained as a cinematographer, Rao is no exception. “I’m working on a script that I plan to direct by the end of the year.”

He brings the conversation full circle: “A lot of people say if you want to work in this business move to LA. At this point, I like working in China.”

Bing Rao earned his BFA in Producing at Beijing Film Academy. He graduated with an MFA in Cinematography from Tisch School of the Arts, New York University, where he later taught as a Cinematography Instructor for the university’s Graduate Film Program. Rao received “Best Cinematography” at the 1998 Columbia University “Ralph Lauren New Works Film Festival,” for his black and white short film, Ellis Island.

Larry Jaffee is a New York-based freelance writer specializing in the entertainment and media business. His writing has been published by The New York Times, Rolling Stone, Hollywood Reporter, Billboard, among numerous other publications.