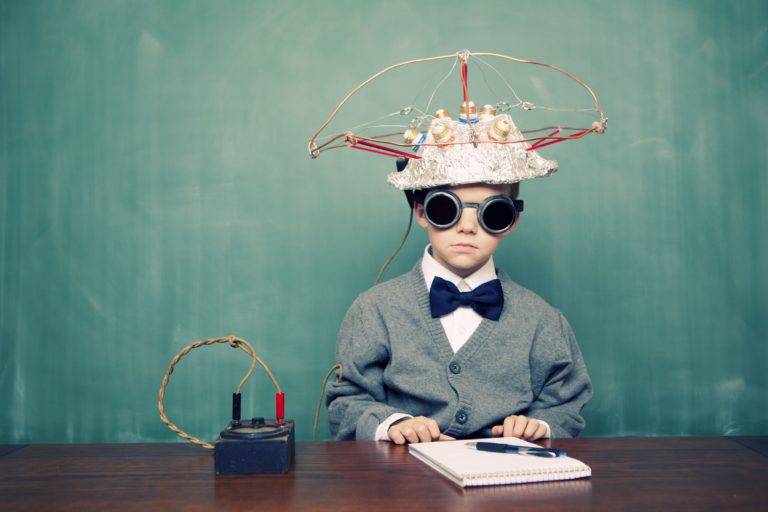 What’s The Frequency, Kenneth: An Overview Of Wireless Microphone Technology

There are many audio capture technologies at the disposal of today’s filmmakers, not least of which is the wireless microphone.

The advantages of using a wireless microphone to capture professional audio is obvious: it gives all members of the production the ability to move around freely without the encumbrance of wires. Plus, the wireless mic is always in close proximity to your speaking subject, giving you the best possible signal-to-background-noise ratio.

What’s not so obvious, though, is choosing the right wireless microphone for your production. There are so many systems on the market, operating in various frequency ranges, it can get very confusing as to which system is going to work best and why. The operating frequency set of a wireless microphone influences many other considerations, such as operating range, cost, ease-of-use, interference risk and licensing.

Trying to parse out all of this high-tech nomenclature is enough to drive one mad! But before the madness overcomes you and you feel the sudden urge to hunt down and beat up Dan Rather, keep on reading; In this article we’ll try to make some sense of the different wireless microphone technologies available in today’s U.S. market. 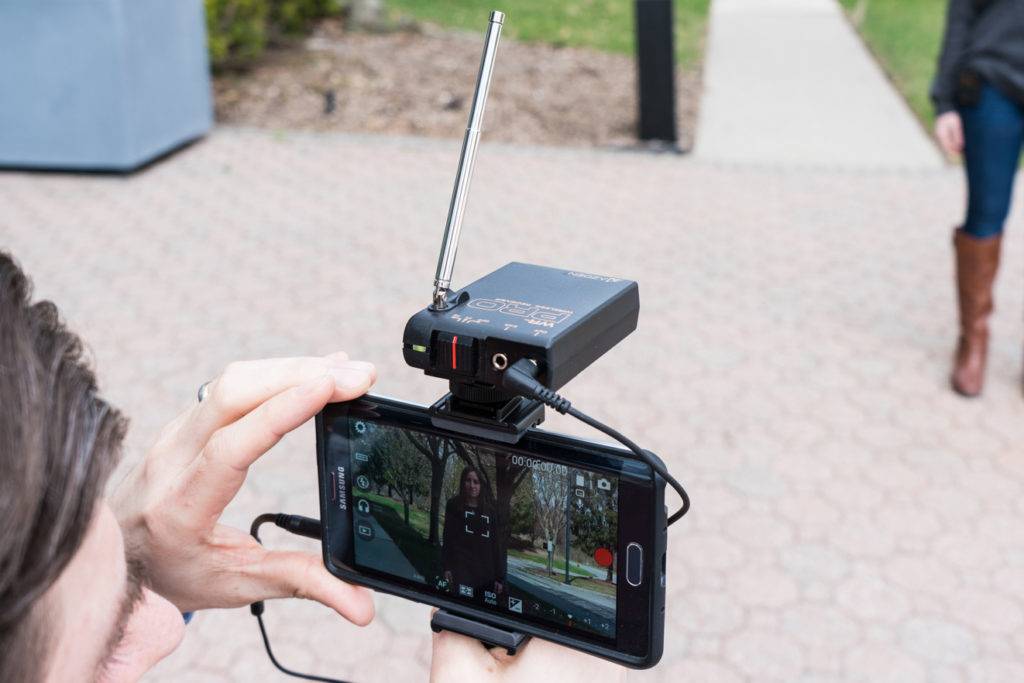 VHF stands for “very high frequency” and occupies the range of 25 – 300 MHz in the wireless spectrum. Although most of this frequency range is allocated for other usage, there are a few frequencies open for unlicensed wireless microphone system operation. This range falls between 169 – 172 MHz, also known as “traveling frequencies.” This means that within the U.S., you can use these frequencies in many cities across most of the country and run a very low risk of interference from other VHF transmissions.

Because of the length of VHF waveforms, the transmission signal can travel long distances without the need for direct line-of-sight between the transmitter and receiver. It is also possible for the audio to transmit around corners, through walls and other obstructions with a great deal of ease. These systems tend to be very user-friendly and cost effective. However, VHF has the drawback in that there are very few available frequencies and the longer wavelengths make the signal susceptible to noise from electrical devices.

Typically, most systems will only offer 2 to 4 operating frequencies, so using more than one system at a time, in close proximity, can cause problems for users. As a result, VHF is more suitable for beginners in need of user-friendly systems at an affordable price. With a lower cost, less moving parts and simpler operation, these systems in this frequency range still have their place in the market. 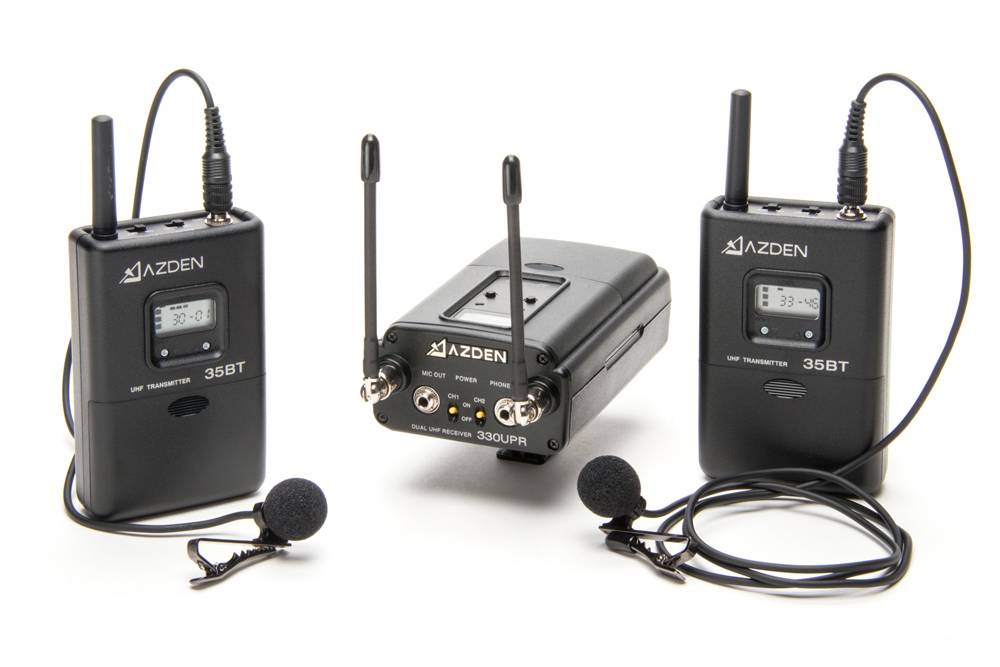 UHF, which stands for “ultra high frequency,” is the frequency range preferred by professional filmmakers, videographers and television studios. Typically, the UHF range used by wireless microphone systems runs between the 400 MHz to 900 MHz range, although much of that has been allocated for other usage by the FCC and much of it requires a special license. UHF wavelengths are much shorter in comparison to VHF, allowing for more simultaneous signals to pass near each other without interference.

Using a wireless microphone in the UHF range has its advantages, as you have many more selectable frequencies, the hardware can be decently small and the antennas can be much shorter than VHF. Many UHF wireless microphone manufacturers also offer the advantage of having dual-channel systems for use with cameras (such as Azden’s 330 Series Dual-Channel Wireless Microphone Systems). Since the UHF range is more crowded with wireless devices and signals, it helps to have a larger amount of frequencies to choose from so as not to interfere with others using similar equipment.

UHF also gives the advantage of a decent operating range: usually 100 meters or more, not always requiring line-of-sight. As the distance between the transmitter and receiver increases, line-of-sight becomes more important, but UHF signals can still go around corners and through walls in many instances.

The UHF frequency range suffers in that it is quite crowded, having less and less available range for license-free usage. Much of the UHF frequency spectrum is swirled in regulatory uncertainty, as the FCC tends to reallocate areas of the spectrum for mobile hardware and other government usage every few years. Currently, the upper 400 MHz to lower 500 MHz range is open for license-free usage for wireless microphone systems, as well as the upper 500 MHz range. Additionally, there are a select few manufacturers that are making kits that operate in the 900 MHz range. Even with crowding and uncertainties, UHF is the go-to range for professionals.

The 1.9 GHz range was originally designated for cordless phone operation within private homes and businesses. But as the cordless phone market quickly died out with increasing usage of mobile phones, this range had become more available for license-free and interference-free use of wireless microphone systems. There are still cordless phones being used at the 1.9 GHz frequency, but the odds of getting any interference from them nowadays are quite small. Most cordless phone technology has moved to the DECT 6.0 technology, leaving 1.9 GHz more open for other uses.

1.9 GHz appears to be ideal for wireless microphones, but most manufacturers are not making systems in this range currently. One reasons for this is likely to be that technology development has favored 2.4 GHz as the FCC speculated at one time about allocating 1.9 GHz for other uses. Another reason is likely that the band available in 1.9 GHz is much narrower than 2.4 GHz.

Since it’s such a small frequency set, the systems that do operate in this range are typically point-to-point operation only, meaning the transmission signal can only pass from 1 transmitter to 1 receiver. While not the most popular or widely-used frequency range for wireless microphone systems, 1.9 GHz may see increased usage as the UHF range becomes more crowded. 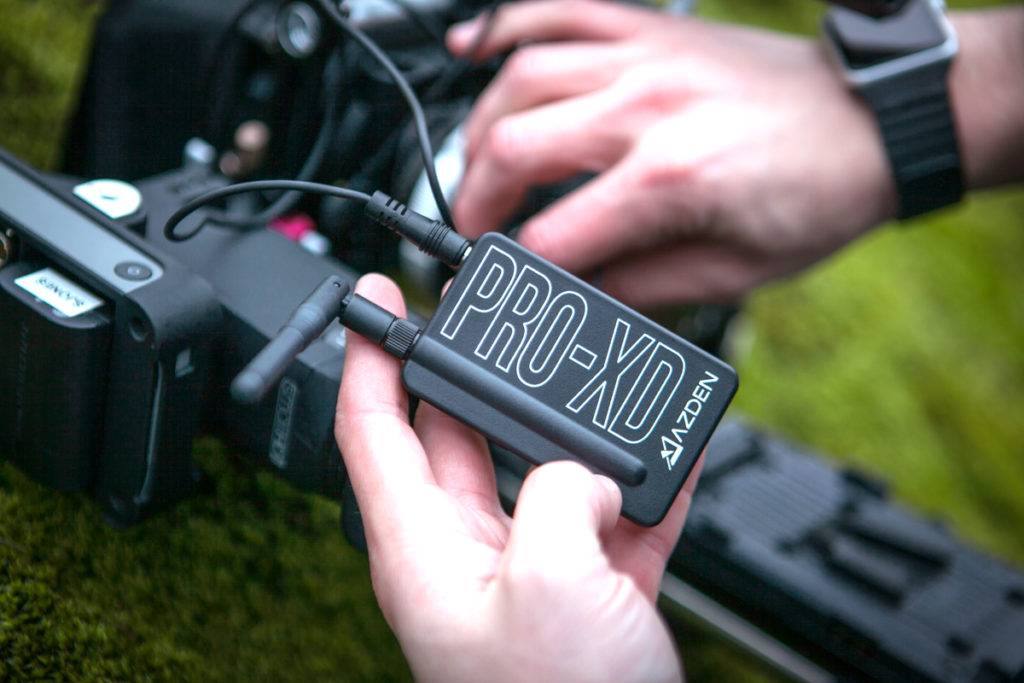 The 2.4 GHz wireless range is widely known as the same range that Wi-Fi signals transmit. Almost all Wi-Fi routers will transmit their signal in the 2.4 GHz and 5 GHz range. 2.4 GHz technology for wireless microphones is still new to the market but seems to be used mostly by entry-level and prosumer customers. Many of these systems, like Azden’s PRO-XD 2.4 GHz Digital Wireless Microphone System, tend to be digital, as opposed to analog, in their audio transmission; and being as such can offer a higher quality audio signal than VHF or UHF wireless microphone kits.

A huge advantage to using 2.4 GHz for wireless microphones is that it’s license-free worldwide (with a few exceptions), so using it in multiple countries or regions isn’t a problem. This range does have some small drawbacks, including the dependency on line-of-sight and crowding from existing Wi-Fi devices in the area. 2.4 GHz signals are blocked well by the human body, so 2.4 GHz system transmitters are often best worn on front of a subject’s body, as opposed to behind the body with VHF and UHF transmitters.

Also, with the crowding from other 2.4 GHz signals in almost every home and business, this can make recording indoors slightly more tedious. In actuality, crowding only cuts down on the operating distance between the transmitter and receiver. The more Wi-Fi signals that are present, the closer the transmitter should be to the receiver while trying to maintain line-of-sight. However, shooting in ideal conditions with good line-of-sight, many systems can achieve close to 100 meters in operating distance. If the ideal conditions are met, recording audio with a 2.4 GHz wireless microphone system can be a cost-effective, high-quality solution.

Wireless microphone systems in the 5 GHz frequency range are very new to the market and haven’t seen widespread usage yet. So far, the limited amount of systems available seem to be utilizing the upper part of the range, around 5.8 GHz.

The 5 GHz range shares many traits with 2.4 GHz in that they’re both used for Wi-Fi transmissions. But fewer networks operate in 5 GHz and therefore microphone systems in this range are less susceptible to interference and crowding. This may change though, as more wireless routers are utilizing the 5 GHz spectrum. As a general rule, the higher a wave’s frequency, the less distance it can travel through or around obstacles and without any sort of degradation.

One drawback to 5 GHz compared with 2.4 GHz, is that it’s even more dependant on line-of-sight to operate at its best; due to the shorter wavelengths, the maximum operating distance between the transmitter and receiver is much less and the ability to deal with physical obstruction is reduced. This makes 5 GHz less ideal for capturing audio from a great distance and more suitable for close-proximity interview type situations.

Usually, an absolute maximum operating distance of 30 meters is the most one can achieve, while the typical operating distance is no more than 10 meters. While impractical for most professionals, some entry-level users may still benefit from using 5 GHz wireless microphones. However, the technology is quite new and will likely see further development and increased usage in the future.

Keeping An Eye On The Future

Maura to William Klayer 38 minutes ago

Cinematography an hour ago

Location Scouting an hour ago

Photography an hour ago

Horror Filmmaking an hour ago