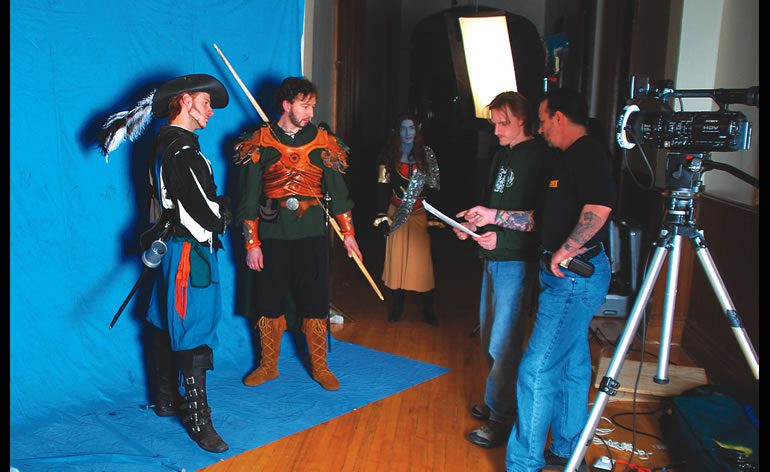 Action films are popular throughout the world. No matter what country or language, action is an easily translated medium. An abundance of moviegoers love to see fights, explosions, car chases, high falls and other stunt related feats; the more intense the action, the better. To meet the needs of this audience, movie makers have put every effort into intensifying the action in their films. In doing so, both Stunt and Special effects budgets have increased dramatically to produce more elaborate scenes that will stimulate the “Adrenaline rush” that the audience has become accustomed to.

Although this type of film is very popular, it is difficult for independent and/or student filmmakers to accomplish due to budget constraints. However, despite the obstacle of money, many filmmakers still attempt to deliver action sequences in their projects. Unfortunately, in order to make this happen, these filmmakers make the mistake of hiring sub-standard performers. Local martial artists, a cousin who own lots of guns, or friends who are just willing to put themselves in danger for the thrill of being in the film. This is a huge mistake. Professional stunt performers may be more accessible than you think. Make an honest attempt to find a local established stunt coordinator with verifiable credits. Even if they cannot help you directly, they may be able to provide you with names and numbers of qualified performers. Having these performers will make scenes progress faster, the action will look better on screen, and most importantly, they will be focused on saftey.

With all this in mind, here are some basic concepts that every filmmaker who is shooting action should be familiar with.

The action in a fight scene must appear to be realistic, but it is never real. The body is rarely struck hard, there is no real damage and no one ever really dies. This is a point that should not be taken lightly. Real force is unnecessary. Unfortunately, this point is easily forgotten when comparisons are made between “Authentic” fight technique and “Artistic” fight technique. One must keep in mind that film combat techniques are not Martial Arts, but Theatrical Arts. Each movement appearing on the screen is designed for only one purpose, to increase the overall dramatic impact of the film.

The major difference between real fighting and film fighting is contact. There is little or no contact made during a stunt fight. Never fall prey to the actor or stuntplayer who wants to actually strike you because they want to “Make it look real.” It is never acceptable if anyone hits you with an excessive strike that was obviously not an accident. The trick is to give the audience the impression of contact. In situations where the effect of realism cannot be reproduced without contact, you can be sure there is a way to cheat the technique using a creative camera angle.

Before any strikes are thrown, the performers first gauge their distance by extending their limbs toward one another to ensure they are well out of reach. Once a safe distance is secured, the performers can begin launching their attacks. The true secret to maintaining this distance is to flow off of each others movement. If one advances, the other retreats to maintain the safe distance.

The illusion of impact
It is easy to trick the camera when fighting. Never let anyone tell you that you must “almost” hit someone to make it look real. In most cases a punch or kick can remain at a very safe distance from the area it appears to strike. This is important to remember because as adrenaline kicks in, actors are prone to “Accidentally” connect with their target. If you properly stack the action, there is no need to get too close with a strike.

PHYSICAL DIALOGUE
Another major difference in film fighting is that of perception. In the Martial Arts, the focus is always on the opponent and how you can breach their defenses. In film fighting, the focus is on the actor, the staged effect (drama), and how the audience will respond to the action. If the audience doesn’t understand the fight it loses it’s effectiveness. Each time you engage in combat with someone on film it is simply a matter of “Projecting” and “Receiving” energy. This is known as “Physical dialogue.” In essence, the combatants involved in the scene must communicate without speaking. They must talk to one another using subtle changes in weight distribution, eye contact and controlled attacks. If one is capable of maintaining this type of communicative state with their partner, their fight will appear real.

Visual Communication
Non-verbal communication is imperative to film combatants. This small action allows actors to understand that a strike is coming and from which direction it will travel. This technique takes years of practice to perfect. As the skill increases, the moves become more subtle and the ability to anticipate each attack becomes more natural.

CROSSING THE LINE
As all stuntplayers are taught, there is a specific technique used to make a hit look believable. That technique is to cross the line between the camera lens and the target being struck. If this is done properly, the strike will appear to have impacted on the target without ever actually having come close to actual contact. To be effective in the application of this technique the stuntplayer must have a constant awareness to the camera’s location at all times.

The gate of the eye

A good face hit usually requires that the punches are thrown level with the eyes. This is because if punches are thrown too low, it can appear as though the strike hit the neck. This is especially true when the fight is shot from behind, making the punch disappear behind the body of the person being struck.

The best way to learn to sell a hit is to pay attention to the direction the incoming strike is traveling. The sell must match the trajectory of the impact. If a punch is coming from right to left at eye level, the recipient of the punch should snap their head to the left in accordance with the plane in which punch is traveling (follow its energy as it passes).

Hits to the head

The most important thing to do when selling a hit is to isolate the area being struck. In cases where the head is struck, the actor should make sure that the head is the first thing that moves in response.

A common mistake is to turn the head and shoulders in unison, which looks bad because its very rigid. The shoulders should move only when the head has been turned to its maximum range.

Hits to the body