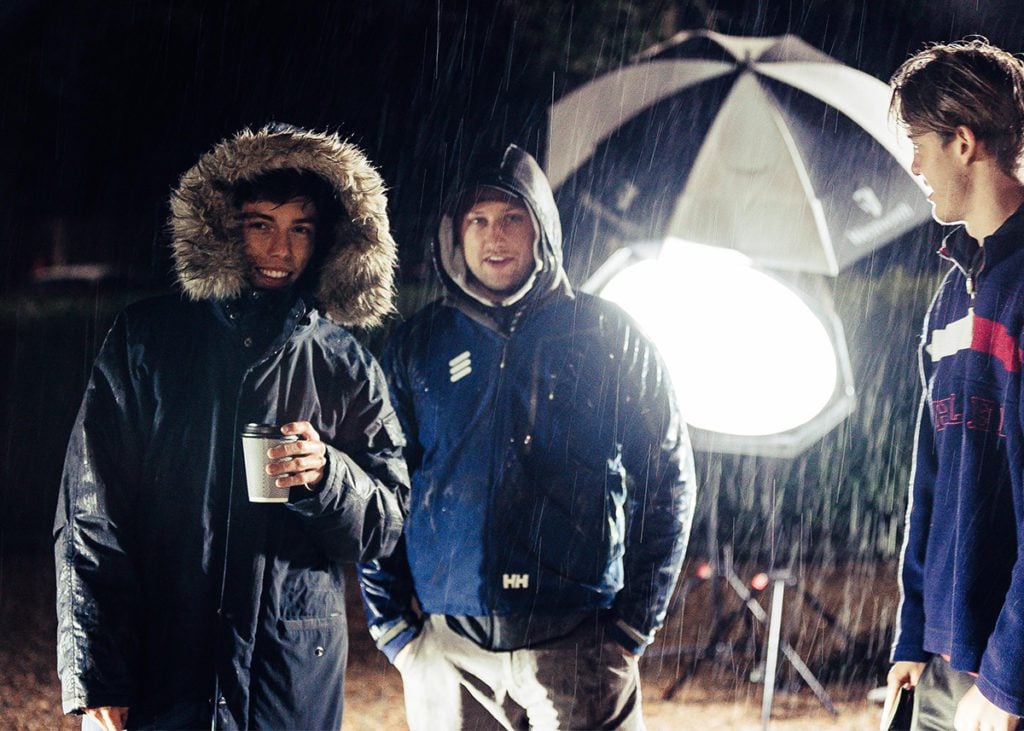 From Concept to Festival Premiere

Parked outside a remote hotel in England, Herbert and Jacinda are meeting for the first time. Both of them know what the mission is: Kill the woman in Room 29. But are they about to administer justice or commit cold blooded murder? Only one of them knows the truth.

COVID-fatigue is a real thing in the creative industries. But what we can never get enough of is a happy story that transpired during this godforsaken pandemic. Hello! My name is Benjamin South, I’m the director and producer of “The ARK,” a sci-fi short film officially selected to premiere at LA Shorts International Film Festival.

Like everyone else, I am sick and tired of hearing how COVID ruin someone’s ambitions, dreams, or plans. I choose to see the silver lining in every challenge, including how my career as a filmmaker kicked off.

My story starts back in 2019, on a flight back from London where I am from to Los Angeles, where I was studying film, I stumbled upon “Virus,” a science fiction short story by A.M. Khalifa, a thriller writer based in Rome, Italy. On a whim, and not a lot of money, on my next trip to the UK, I flew to Rome to discuss his short story. The First Act felt like a cohesive story on its own that fit a Three Act Structure while leaving audiences wanting more. He agreed to partner with me on this film. I was thrilled and a long journey of friendship and creative partnership kicked off.

I began my thesis film pre-production the summer of 2019. So, I called Scotty Schwartz-Owen, my co-producer, work partner and most importantly valued friend. The first thing we changed was the title of the project “Virus” to “The ARK”. We felt that when you received an email and the subject said, “Virus,” people would be less inclined to open it. And given how the pandemic played out, I have to say we were quite prescient in canning Virus.

We worked tirelessly to construct the pre-production of “The ARK”. The first mission was a crowd funding campaign. But how do you raise money in an oversaturated market, where everyone is asking for your dollar? As a filmmaker, I though the best way to do that was to shoot the very best appeal video. If a filmmaker is asking for your support, well, they may as well be able to show you, even a few minutes, of what they can do. And it worked. We raised over $15,000 from friends, families and fools (as the saying goes).

But $15,000 wasn’t nearly enough. Especially for the vision of the production that we had in mind. To tell the story in the way it needed to be told without cutting corners. So, I hit up every wealthy person I knew, and was able after a lot of blood, sweat and tears to raise another $15,000 from private investors.

Next came the location. Scotty and I scouted over twenty hotel locations in Los Angeles and further afield. Some of them quoted $10K a night. It wasn’t until we found the Airtel Hotel in Van Nuys just six weeks out from production that our location was settled.

We were set to shoot in Los Angeles from March 21 through March 25, 2020. On March 12th, we finished casting late, and murmurs started to emerge of my NYFA, my school, shutting down. I was constantly reassured that wouldn’t happen, and we should continue to prep the shoot. Around March 13th, it started to reek of a meltdown as lockdowns began to simmer. Within a few days, my DP who was supposed to fly in from London was hit by the travel ban, and not much later, our entire production was shut down.

There is nothing more painful than making that call to your cast and crew of forty that your production is shut down and will be postponed. Deep down inside, I knew this was highly optimistic. Rather than postponed, it felt like we were cancelled indefinitely. Devastated, I go back to England to wait out the lockdown with my family in Surrey as opposed to sitting in a small apartment in Los Angeles. For three months, I pondered what I would do with “The ARK” and whether it will ever see the light of day.

Then July came, and for better or worse, the UK reopened. Rapidly. I saw a sliver of an opportunity and grabbed it with all my might. Rather than wait for Los Angele to reopen, I would shift the entire production to the UK. Including casting, crew, locations, everything. I called Scotty and A.M. Khalifa, and they were both as insane as I was and agreed to the decision to shoot in London.

We scrambled six months of pre-production into six weeks. Remember that $15,000 I managed to get through blood, sweat and tears? Well, that fizzled faster than you can blink your eyes, due to COVID-19. But when one door closes, another one opens. We recouped our lost funding by finding a beautiful hotel in Surrey. Wotton House. Due to the pandemic, the hotel was closed, so the hotel’s management was eager to generate any sort of income. It was a perfect marriage. We needed unrestricted access to the hotel, and they really came through for us.

Another silver lining was due to lockdown we could elicit the help of some industry pros on the crew whose credits include “Mission: Impossible – Fallout”, “Fast and Furious”, “Bridgerton”, and the “Harry Potter” franchise to name a few. It felt like a once-in-a-hundred-years opportunity. Help is out there if you’re willing to pick up the phone and guarantee a friendly, exciting work setting and of course: amazing food, which we most certainly did, thanks to The Corporate Chef catering company.

Our casting process was limited, as we needed to find actors in and around London and the South of England who would be happy to travel to Surrey and stay in the hotel for five whole nights. We landed Shaq B. Grant (“Gangs of London”) to lead the film as Herbert and Laura Hanna to star alongside as Jacinda with Carlotta Banat supporting as Gurjeet.

With a global organization at the forefront of the film, it was critical that we had a diverse cast, which we were able to achieve. My Mother always said she wanted a role in one of my films, the same way the director of “When Harry Met Sally” gave his mother the all-important line, “I’ll have whatever she’s having”. My Mum, Caroline stole the show on the rooftops of Guildford. 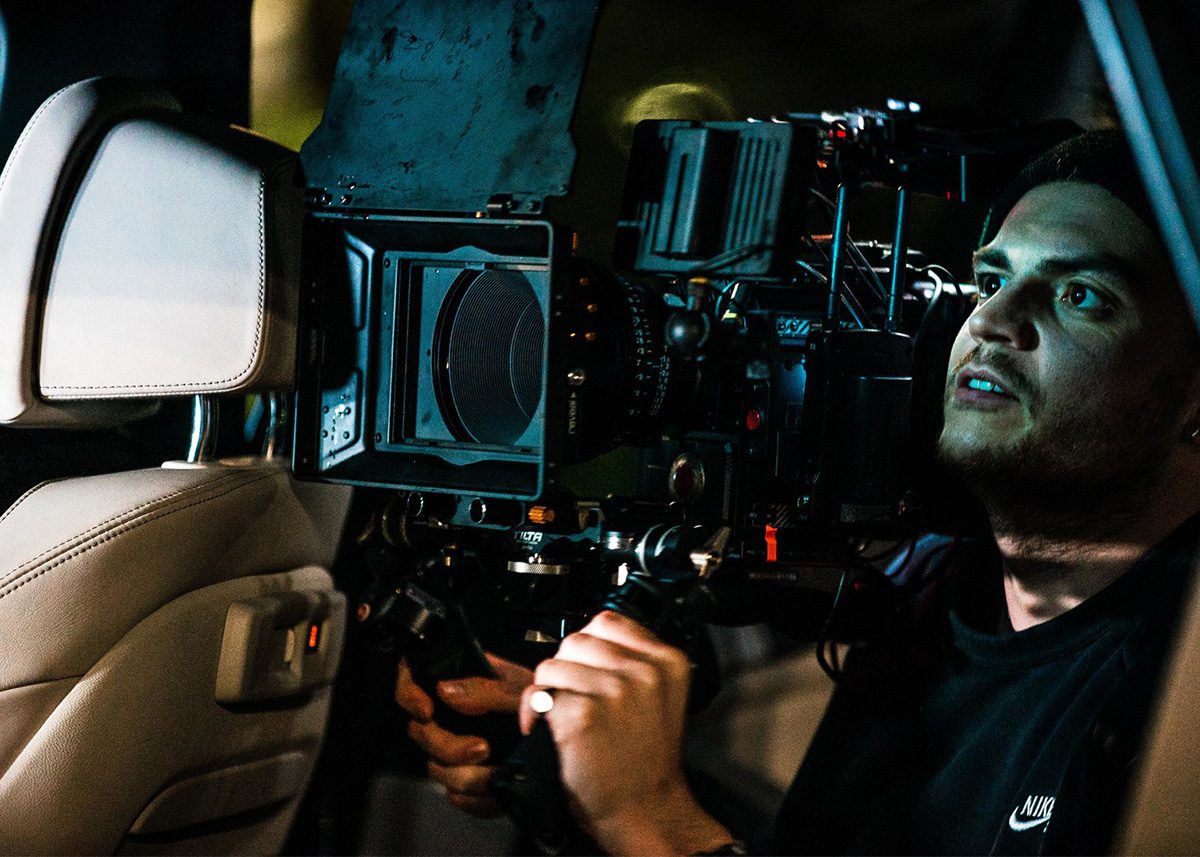 When it came to working with Tom Gass my DP and George Smith (Gaffer) the references were clear, we looked at “Black Mirror”, “Inception”, “Jason Bourne”, “Skyfall”, “Blade Runner” and “Ex Machina”. It was crucial for me to base a sci-film in realism. Of course, it can help keep your VFX costs modest, but I struggle to relate to epic sci-fi when they don’t have tangible assets you can latch onto.

The script called for the story to be told through Herbert’s eyes for the first half of the film, thus all the flash forwards that you’ll see are from his perspective. We shift halfway through to bring “The ARK” into play which creates a strong mid-point twist in the story.

With the help of Jo Winter and Sean Swaby, we shot the film over four nights in cold, wet, bleak, dreary, depressing, rainy (I’m running out of adjectives to describe how the crew, cast and I felt) conditions. It was an ambitious schedule considering how many set ups were needed each night. One night that pushed me to my limit is the scene where Herbert and Jacinda get out of the car to talk at the front, then move to the back, and then, back to the front of the car again for the climax of the film. 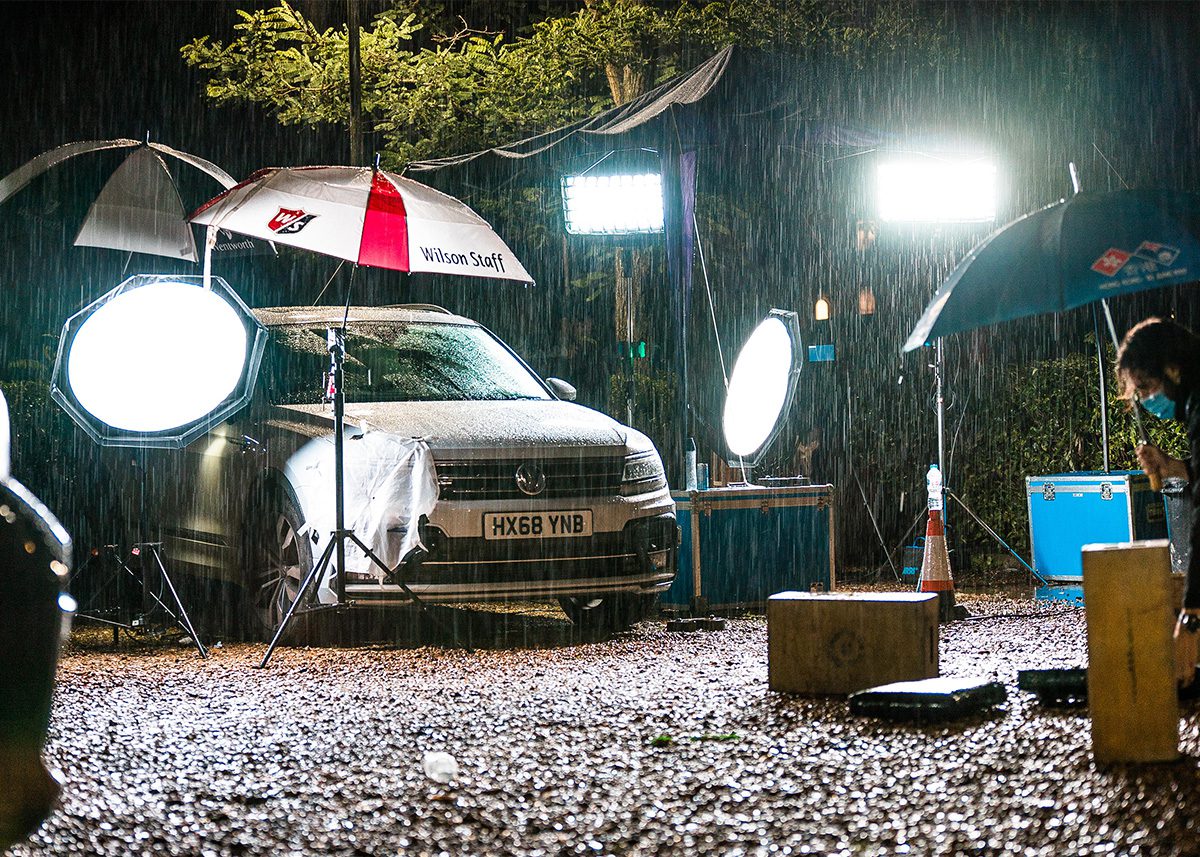 If there’s one thing I learned in the editing process which happened in Los Angeles, you never have enough variety in performance, or inserts. Shaq, Laura, Carlotta, and Vas did a fantastic job with the acting. I wish I’d given myself more variety in the edit at times and asked for the opposite on a take, just to have it so I know I’m safe.

Now it wouldn’t be a short film without the tremendous generosity of many, many people. Thank you to Scott Owen, A.M. Khalifa, Jenna-Mae White, Laura Donaghue, Wayne Fitzsimmons, Martine Jones, Sean Swaby, Haydon Downing, Tom Gass, Kristien Alexandersen, India Edwards and Kat Shields. They all gave up their time and helped us out when they didn’t have to. Also, the Wotton House, Guildford Borough Council, Hurtwood House, CSA, and most of all, to my family who really pulled out all the stops to make sure this film could come to life. 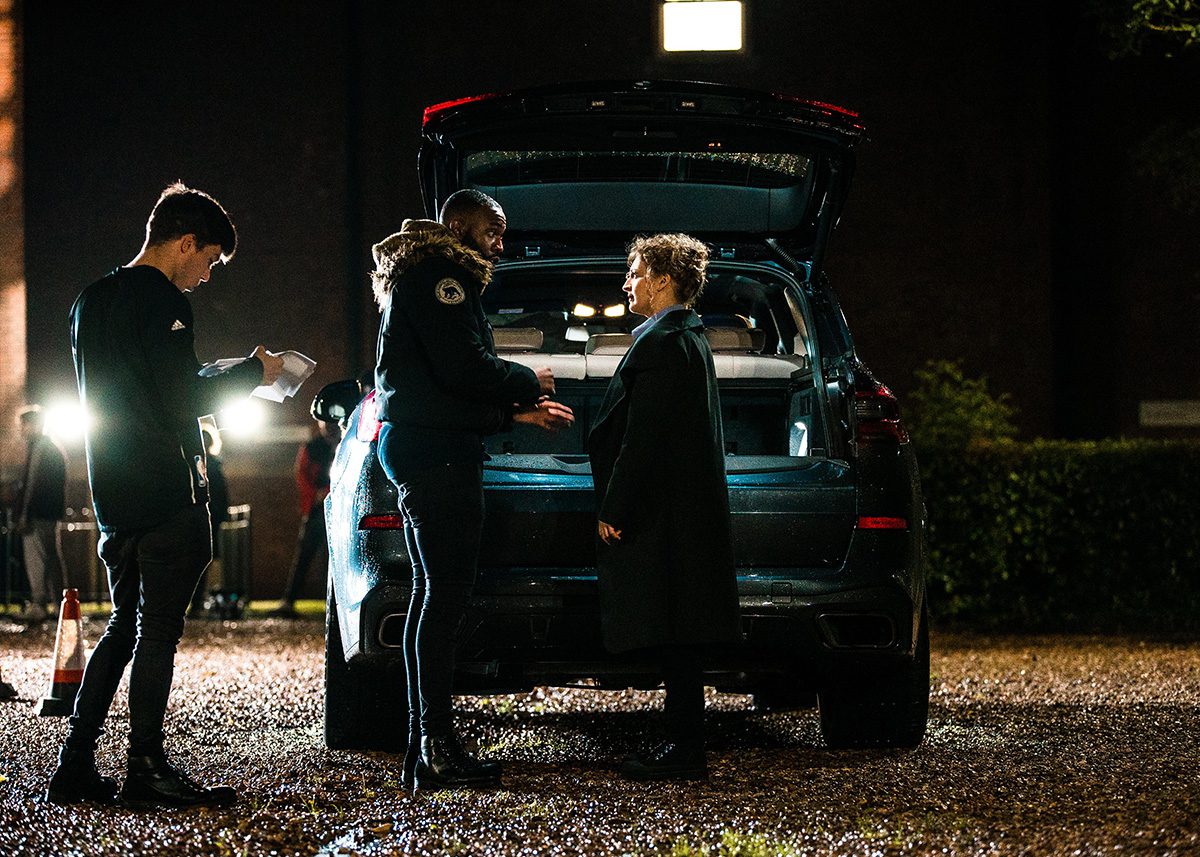 Finally, it was time for post-production. Jonathan Alvord, VFX supervised from 6,000 miles away, trusting me to get all the correct plates and walked me through the process with Tom and his camera team ahead of time. We mixed and sound designed the film with Chris Smith in Santa Monica. If there is one truism I’ll take from film school, it’s that sound is over half of your movie. Chris’ work paired with Christof Unterberger’s breathtaking score elevated our film to new heights. Mitch Martin’s editing was phenomenal, as was Jake Keller’s grading. All of that fused to ensure that the production value was anything but a “student film”. 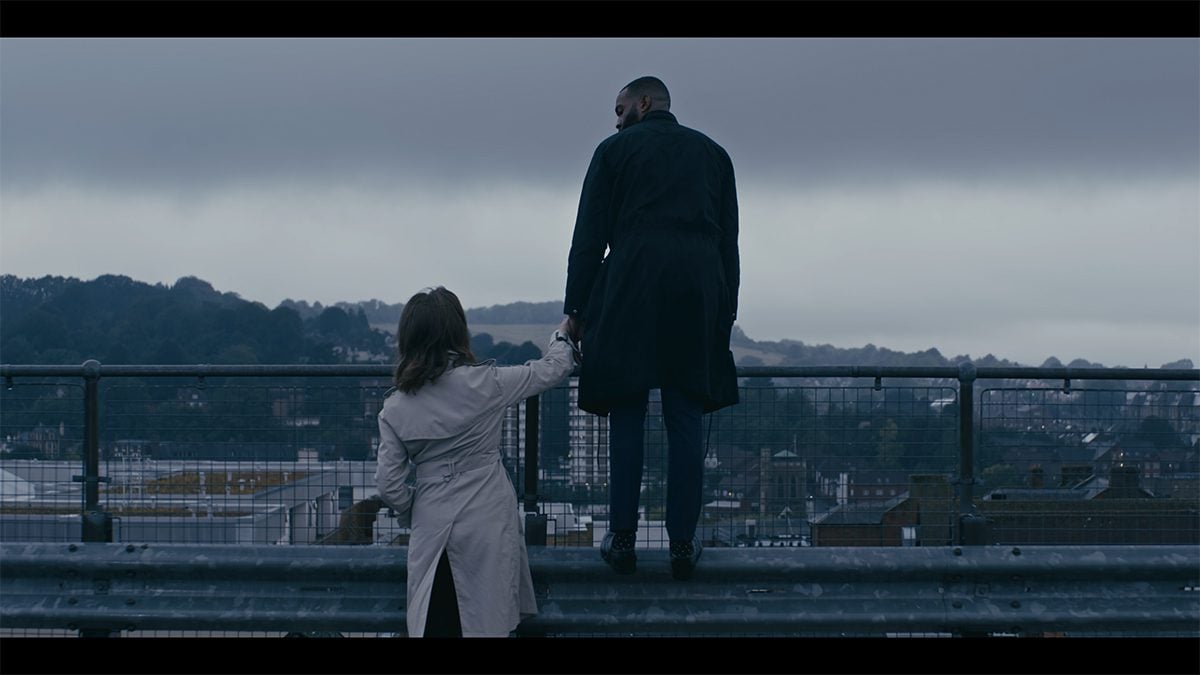 “The ARK” premiered at the LA Shorts Film Festival this summer. Nightpiece in Edinburgh will follow in the fall. We hope more festivals will follow in 2021.

Benjamin South is a writer, director and producer based in Los Angeles, California. He graduated from New York Film Academy, Los Angeles, and currently works at Electric Entertainment. In 2021, Ben landed himself a spot in the Lionsgate mentorship program, along with directing Michael Cimino’s debut music video, “Love Addict”. His latest short film, “The ARK”, made its world premiere at the OSCAR qualifying, LA Shorts in July 2021.

Discuss this top in the Filmmakers Forums Community Online >>