Summer Heats Up: The Reel Story

As the summer heat makes all of us enjoy the invention of air conditioning, production crews who hustle in it, welcome a nighttime shoot. All of us in the production game know hassles of location shooting, but when ‘heat’ is a factor, it seems to really send us on a major burnout.

As temperatures seem to be rising in every corner of our great country, whether from global warming, cows expelling gas or mother earth going through menopause, it’s definitely hotter. So, our need to be smart on how we handle ourselves in daylight heat is essential.

There are plenty of shoots in various locations around the country during a hot day. Heat factors don’t make it easier. Crews must remember that drinking sodas or pop – whatever you call it depending on where your from in the country – can do a lot of damage to your body in outside heat.

Dehydration is a major problem affecting someone before they know it. I maintain if a production company can’t provide enough water on the set, then they don’t have much regard for the crew. When anyone sucks down sodas, sugary drinks compounded by the heat, can mess you up big time. Water is your best friend on location.

Crewmembers need to dress properly, don’t wear black shirts, wear light-colored clothing. Black absorbs the suns rays. Studies have documented ‘heat’ can increase your body temperature by 2 to 5 degrees, so get out the loose, light-colored shirts and shorts. I’m guilty for not wearing a hat, but I’m getting better. Loose clothing is the best. When you sweat, shorts and shirts are not sticking to a wet body.

You might be saying, What’s this guy telling us this for? Well, producers call it liability. Think of it this way: if I hire you, I expect to get what I’m paying for. Since most might be members of a union, I’m paying strong money for you to work. I don’t want to lose you. Or because you didn’t properly prepare for the shoot, you come down with some unknown illness, faint or die on my set. With this pandemic and COVID-19 floating around, productions and crews need to take every precaution to stay healthy.

Another problem is fatigue. One of the many jobs producers need to maximize is production time. Keep in mind their responsibility is to bring the project in OTOB (on time, on budget). They may foolishly keep a shoot going from sun-up to sundown, which equates into a 15- to 16-hour day. From past experience, if you work a crew more than 12 hours (union members forget about golden time) crews get sloppy and make mistakes. If you’ve been working in extreme heat all day, you’ll be so tired when you leave the set, you may not make it home that night. So, if everyone works smart, and the heat will only be conversation.

I remember a very hot day at the Disney Studios in Orlando. I can’t remember the event or name of the shoot, but a stage was placed in the middle of the main park area or now as Disney calls it, “the nose”.  Disney had hired so many older celebrity talents it became an exciting experience. It was time for rehearsals. We were checking and testing the gear while the stage show producers were working with the acts. I was standing off stage when from behind me Mr. George Burns asked me if he was in the right area for the stage entrance. I turned and politely told him he was fine and his ‘mark’ was front center stage. Then I asked him in a puzzling voice, “Are you going on stage to rehearse?” Mr. Burns turned to me, raised his cigar and said, “Yeah…kid…the whole shtick!” Keep in mind the temperature was hitting high 90’s, and there were no scrims, silks or anything over the stage but open sky and hot sunshine.

In the true spirit of Vaudeville this legendary comedic performer walked on stage to rehearse his ‘shtick’ in front of empty chairs. His ‘finish’ was a “soft shoe sand-dance” as the heat became almost unbearable.

I was dazed with what this frail old entertainer just did. Completing his act, he turned and began to come towards me off stage, I stood speechless with respect, he looked at me and in a raspy voice said, “Be a good kid…work on the audio, I couldn’t hear it very well,” I said, “Yes, sir, I’m on it…!”.  The point is this trouper was dressed properly, mentally ready and had a bottle of water with him to do his job.

The memory of his act was stamped in my mind, but the way he handled things while an afternoon Florida sun shined down, humbled me. By the way, I don’t do audio…and that’s…The Reel Story! 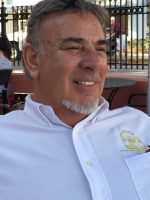 “Prisoners of the Body” is a metaphorical exploration of movement itself. Music accompanies its journey into the world – along

StudentFilmmakers Magazine wants to give a special shout out and THANK YOU to the wonderful students, filmmakers, and professors of

Working for Bollywood: My Experiences in the Assistant Director Department

A Report by Marco Schleicher, MA In 2017, I worked in the assistant director department of two Bollywood blockbuster films.

“Prisoners of the Body” is a metaphorical exploration of movement itself. Music accompanies its journey into the world – along