How to Use Camera Framing as a Storytelling Tool

Reinforce the Intention of Your Scene

Camera framing is a great storytelling tool which doesn’t require a big budget – just some consideration and planning.  When used creatively, the framing of the image and subtle camera movement can subliminally reinforce the intention of the scene and enhance the dramatic moment.  To illustrate, I’ll use some shots from the new web series I’m presently shooting, “The Other F Word”, written and directed by Caytha Jentis.  This is a show about four fifty-something women going through mid-life crises and empty nest syndrome.

In the second episode, Amy, the main character, is told by her husband Steve that he’s going off to join the peace-core to “find himself” for a year.  As he stands at the front door with his backpack, about to leave, he and Amy have an awkward goodbye conversation. At the beginning of the 1 ½ page scene the camera shoots Amy over Steve’s shoulder, but slowly drifts widening the gap between them literally on screen.  The framing never loses the staircase behind Amy that leads back to her normal suburban life. The reverse shots of Steve are from over Amy’s shoulder, but here the drifting camera never loses the door behind Steve and the burned-out windows on one side of the door  – a visual reminder that he is exiting, going off into oblivion.  The slow drift of both cameras provides both a literal and subliminal indication that they are drifting apart, while their backgrounds reveal what is in her past and in his future.

Finally, he says, “I love you,” and hugs her. This was a handheld shot, well executed by camera operator Christine Peskosky, which begins on a tight close-up profile framing of Amy but quickly swings 90 degrees behind her to look directly into Steve’s face as he nests his head on her shoulder.  The handheld swing accents her confusion and how she’s caught off balance by his sudden emotional display.

For the rest of the lines, the cameras don’t drift. They are now basically locked off over-the-should shots and close-ups, a little tighter and with soft eye-lights added to bring out their deep affection for each other in their eyes.  They are both stronger now, accepting what is taking place, so their images are now stable.

The scene ends with a simple eight-foot dolly back from a profile shot of Amy as Steve leaves. He disappears from the frame at the very beginning of the camera move, which continues pulling back ending with Amy standing alone, framed within a frame between her dining room and the living room. The blank walls framing the images edges help make her look all the more lost and alone in her own home – a feeling of emptiness that the viewer instantly gets.

There are other cut-away shots – one from the floor behind Amy’s feet as Steve’s feet disappear out the door into a burned-out whiteness – another wide from the top of the stairs behind Amy of her as he opens the door.  Tight and wide, extreme opposites that lends visual variety even to a simple one and half minute dialog scene.

The sequence ends with two additional single locations. First of her looking around her daughter’s empty bedroom shot from the hallway, then another frame-within-a-frame of her alone in her large, but now empty, master bedroom – making the bed in a streak of venetian blinds light.  Here the lighting, created by a simple source four with a window gobo pattern in it, and the framing from the foot of her bed but with edges of walls closing in on her, provide a visual metaphor for her being left behind in a sort of solitary confinement – a feeling of being a prisoner in her own home.  The frame-within-a-frame compositions conveys a sort of spying in distance for the viewer – making us feel that she is even more alone as even we aren’t there with her. .

In these simple to execute shots, the camera framing was created to help support the emotional moment of the script and the performances of the actors.  This simple scene could have just been shot with standard coverage – wide shot, close-up him close-up her. And while that certainly would allow all the dialog to be covered, it wouldn’t enhance the storytelling – it would just record it. Cinematography isn’t recording, it is the Art of photographing the moving image. What makes anything art is the artist trying to convey some kind of message. As cinematographers, it is our brushwork that helps the director bring the screenplay to life  – to help tell the story in a subtle artistic way whenever possible. It isn’t making incredibly difficult camera moves or extremely long steadi-cam shots because they’re cool or impressive. It’s doing what we can with simple framing and small moves that convey a feeling, a tone or a message. Doing this is the difference between being a camera operator and being a cinematographer. 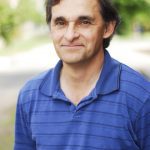 David Landau has worked 30 plus years in lighting for features, TV,  commercials, documentaries, industrials and music videos. He teaches lighting and cinematography at Fairleigh Dickinson University, shoots low budget features and corporate videos and summers as one of the gaffers on Project Runway. Five-time Telly Award winner for lighting and cinematography and an IATSE Local 52 member, he authored the book, “Lighting for Cinematography,” from Bloomsbury Press. 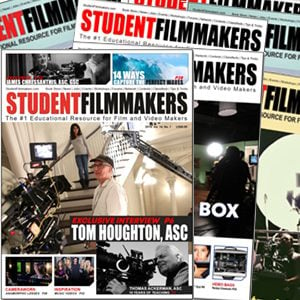