Q&A with Logan Calder and Austin Segal on Short Student Film, “Two of These Things” 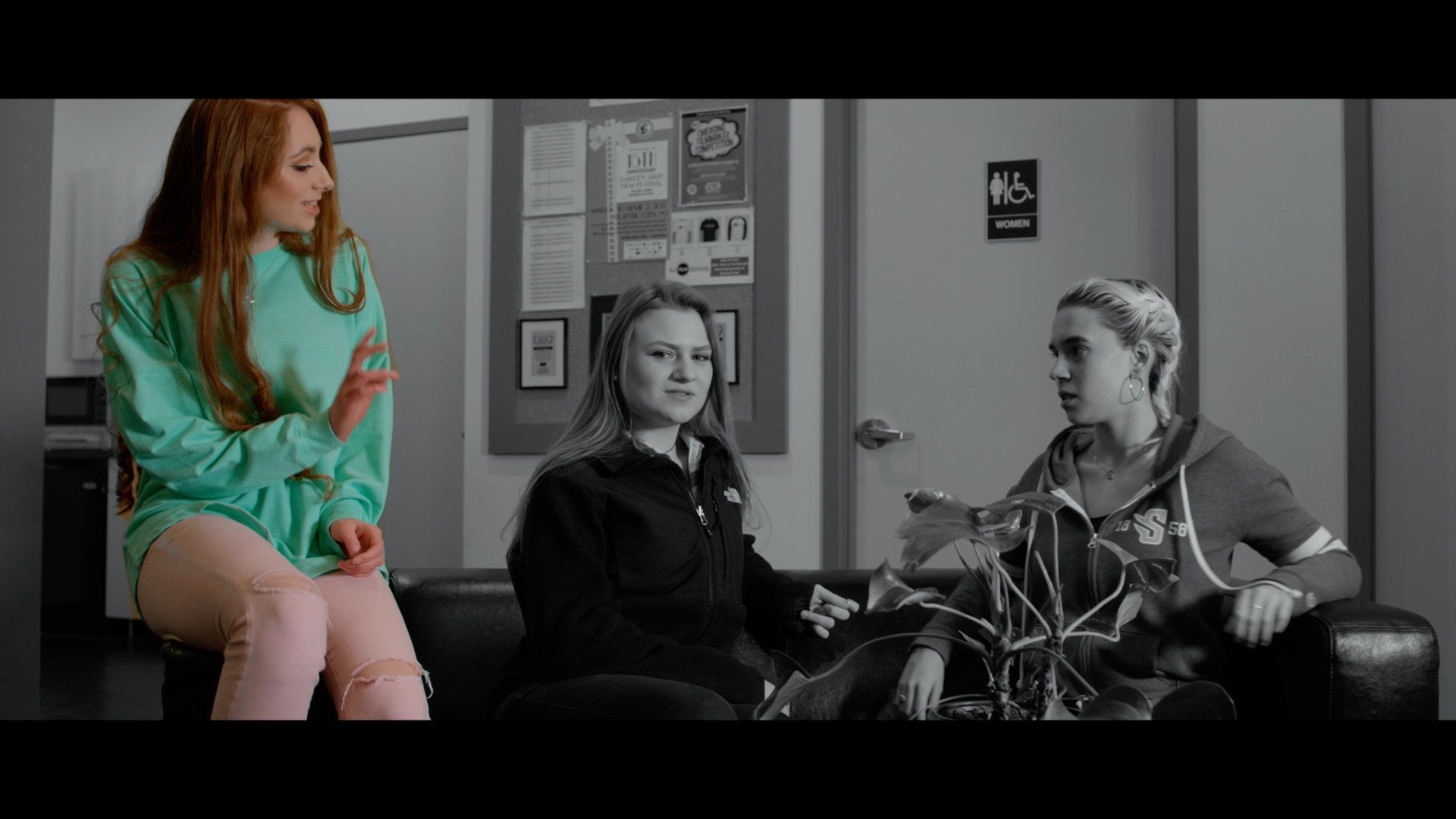 Logan Calder (Writer and Director) and Austin Segal (Cinematographer) received the 1st Place Award in the Highschool / Junior High Category for their short student film, “Two of These Things” in the Summer Shorts Film and Video Contest (2017), hosted by StudentFilmmakers.com. Interview published in StudentFilmmakers Magazine. 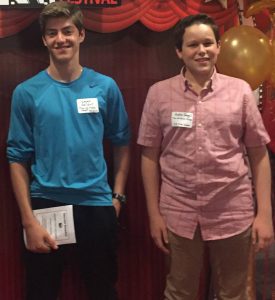 STUDENTFILMMAKERS: What inspired the “story” for “Two of These Things”?

Logan Calder: There are a lot of really creative people in my life that inspired this film because, at its core, it’s about those who stand out and, rather than conform and cause others to do the same. Particularly, I was inspired by a friend of mine named Terry DiFalco who passed away last year after being hit by a car. She really embodied the themes of Two of These Things more than anyone. The town I live in is very conformist – almost everyone belongs to a country club and looks and dresses exactly the same – and I think that as a result, it is very important to me to try to highlight the fact that those who stand out serve as inspirations to everyone else, and maybe that will cause people to be more willing to stray from norms rather than abide by them.

STUDENTFILMMAKERS: What tools did you use from development to post?

Logan Calder: Between development and post-production, a lot of what we used at the film school came down to camera setups like dollies and different lenses to allow us to shoot the interesting shape of the classroom we used, but the real test came down to our use of Final Cut Pro to get the coloring that the entire film really relies on.

Austin Segal: One of my personal favorite tools we used during production was the dolly. As the cinematographer, it was my job to push the dolly forward and back, which required a three-person team, including people to hold the sound equipment and aid in dolly movement. I love the look of moving shots; they make the film seem alive and active.

STUDENTFILMMAKERS: What were the some of the most important parts for you in regards to Development to Post?

Logan Calder: When it came to actually developing the film, it was very important to me that there was enough content we could film within our allowed two hours at the film school to really make an audience feel for the main character and root for her, which is not easy to do with so short a piece. After that there was a lot of technical work which was pretty difficult for this type of film, and also just trying to figure out different shots that would work in order to reflect the main character’s multiple conflicting feelings. On one hand, she feels heavily scrutinized for her color in contrast with her black and white surroundings, which I wanted to represent through close-ups that really show her being confined and also somewhat introspective, but on another hand she also feels distanced from everyone else for her differences, which is represented the opposite way, with wider shots that literally show physical distance. This was a real hurdle in terms of the style I wanted to use to shoot the film, but the solution came down to alternating between the two types of shots depending on the specific moments where they take place. Finally, for a film like this where any form of dialogue is almost non-existent, music almost becomes a character of its own, and if the music was wrong, the whole movie would be wrong, so that is always one of the most important post-production decisions we have to make.

STUDENTFILMMAKERS: Can you share with us a “Challenge and Solution” in regards to the making of your short film?

Logan Calder: Besides having to decide how to shoot both distance and confinement in the same two-minute film, the greatest challenge we faced for Two of These Things came down to coloring. The New Jersey Film School, where we shot the movie, has a lot of color all over the walls and floors, which made separating our black and white background from our colorful protagonist all the more difficult. There were certain angles we could not shoot at because of a particular poster or paint job that would wind up merging with the main-character’s clothing or her skin or even her red hair, so that seemed like it would be extremely limiting at the start of the pre-production process. We managed to work around this obstacle by cutting or moving shots here and there, but without the phenomenal team I was working with, too many little color details would have fallen through the cracks and the whole scheme would have come out as a blobby mess.

STUDENTFILMMAKERS: If you could share your Top 3 Tips related to filmmaking, what would it be?

Logan Calder: First and foremost, and this has been drilled into my brain by my wonderful teacher, Chris Messineo, at the NJ Film School, story is what drives a film. You could have the most beautiful sets, stunning shots and brilliant actors, but if a story falls short, the whole film will too. It is great to have an idea for something technical that you want to do that you think will make a film better, but it will only work if the story is captivating and nothing feels overdone or forced. Second, while it is not always possible with the way a scene unfolds, it is important to consider for each and every shot if it would grab your attention as a standalone photograph. Could you freeze-frame your shot, print it out and hang it on a wall? That’s the question I try to ask myself when I shoot. It isn’t easy, and I sometimes find myself falling short of that goal, but that is when I need to stop myself and take the time I need to think through my shots and remember that each and every one is its own work of art, and deserves to be cared for as such. Finally, there is nothing more important for a filmmaker to do than to push themselves to accomplish things they or anyone else never have before. As a student filmmaker, this can be challenging, and my main focus is doing things that the NJ Film School has never done before, but one look at a film like the Blair Witch Project can show that anything is possible. Like the main character in Two of These Things, films are celebrated for the ways in which they stand out.

Austin Segal: You learn to film by filming. If you want to improve yourself, try it out and see what works. Plan everything you can. Films turn out better when they are well thought-out. “Winging it” doesn’t always work out well in the end. Trust your instincts. If you believe in an idea, go for it. Trust your abilities as a filmmaker.

STUDENTFILMMAKERS: What are your thoughts about being selected and winning one of the top placements in the contest?

Logan Calder: Having a movie I wrote and directed win this award was both completely unexpected and a huge honor. Because this film was made for the NJ Film School, my teacher sometimes submits what we create to awards without the knowledge of my classmates or me, which made it all the more exciting when I received an email out of nowhere saying that Two of These Things had been chosen by this magazine as the best High School Short Film.

Austin Segal: It’s such an honor for a film I worked on to even be seen by an audience. For it to be chosen is really satisfying because it shows that other people in the world enjoyed it. For me, anybody being moved by a film I worked on is fulfilling in itself.

Logan Calder: The ideas that I incorporated into this film all came in a very interesting and staggered way, so the first stage of writing was honestly just me in my bedroom throwing sticky notes with different random thoughts onto my wall. This lead to a lot of subtle little moments where the themes of the film are pushed further and further into the minds of the viewer, such as the colorful pencil among grey pens in the beginning, as well as a Sesame Street Clip that shows how we are all taught from a young age to feel negatively towards things that are different, and it all culminated into a fairly short film that I really tried to pack with thematic reinforcement. Finally, something I heard from time to time after I finished the film had to do with the ending, and people would tell me how bothered they were that this was another movie having a female character saved from her troubles by a man, and that just is not what the film is about. If you look at that very last shot where the boy sits down, look at the look the protagonist gives him. This was something we took time to perfect on set, because it isn’t that the main character feels as though she is being saved or is taking a breathe of relief, she is reflecting on the impact she has had on the new boy, and that was something our actress, Nicole, did very well conveying. So, it really is not a man saving a damsel in distress, but rather, it is the main character that saves the boy, inspiring him to embrace his colorful side and everything that makes him different.

Austin Segal: It was such an honor to work with such amazing people. Logan Calder is honestly the best student filmmaker I’ve worked with, so I knew a film written and directed by him would turn out great.