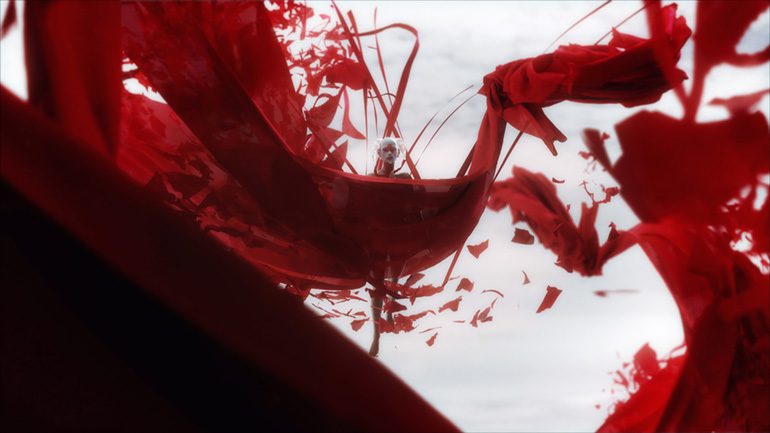 “SIMULACRA” is a multiple-immersion experience that incorporates live action shooting/motion capture/3D scan and 3D motion digital art. It is about an elderly Buddhist woman recalls a ritual from her past, undertaking a journey of duality expressed through her many identities.

STUDENTFILMMAKERS: Can you talk about how you employ your background in 3D motion design and graphics as a storyteller?

Curry Sicong Tian: Born and raised in China, the deep-rooted Chinese heritage influences me a lot, and I am aiming to bridge the gap between eastern and western culture, video art and film, expanding beyond into 3D motion graphics and alternative modes of storytelling, I think 3D motion is just a proper or useful tool to convey the idea, not essentially.

Alexa Velasquez: I began learning about 3D Motion Design early this year and have truly enjoyed producing and helping in the creation of expansive and surreal worlds that are made possible from this medium. I am currently using 3D motion design for visual development and concept art for music videos and narrative films.

Jumai Yusuf: With the worldwide pandemic forcing us all to say at home, I believe animation and 3D motion design has become absolutely vital for filmmakers who want to create expansive worlds without putting a large cast and crew at risk. The abundance of free 3D software and 3D assets is a great equalizer that allows someone like me to tell stories in the fantasy, sci-fi, surreal genres while still on a film school budget!

STUDENTFILMMAKERS: With all of your capabilities in digital manipulation, are you still concerned with the precise details of lighting onset?

Curry Sicong Tian: I think post production created more room for fixing the problem, but the precise details of lighting is still very essential, the same logic with people are still indulging with shooting on film, it has the different aura, and lots of textures that could not be fixed by post.

Jumai Yusuf: Yes, of course our film was a unique combination of 3D elements and live-action footage, so the lighting on set was still very important. We also worked with projectors and green screen which present unique lighting challenges.

Alexa Velasquez: Absolutely! While the possibilities of post-production are endless, it is still extremely important to be specific about the lighting scheme and cinematography if live action footage will be a part of the final project. It is all a part of the director’s vision, and there are certain things like undertones, exposure, certain colors that require specific, preplanned lighting to look how it has been envisioned. Good lighting also helps to mix the two – digital and live-action – much better.

STUDENTFILMMAKERS: Filming “Simulacra,” what was your most challenging scene to shoot and light?

Curry Sicong Tian: It was definitely challenging, and my working process takes on many forms. While I work and conceive, I’m truly and fully led by imagination and intuition, not so much a specific structure. For “Simulacra,” we have three main scenes: black background, greenscreen and the outside desert. I would say the most challenging scene is the desert because we don’t really know how is the weather gonna be, and there is a crunch time allowing us to do the lighting. Basically, we are tracking, using, and reflecting the sunlight, but my DP might have a more professional answer. [laughs]

Alexa Velasquez: In terms of shooting, the most challenging day was our day out in the desert, as we were in an extremely beautiful but remote location and only had the sunlight hours in which to shoot. Additionally, we shot in early January during much harsher, colder weather than normal and that also affected cast and crew needs overall. It was our first time in pre-production for a shoot that required portable electricity and energy, so Curry, Jumai and I had to consider and fully plan a lot of logistical things that could then change at any moment the day of, but it was honestly such an exciting experience overall. The entire crew, from grips to the art department to camera to our cast, really kicked ass that day.

Jumai Yusuf: Filming on location in Lancaster, CA, was definitely our most challenging day. We really filmed in the middle of nowhere, so we have to truck in all of our equipment, including a huge jib, electricity, set pieces, tents, heating, food, you name it! Thankfully, we had an amazing crew and performers who did not let the harsh elements slow them down at all. 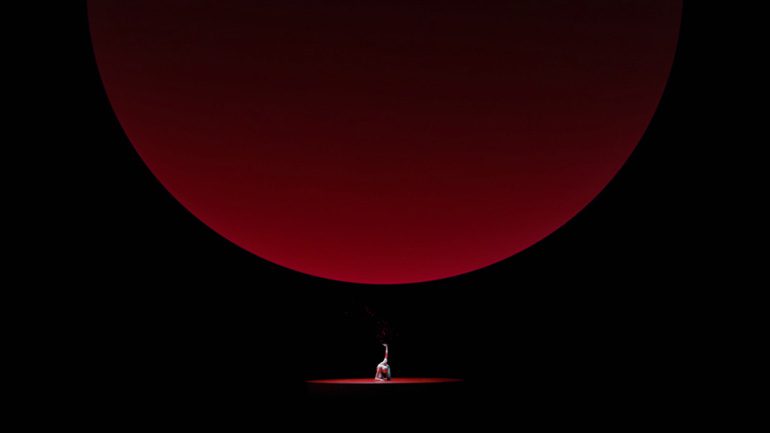 STUDENTFILMMAKERS: If you could share your Top 3 Experimental Filmmaking Tips for new and aspiring filmmakers, what would they be?

Tip #1: Although there is no narrative storytelling, the concept/story is still essential.
Tip #2: Try not to do too much “reference/image” research.
Tip #3: Enjoy the learning journey.

Tip #1: Be Bold! Don’t be afraid to try something that you [or your professors] have never seen before!
Tip #2: Communicating your vision with your creative team is especially important in this genre. Use as many visual references as you can to help get your ideas across!
Tip #3: Although you’re not following a traditional story arc, still make sure you have a clear idea of what you want the audience to take out of your piece. Is it an emotion? A concept? A single idea?

Tip #1: Trust your tastes and your intuition.
Tip #2: Be patient with yourself because it takes time to find your voice.
Tip #3: Learn the storytelling rules, and then, BREAK THEM.

Jumai Yusuf is an MFA Film & TV Production student at the USC School of Cinematic Arts on the Directing track. She is a Muslim, Nigerian immigrant, who always strives to bring the stories and characters of underrepresented minorities to the screen. She graduated from Harvard University in 2016 with a bachelor’s degree in Neurobiology. Now as a director, she combines her love of science and art in her filmmaking. Her short films have screened at dozens of festivals worldwide including the National Film Festival for Talented Youth (NFFTY), San Diego Comic-Con International Film Festival (postponed to 2021), Houston Comicpalooza, Rockport Film Festival, Chain NYC, and MECCAcon International Film Festival.

In animation, she has produced multiple award-winning animated films with her producing partner, Alexa Velasquez. “Simulacra,” an experimental 3D/motion-capture/live-action hybrid, garnered a 2020 Student Academy Award in the Alternative/Experimental category. “Izzy’s Demons,” a 2D-animated film dealing with anxiety in women of color, won Best Animation at the 2020 Screen It! International Film Festival. “heartsease”, a 3D animated short which she co-directed, won Best Student Short as part of the MacInnes Studio Real-time Shorts Challenge sponsored by Epic Games. She is currently directing an animated music video for India & the Jones and developing feature film projects. Her full portfolio is available at www.jumaiyusuf.com.

Alexa Velasquez is an MFA student in the Television and Film Production program at USC’s School of Cinematic Arts. As an undergraduate Global Health major also at USC, Alexa studied leukemic resistance to chemotherapy and participated in epidemiological studies regarding socioeconomic health disparities at the global level. So far in her film career, Alexa has been involved in Directing and Producing short-form projects across the narrative, documentary and animation genres. She co-produced, “Dream with One Eye Open,” a lyrical portrait about a young autistic artist and her family of Chinese-American women. So far, the documentary has been accepted to the Directors’ Screen awards, Hollywood North Film Awards, Independent Shorts Awards, AFMA Film Festival of Young Cinema, CineCina and several others.

In the animation world, Alexa has co-produced several films with her producing partner, Jumai Yusuf. Together they have co-produced, “Izzy’s Demons,” a 2D animated film dealing with a young Black woman’s descent into her subconscious; “Simulacra,” a 3D/Motion Capture/Live Action hybrid film that is a meditation on Eastern ritualism and identity; and most recently co-created, “heartsease,” a 3D animated film which won Best Student Short as part of the MacInnes Studio Real-time Shorts Challenge sponsored by Epic Games. “Izzy’s Demons” has most recently won Best Animation at the 2020 Screen It! International Film Festival, and “Simulacra” has garnered the 2020 Student Academy Award for Best Experimental Film.

Alexa hails from Los Angeles, CA, where she has been spoiled with good weather and richly dense communities of color her entire life. A portfolio of selected works can be found at www.alexavelasquez.co.

Collie posted an update 18 hours ago