RED ONE: Living Up to the Expectations? First Impressions of the Camera by Jon Firestone 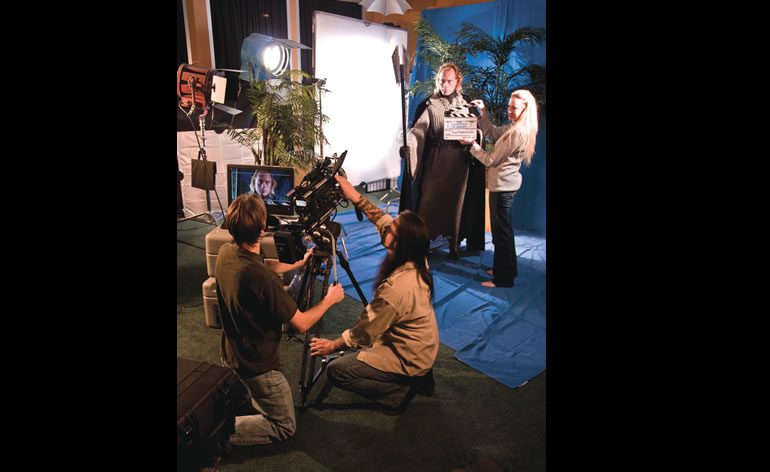 Reference: StudentFilmmakers Magazine, 2015. February 2008. RED ONE: Living Up to the Expectations? First Impressions of the Camera by Jon Firestone. Pages 39 – 44.

Well, the much anticipated Red camera is finally here. Or, at least I finally got my camera, number 232. It’s been nearly two years since the announcement of this extraordinary camera, and now I get to put it to the test and see if it lives up to all of the expectations.

An interesting note is that the development and marketing for this camera is like no other major camera before it. The camera has begun shipping even before all of the features are enabled. Yet there have been several features shot by major Hollywood players on these partially enabled cameras. The public has been kept very involved in the development, including having input on features of the camera. This has opened Red up to a lot of criticism, because not only the good, but the bad has been openly presented and talked about.

So when my camera arrived, I was excited to dive in and see what it was capable of.

The first thing I planned, after figuring out how to turn the thing on and put together the various accessories, was to shoot something that would look great. I knew we would dive into intense testing, shooting charts, and blue screens, green screens, and tests that would generally find the limits of any camera. But before getting ultra critical, I wanted to see how it shot when not being put under such intense criticism.

It shoots like a nice digital SLR. I am reminded again by how much of the look that we associate with being cinematic has to do with the 35mm lenses on the camera. I love shallow depth of field, even if it requires more careful focusing. This camera is capable of creating incredible, cinematic images. Now that that was established, it was time to dive into tougher situations, test some known issues, try some of the newly enabled features, and then, dive into some of the fun and unique features of this camera.

First impressions of the camera. When pulling the camera out of it’s packaging, the attention to detail was very evident. From the tiny ratcheting thumb screws which bear the Red name embossed on them, to the nice finish and build quality of the accessories.

I took the camera over to a large local rental house, and sat down with my lens guy and the studio owner, and they were both impressed with the general quality of the hardware. One even commented on the fact that it looked like it was built by someone who worked with traditional film cameras and took notes on how to do things properly.

This camera is very modular, and can be stripped down to just the body and lens, all the way up to having two sets of rails with hard drives and batteries all on board. As I built the camera, I realized just how big this camera was.

It’s big! I’ve shot a lot on F900 CineAlta style cameras and this feels 50% bigger. I personally prefer a larger camera for a lot of things. I like the stability and smoothness you get from the inertial dampening that weight adds. A friend of mine who does a lot of camera rigging on jibs and cable systems also prefers the weight claiming it adds to the smoothness of the movements.

I’m glad I got the second handle grip for handheld though. But just holding the camera in your hands, it feels professional. The shallow depth of field of most 35mm lenses also makes focusing accurately more difficult. This is when it is really nice to have an AC pulling focus for you, and it is evident that this camera is going to take more support than what we’ve been able to get away with on smaller cameras. It starts becoming a lot more like shooting film, but with really nice video assist, playback, and a ton of the nice things that we get in the video world.

One thing to note is that the camera is much more like film in many ways than a traditional video camera. In fact, those that have experience with film, or even digital still photography with SLRs will probably find themselves more at home with the functionality of the Red camera. It is a fully manual camera; there is no auto anything.

This camera is impressive as a 4K camera, but some of the most fun features really shine when shooting in 2K mode.

Speed ramping is even cooler. It enables the camera to ramp up or down from one frame rate to another while shooting, enabling those cool shots where the action is happening at full speed and then begins to slow up creating a cool dramatic effect.

Another note is currently, the way the camera shoots 2K is to just use the center portion of the image sensor. If you are using 35mm lenses, they will perform more like they would on a 16mm camera. So a 50mm prime will be much tighter than it was at 4K. However, using B4 mounted lenses or 16mm lenses, they will perform as you would expect them to on other cameras, but you are restricted to 2k with them.

The Red camera is not yet completed. It will become quite a bit better with time. This is very unusual for a production camera, but then again, this camera is no ordinary camera. It is probably at least as much a computer as it is a camera, giving it incredible flexibility, and upgradability.

As an early adopter I get to see where it still needs work. Specifically the post workflow is still in its early stages, and easy and efficient workflows are still being developed, which leaves us with some significant challenges in post when working with this footage especially when they are larger projects with lots of media. Red is working hard to make the post workflow much more refined, and it is only a matter of time before the workflows become very workable.

Audio on the camera just got implemented, and I was excited to see how it worked. The camera has 4 channels of 24 bit 48khz uncompressed audio. Currently, the audio is only in Beta, so it’s not working flawlessly.

What I liked were the meters. The meters look great on the high resolution LCD screen, and only the channels that are activated have markings, so it makes it easy to see what is going on.

What is less impressive is the lack of external audio controls. Adjusting levels involve going into the menu system, which makes it less convenient. The camera has a USB jack, for connecting devices to the camera though, and I wouldn’t be surprised if there was a USB audio control device in the works.

While the camera is capable of accepting mic level and providing phantom power, so that microphones can be directly attached to the camera, it is more suited to getting a line level signal from the mixer, where you have easier access to the controls and features like limiters.

This is a cinema type camera, and this is where it excels. It is big, it is heavy, and it takes a more experienced operator than most cameras. It’s also modular, so it can be made smaller than my configuration, but to have a really functional system requires it to grow to a pretty decent size.

All in all, using this camera is a lot like using a film camera. It requires more support, and more knowledge than your
average HD camera. It’s fairly big, it’s relatively heavy, it’s pretty complicated, and it is amazing.

This camera does have some issues that need to be resolved. I knew that coming into this, and didn’t expect it to be perfect on release. I’m just thrilled to have the chance to start shooting with it. I am thrilled with this camera. It produces great images. Sure, there are some things I hope will be fixed soon, especially regarding monitor options.
This is part of being an early adopter, but by the time most people get a chance to work with this camera, it should be much more polished.

So does the Red One live up to all the expectations? I would say that as a cinema camera it truly lives up to, and even in many ways surpasses, what I originally expected from it when I put my deposit down back nearly two years ago. It is not the ideal camera for everything. But for cinematic image, and bang for the buck, nothing else even comes close. For the other stuff…

Jon Firestone developed and taught the 3D graphics program at the Colorado Film School and works as a freelance director and cinematographer when he is not pursuing his other passion as a Visual FX Supervisor and Animator. Jon is a partner in the Denver-based production company, Asgard Entertainment.

Photos: Special thanks to Jeff Deel and Jason Coviello.