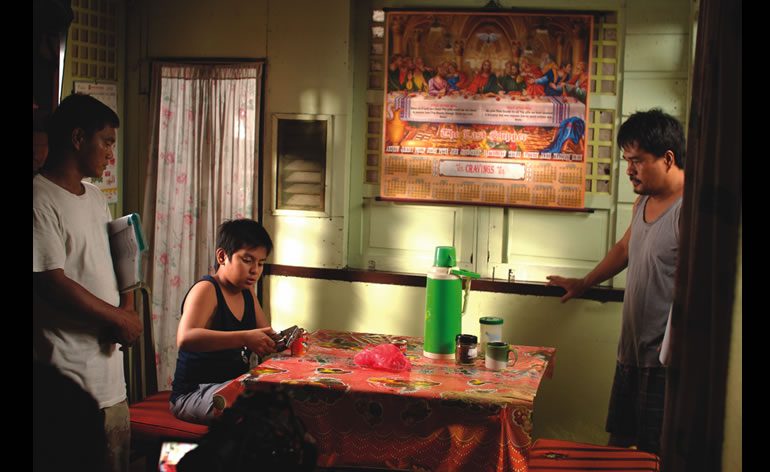 In the cinematographer’s ideal world, we would get every piece of equipment we asked for, and production managers would give us half a day to prepare each setup. However, independent filmmaking reality dictates that we’re more likely to find ourselves four hours behind schedule at 8 p.m. with fifteen setups to go – and that’s when a DP needs to rummage around his bag of tricks for ways to speed things along.

This was certainly the case for several days on a recent shoot I had for a TV mini-series produced independently by the Jesuit Communications Foundation in Manila. No To Christmas! is a whimsical story of four little kids from the barrio who, after going through a sad and miserable Christmas last year, plot to convince their entire village to boycott this year’s Christmas celebrations altogether.

The script called for a diverse number of looks for present-day narrative, flashback, fantasy/imagination, faux-news footage, and a mix of melancholy, impish and joyful moods. We were shooting 2-camera digital, which in some ways helped us adhere somewhat faithfully to our short production schedule, while at the same time presented its own set of challenges.

During one of the days we were playing catch-up with the schedule, we had two scenes that were happening in the same area – a dining room in a small, run-down little house on the outskirts of la. Both scenes had a father and son sitting down for a humble – and uncomfortably quiet – meal. The first scene was written for early morning; the second was a night scene.

The dining room was not a room per se; it was adjoining a small kitchen to the right, and a short hallway leading to the living room where our DV camera, a Panasonic DVX100A, was mounted on dolly.

Because of some delays, we had gotten to the location late, and night had already fallen. However, having to build the scene’s lighting from scratch allowed us to use one of my favorite time-saving techniques. Knowing that we would have to do the night scene immediately after the day scene, my gaffer and I decided to light for a ‘quick change’ setup – one that could morph quickly into the next setup we needed with minimal tweaking.

Through the window on the left side, we shot two 400w HMI PARs (5600K Joker-Bugs), one acting as a backlight on the son seated on the left, and the other one throwing ‘sunlight’ on the wall in the background. Shadows were created with the window frame and some plants.

The kitchen area on the right had a door leading outside. We used another 400w HMI PAR with 1/2 CTO through this door, acting as a lower-body backlight on the father seated on the right, and also providing some highlights on the tablecloth and the lower part of the wall on the back. A set of daylight fluorescents (4-bank Kino Flo) with 216 diffusion and 1/2 CTO on the barn doors was mounted on the ceiling above the kitchen, hiding behind the hallway wall on the right; this gave the father a sidelight (relative to camera) hitting his back.

Behind the curtain-covered door (seen on the left side of the frame) we put up a 2k open-faced tungsten instrument with full CTB and diffused with 216, so the curtain looked backlit with daylight as well. (The shadow you see there is of the father about to enter the scene through the curtained door.)

We shot the first scene with the camera set to daylight balance. After a few takes, the director was satisfied, and told us to proceed with lighting the next setup.

What happened next was lightning-fast. We turned off the HMI PAR on the left hitting the wall, took off the CTB on the 2k behind the curtain, moved the fluorescents from the ceiling onto a c-stand, switched the camera’s white balance to tungsten, and voila! We had our night scene!

Finessing was done when the final camera angles were chosen. The HMI PAR coming through the right-side door was raised and tilted down for a more downward angle, and a couple of cookies were used to create the moonlight-through-the-trees effect. Some smoke was added (motivated by the charcoal cooking area) to create a different texture. Exposure was reduced as well.

The chance to do a really good quick change does not come up often, but one can always look for little opportunities to make efficient lighting changes using the same philosophy.

Think ahead. When shooting different scenes in the same general area, do not just think about current setup; also consider how you will light the next scene, and perhaps the scene after that. See if you can position your lights (particularly any huge scaffold-mounted HMIs that you’re using) so that there will be the least amount of time and effort needed to move to the next setup. With one pan of a head, your key light for the current setup might be able to serve as the backlight for the next, and so on.

Modify your sources. The danger in using the quick-change philosophy is that one scene might not be sufficiently different from the next, and every scene starts looking the same. You have to fight against this by modifying the light. Use different types and strengths of diffusion. Make your sources soft when they were previously hard. Create textured shadows using cookies and natural gobos like plants and trees. Use colored gels – different grades of CTO, CTB, straw, special colors– and change them for each scene. (Don’t go overboard though!)

Swing it around. In the same spirit of changing the look of the scene, move those light heads around a bit: pan them to the other side, tilt them up or down, bounce them off a wall or the floor. Look around for things you can use: if you’re shooting in a pool area, go ahead and bounce a large source into the pool to throw a nice shimmering reflection on a wall or ceiling.

Turn one off. It’s amazing what turning off one light can do to change the look of a scene.

Add a practical. There’s a story about a legendary cinematographer who had finished lighting a day interior scene when his director arrives on the set and says, “No, no, this is supposed to happen at night!” The DP walks over to this table lamp, turns it on, and says, “Now it is night.” And he was right – it did look like a night interior all of a sudden.

Contrast. A great way to differentiate the look of one scene from the next is to change the contrast of the scene. Reducing (or eliminating) fill light, or changing the highlights in the scene can help a lot. In the scenario above, the removal of the ‘sunlight’ hitting the back wall took away the ‘day’ feel very effectively.

White balance. The biggest change effected in the sample scenario above was when the DV camera’s white balance was changed from daylight to tungsten. This caused the daylight sources in the scene to turn blue. (In the film realm, this can be done by removing the 85 filter, when using tungsten-balanced film.) Then with color gels you can modify your sources to look like moonlight, street lights, indoor lamps, and so on. For this shoot, we decided to create moonlight using daylight sources with 1/2 CTO, shooting tungsten balance. This gives you a half-blue moonlight, which I feel is blue enough to give the feel of nighttime, without the glaring artificiality of full blue.

Quick-Change Three-Point Lighting. This is a term we coined to describe the use of four sources arranged in a diamond pattern so one can create several three-point lighting setups quickly in the same area. On the same shoot described above, we spent a whole afternoon in a parking lot where the kid characters were holding a “rally” in front of a supermarket. We needed to get different angles very quickly, so we placed large soft sources on the east and west sides of the parking lot (the supermarket was to the north) and placed two hard sources in the northeast and southwest corners of the lot.

Lighting then became a matter of balancing the light via scrims and diffusion. When shooting northwards, we would have the east soft source as our key, our west source as fill and the northeast hard source as the backlight on the whole crowd, with the southwest light shut off. Shooting southward, we’d just turn off the northeast hard source and fire up the southwest one and we were ready. For angles in between, we’d nudge our lights a little here and there, but essentially we were prepared for any angle within five minutes. The disadvantage to this style is that you will need one more large source than you normally would. However, the time savings can often be worth the extra expense, and your director will also appreciate the flexibility this kind of setup gives him.

Collaboration. Speaking of directors: we cinematographers are there to serve our director’s vision, and this sometimes means that our plans for smooth and efficient moves from one setup to the next may not be in sync with what the director wants for the scene.

It’s best, therefore, to keep your director in the loop about your quick-change plans: when you’re considering how to execute the next three lighting setups one after the other, run your plan by him so that he can tell you from the get-go whether or not the plan works for him. This will save you a lot of grief, and will keep your combined work looking top-notch.

Time is the enemy. It’s an old filmmaking adage that you can have it cheap, fast, and good – but only two of the three. By using these techniques, perhaps we can help improve the fast part of the equation, and thus leave some wiggle room for cheap and most importantly, good.

Paolo Dy is a director, cinematographer, and screenwriter based in Metro Manila, Philippines. He can be reached at www.paolody.com.