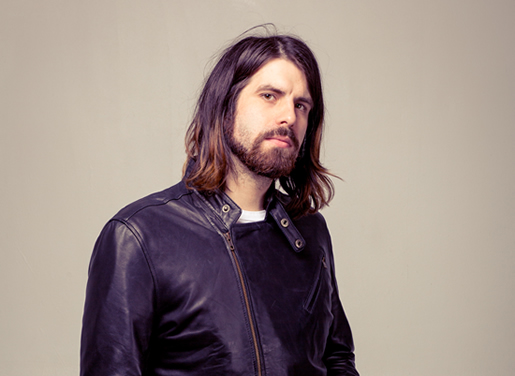 When did you begin using DSLRs, and what first inspired you to use DSLR cameras to shoot video?

Andrew Rodger: I’d been shooting stills with SLRs since my very first Olympus OM10 film camera. However, the opportunity came to work with a video-capable DSLR when stills photographer Chris Murray told me he was looking to buy one. I’d seen his work with the first 5D and had long admired the subtle colors he was able to reproduce and the crispness and quality of his images. So when I heard he would have one of the first MKII bodies in the country, I jumped at the chance to shoot with him and this groundbreaking new camera.

Before the MKII was announced I’d been been designing a rig, which used five 5D bodies crystal-synced firing stills into a pentaprism. But when I saw the footage from the MKII, I knew I could put, what would have been a beast of a rig to one side. The first video we tackled with it was the Evenflowerskill music promo. 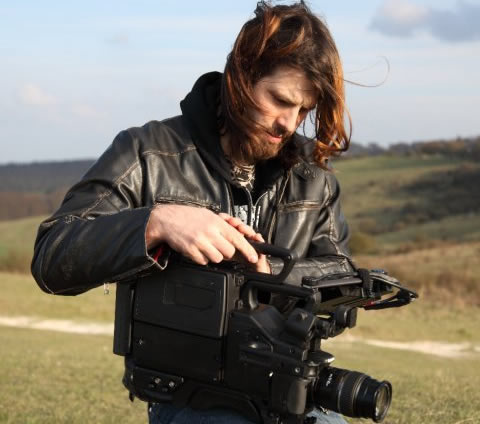 What is your favorite DSLR camera to work with on commercials and why?

Andrew Rodger: PL mount modified 7Ds are very popular here, but I’m still a fan of the 5D MKII. For me, it’s much cleaner and therefore usable at high ISOs. It has better color rendition, and the larger chip allows for that ultra-shallow depth of field ‘DSLR look’, all without the need to resort to very fast lenses.

What kinds of DSLR tools, technologies, and gear do you use for shooting commercials versus music promos?

Andrew Rodger: I tend to use a similar setup, for music videos although often it’s more appropriate to involve less kit. On a promo, the set can be a less formal environment and having lighter, untethered equipment makes it easier to push boundaries and try new things creatively.

I’ve got a great Sachtler 18p tripod which always does me proud. Most other support kits I rent. Commercials can mean the camera becomes a mess of cables and boxes as everyone wants a feed of the picture, so I tend to order in what I need for each job from one of the great kit houses over here like Feral Equipment.

Canon L glass is always a winner, although I went through a period of exclusively shooting on ‘90s era OM manual lenses with an EOS adapter glued to their backs. They’re softer (and a bit cheaper), but they have a lovely tone and are very kind to skin. Recently though, I’ve fallen in love with Rokinon primes for their image quality and robustness. I even use them on my RED.

If I’m going handheld, I never use the camera without some sort of rig. For me the most obvious sign of DSLR footage is the short, fast, shaky movement that comes with directly holding the camera without a shoulder brace. Part of the ‘look’ of larger cameras like the RED and certain film cameras is the ‘quality of movement’, which comes from their physical size and weight. Shaky footage is something an audience will identify with as amateurish, while the lengthier corrections and floats that come with a longer bodied camera are more acceptable in modern film. In short, adding a support frame to the camera helps the image to look more cinematic in handheld configuration, to my eye at least. I built mine from parts. It was lot cheaper this way, and I got exactly what I wanted.

If you don’t have a rig, a good trick is to use a lightweight tripod laid down on your shoulder. This steadies the camera and moves the camera’s fulcrum further from the image plane. Watch out behind you though! 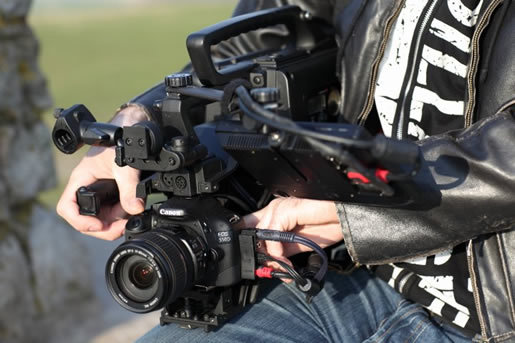 Andrew Rodger: I tend to have the camera rushes transcoded to 422 MOV, so they can be easily edited. Then, once they’re cut, I have them reformatted to the original camera files.

If you could share an interesting challenge that you have had in relation to DSLR cinematography and/or DSLR workflow, what would it be, and how did you resolve it?

Andrew Rodger: The first challenge we hit with the 5D MKII was one of framerate. I wanted to shoot the Evenflowerskill video on the brand new 5D, but as we were shooting the European broadcast, we needed to shoot at 25fps. However, when the camera first came out, it would only shoot at 30fps. We tried a few different pull-down techniques before we hit upon an interesting idea: to treat the shoot as if we were shooting film and slightly overcranking the camera. We did the math and sped up the music track by the correct percentage, and on set I had the band perform to the faster track (which took a little practice). Then, in post I reformatted the 30p footage in Cinema Tools, so that it would playback at the slower rate of 25fps.

It’s actually a really nice effect because it gives a very slight, barely noticeable slow motion effect to the footage, which I feel lends it an extra grace and power. We could have, of course, used the same technique to take it to 24fps.

I’ve since used this technique on other music promos to go from 50fps to 25 for a synced slo-mo effect.

If you could choose only one lens with any of your DSLRs, what would it be and why?

If you could share some inspiration or insight with working with DSLRs in the industry, what would you share with filmmakers and cinematographers around the world?

Andrew Rodger: DSLRs are a great tool for learning and improving cinematography. Having a camera, which is capable of incredible imagery for such a small price, is unprecedented. The best piece of advice ever given to me was from English DoP, Peter Edwards. He said, “If you’re shooting day after day, you’ll improve and learn new things. From there you’ll develop a style as well as a tool kit to get you out of bother on any set.” 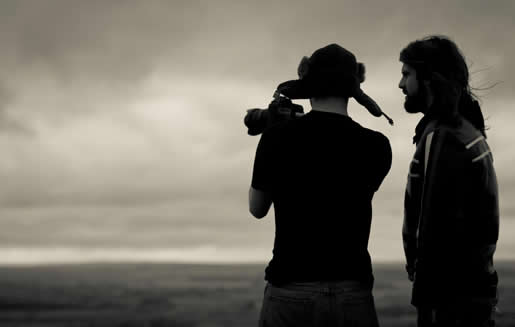