The post-­production is a highly important stage of filmmaking and I have the feeling that it is still  underestimated by  some  young  filmmakers. In my  opinion,  you  should  plan the  post-­production right from the beginning of your project and budget enough money for it. It is also necessary to set clear deadlines. I recommend to work with people that you know and whom you can trust.

In general, it is good to get the post-­production crew on board as early as possible. The editor, the composer, the sound mixer, the color grader etc. should know the project right from the beginning. Andy Serkis, who supported my MA research project, said that even VFX companies should be brought on board as early as possible. It is also good to put the post-­production crew in contact before they start to work on your project, so that they know what they need from each other (especially which file formats).

In this article, I want to share some experiences I’ve made during the post-­production of my MA graduation film “The Talent Agent”.

If you shoot your film in 4K, you have to deal with way bigger files in post-­production. Even on set you need a good and reliable DIT (digital imaging technician) since you have to change the CF cards more often and it takes longer to save the material on multiple hard drives. Since 4K files are normally too big to edit, you have to create compressed files (“proxies”) and edit with them. In the end of the post-­production, you exchange the proxies with the original files.

We edited my MA film at Met Production, a production company based at Ealing Studios – London (the oldest continuously working film studio in the world). I had a technician there who checked the files and then compressed them. Even we had some powerful computers at Met Production, it took a few days to create the proxies. So if you shoot in 4K, you need to calculate a bit more time for the setup of your post-­production.

I worked with a great editor from Latvia on my MA film. I gave her my storyboard, all the notes from the continuity person and I wrote down which takes I prefer. I think especially my storyboard was quite helpful for the editor, since I storyboard the shots in the order we see them in the film. Like my former professor Michael Haneke, I already try to edit the entire film inside my head in pre-­production.

However, it is good if the editor does the assembly cut alone, since he or she has a fresh look on the material. There is a danger that some directors want to keep shots, just because it was a lot of effort on set to get them. Even if the editor sticks close to your storyboard, he or she might have good ideas, especially for fast sequences. I remember that it was exciting, when my producer and I came in and watched the assembly cut for the first time.

In general, it is good to cut on movement and to make sure that each shot has a beginning and an end. Timing is very important to me and that the speed of the film changes at certain points. To create a smooth montage, you shouldn’t cut too similar shots together; e.g. you can cut from a close-­up to a medium shot of the same person, but you shouldn’t cut from a close-­up to a medium close-­up.

There is also a slight difference between editing German and English dialog. Due to the syntax, in German the most important words usually come at the end of the sentence. Therefore, you have to wait until the end of a line before you can cut to show the other person’s reaction. In English, the most important words normally come earlier, so you can cut quicker to the reaction.

I’m a big fan of slightly reframing the shots in post-­production. Therefore, you have to shoot everything a bit looser and then work with a letterbox (black bars) in post‐production. It is important to discuss the exact aspect ratio with your producer and your director of photography in pre-­production. On set, you need lines which mark the black bars on your monitor to compose the shots for the right format.

Three MA cinematography students worked on the color grade of my MA film. One did the basic grade, one worked on the details and one took care of the noise reduction (since the film mainly takes place at night). 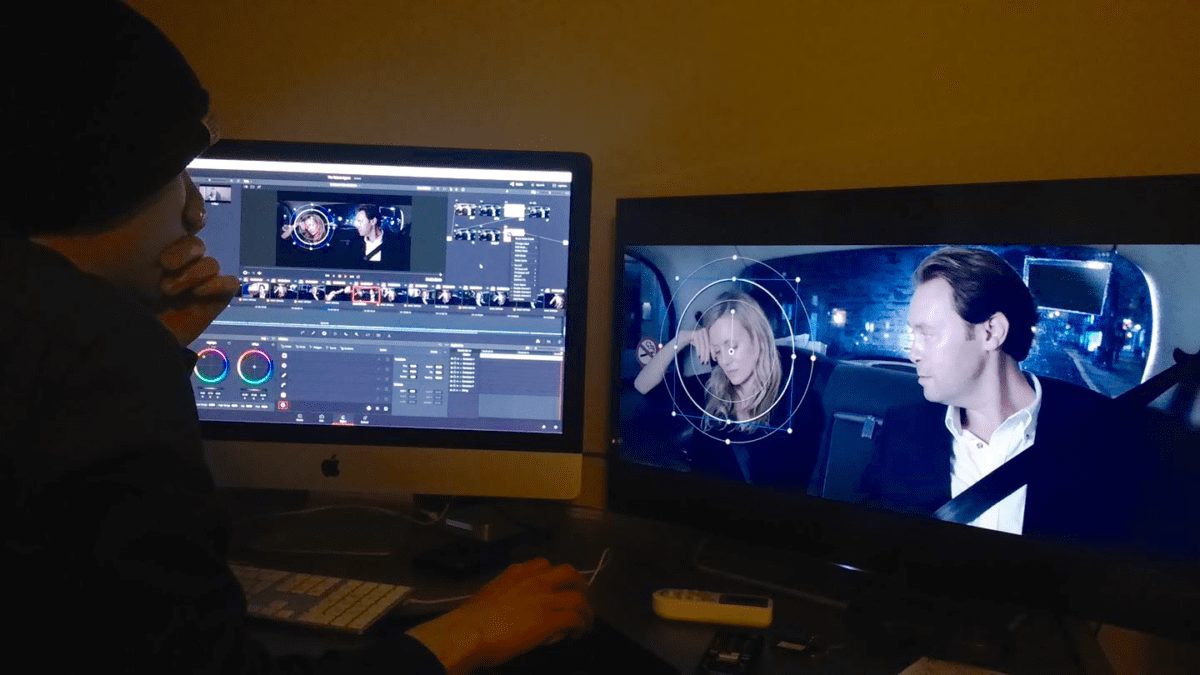 There are so many possibilities in color grading. Therefore, it is important to focus on the main things first, before you start to work on the details. In my opinion, you shouldn’t fight too much against the light, especially when you have to deal with limited capacities and time. Get the lighting right on set and decide in pre-­production if you want to light the scenes with warm or cold light.

For the trailer, you can grade a bit bolder. It is also good to slightly adjust the grade of all shots in the trailer, so that they really fit together. You can also push one color to create an atmosphere quickly. For the trailer of my MA film, we pushed the color blue to create the feeling of a cold and economic world.

I worked with a great young composer from Vienna on this project, who has worked for me before. First, I have sent him my temp tracks. Temp tracks are good for the composer to see which style of music you want for the film. The composer should get inspired by the temp tracks, but he or she shouldn’t copy them. For my MA film, I wanted some electro music which sounds like a thriller and creates a universal feeling.

If you and your composer live in different places, it is good to meet when you mix the instruments. In case you use some pre-­existing music, it might be expensive and you have to make sure that it fits to the dimension of your film.

My composer is also very good for trailer music. The music for trailers is a bit different than the scores for films, since it needs to be even catchier and it has to be on point much faster. The trailer music can also refer to the main theme of the film score.

I worked with a young sound mixer from Goldcrest on my MA film. Goldcrest is one of the biggest post-­production companies in the UK. We mixed my MA film in a large sound studio in central London. Normally, films like “James Bond” and “Murder on the Orient Express” are mixed there.

The sound mixer and I really went into details and it is amazing how much you can tell with sound. You can create and expand spaces and guide the audience’s attention with good sound design.

If you mix your film in such a big sound studio, you have to keep in mind that most likely you won’t ever hear it in that quality again. Therefore, you should be careful not to mix things too quietly. The sound mixer also made a mix of my MA film for TV. For TV as well as for mobile devices, you have to mix all sounds on a more similar level. 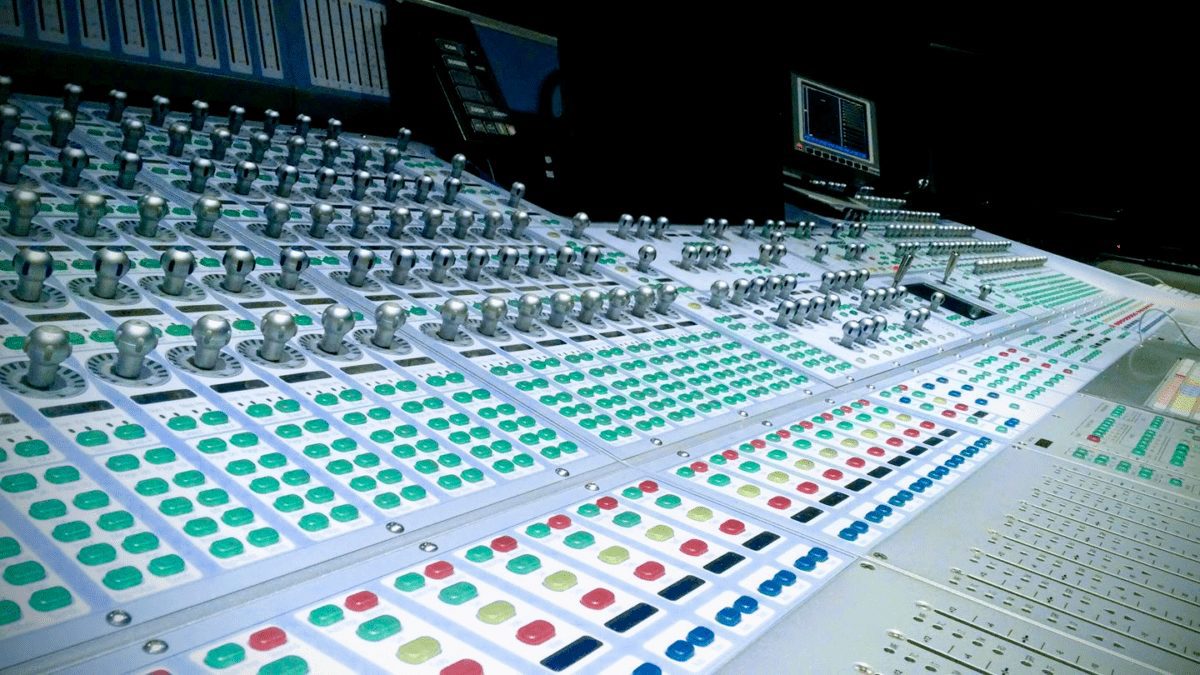 I worked with a young designer on this project. She created the poster and helped me with the promotion for the film. In general, it is good to keep the same colors and font for all promotion pictures and clips, so that they are recognizable and have a common look.

In my opinion, the poster should give you an idea for the tone of the film and the genre. If you can get a well-­known actor/actress for your project, the poster should feature him or her. For my MA film, we decided to focus on the two leading actors (Christian McKay and Stephanie Vogt). We also wanted the promotion material to represent the cold atmosphere of the film, since it is about the dark side of show business.

You can also put a question on the poster to give some hints about the story or the theme of your film. On the poster of my MA film, we’ve put the question: “How far would you go for success?”

At the end of my MA program, all our graduation films where screened at the VUE Cinema – Leicester Square, London. It was great to see our films at a big West End cinema and I was happy that my film was chosen as the opening film.

If you introduce your film at a cinema, it is good to give some hints about the topic and what interested you about it. In my opinion, you shouldn’t tell too much about the story, so that the audience isn’t ahead of the game.

Next, my film became part of the Short Film Corner at the Festival de Cannes. It was great to be part of such a big festival and to meet many people from all around the world there. For me, every day in Cannes felt like three days. You attend lots of screenings, you join workshops and masterclasses and you go to parties in the evening.

At large festivals, it is useful to have flyers to promote your film. It is also good to know what you want to learn more about. I wanted to learn more about funding and distribution in Cannes, so I’ve talked to many representatives from different countries and to sales agents at the festival market.

I think it is important to plan the  post-­production right from  the beginning and to get the people for it involved as early as possible. It is necessary to set clear deadlines and to budget enough money for it. I like to have a precise plan, but I try to stay open to new ideas at the same time. I hope my article was helpful to you. Enjoy this phase where all elements of your film finally come together! 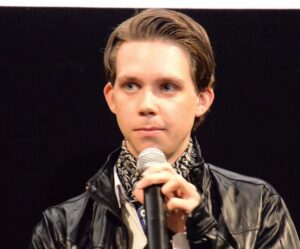 Marco Schleicher is an Austrian filmmaker and a former student from Michael Haneke. In London, he completed his MA in Directing. Besides writing and directing his own projects, Marco works in the Assistant Director and Casting department. He worked on Blockbuster movies -­ including “Terminator” and “Hellboy” -­ as well as on TV series for Netflix and Amazon. Further information can be found on his website:
www.marco-schleicher.at.