Peter Warren, CSC on Getting His Start

I have had my eye through a viewfinder professionally for almost 40 years. At 62, I am still as busy as ever. My wife recently retired, and she asked me when I’m going to retire, and I said, “I guess when the phone stops ringing.”

I am a freelance Videographer or Cinematographer. I’m still a little confused about these two terms and what the differences are. My main camera of choice these days is the Canon 5D Mark IV (although I am waiting for the Sony A7S III to be available and will likely switch). I have used a wide range of cameras from Betacams to the ARRI Alexa Mini, but I love the full frame DSLR’s. The size lets me get it in places larger cameras can’t go, the shallow depth of field, time lapse, slow motion and the ability to throw it on a Ronin all make it the best camera for me. I am also taking stills on almost every shoot to the delight of the client. I work with a very small crew, usually just a sound person and more often than not, just myself. I do corporate videos, docs, news, small corporate dramas, low budget commercials. I have DP’d several lifestyle series and been a camera operator on even more. I do not do feature films, not my thing.

My journey started as a news cameraman in 1983 at CITY TV. I had graduated from Ryerson’s Radio and Television program. With no contacts or relatives in the biz, I wrangled up my courage and phoned CITY TV to offer my services as a volunteer. Back then, you could do that.

I told them there was no other place I wanted to work. After an interview, they offered me a volunteer position in the promotions department. I spent a long summer editing promos, and then, finally, a news camera job came up. This was my opportunity!

Getting a job in a major market with no experience would be a long shot. I did have a demo tape from stuff I had shot at Ryerson. I knew how to operate the camera, but certainly other, more experienced shooters would be applying for the job, and they did, but my volunteering paid off.

I got an interview for the job. Then I went for a field test, which was shooting an actual story for that night’s newscast. The next day, I was offered the job!

When I expressed my appreciation that they would hire me with no practical experience, the senior cameraman told me something I’ll never forget: “We can train a monkey to do this job.” …’Uh, what?’ I thought… But he went on to say, “We are looking for the right person, motivated, eager, willing to learn and who works well with others.”

This has always resonated with me, and I can’t express enough how important it is. It’s one thing to understand all the technical stuff with cinematography / videography, composition, focal length, colour temperature, movement, depth of field, and on and on, but when it gets down to it, people will hire you because you show up with the right attitude and eagerness with excitement for the project and respect for others. Most importantly, it should be fun, which relaxes talent, the crew, the client and makes the day go a whole lot faster.  My goal is always to give the client more than what they expected both in the experience and the product.

And, by the way, good cinematography takes a lot of effort. It’s pulling out that one more light, getting that extra angle, shooting just a bit more B-roll. Listening to an interview and knowing what shots to look for. I have been told by producers that the editor is always happy to work with my stuff because I give them lots to play with. I constantly think of the editor when I’m shooting: Do I have establishing shots, enough cutaways, and continuity in the sequences? Are there transition shots? They can always leave stuff on the editing room floor.

Also be creative, think of the best possible shot considering foreground and background, interesting angles, reflections and shadows. Lighting does matter. Occasionally, the existing light is in the right place and at the right angle, but this is the exception not the rule. If you make the extra effort to make it look good, it will not go unnoticed.

I have had so much fun over the years. I have travelled all over the world on someone else’s dime and have seen and experienced things that only a few people get to do. I have had such a blast and cannot think of a better career.

But, I gotta go… The phone’s ringing. 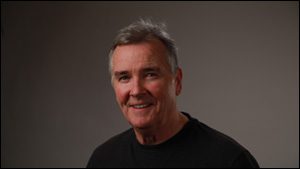 After graduating from the Radio and Television program at Ryerson Polytechnic University,  Peter Warren, CSC, began his career in television news working at CITY TV in Toronto as a Citypulse news cameraman. He was proud to be one of Canada’s first video journalists, telling stories from behind the camera. Moving on to Global TV, Peter was able to do more national stories where he won several awards including a Gemini award for Best News Photography. CTV Ottawa offered Peter a senior news cameraman position which gave him the opportunity to come back home.  After seven years and several more awards, Peter went freelance which opened up a whole new world of production. Since then, he has been the Director of Photography on 6 Canadian television series and worked on many others as camera operator. Peter is also very busy with corporate videos, news and commercials. He has also had the opportunity to give workshops on videography and lighting across Canada, as well as Australia. His resume with complete production credits is available on his website.
www.peterwarrendop.ca

“Should I Go to Film School, or Get a Job?

Here’s what 3 award-winning filmmakers share about that topic… Pictured above: Photo taken in Saskatchewan, Regina, Canada, by RoyalZProduction on

Camera tips and tricks, and inspiration, from master cinematographers Daryn Okada, ASC and Patrick Cady, ASC, and more… Pictured above: