“Love the Look: And Leave Your Spot Meter at Home” by Thomas Ackerman, ASC 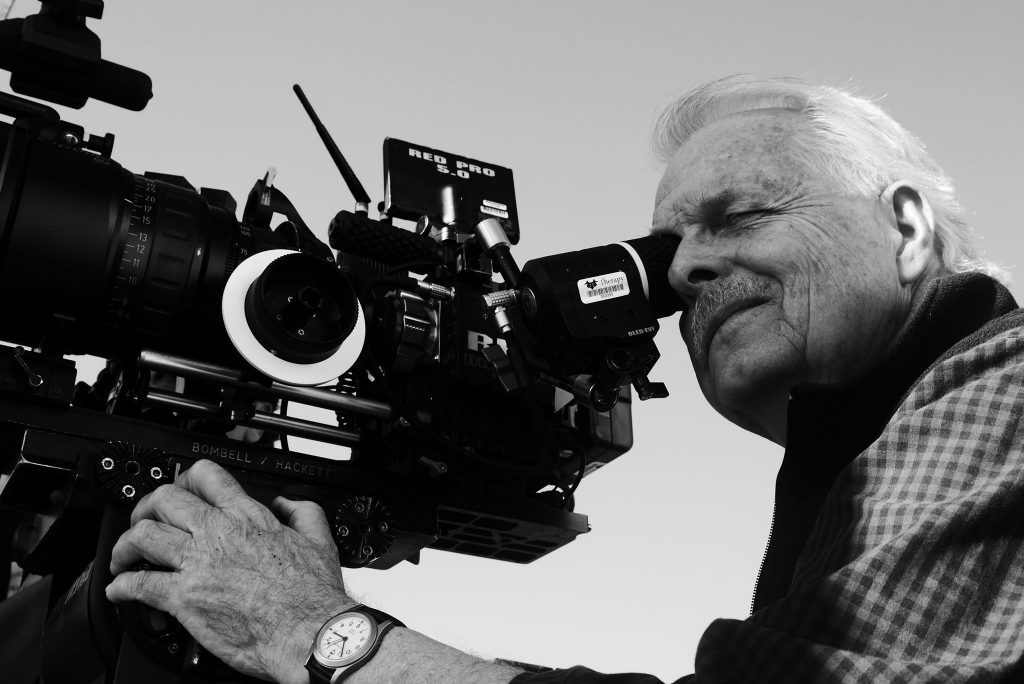 I received an e-mail query from a University of Colorado cinema student approaching his first interior shoot with 16mm Kodak Vision 500T raw stock. His central question was how to expose the film using studio lighting, in this case a kit limited to three open faced quartz lights. Although he had prior experience as a still photographer, and had accomplished 16mm exteriors as part of his class work at Boulder, the prospect of shooting film inside was a matter of some concern.

This earnest note, from an enthusiastic but uncertain young cameraman, caused me to reflect on how the subject of exposure is almost impossible to consider on its own, since it is only one part of the process that renders a photographic image. There are so many other crucial choices to be made, not the least of which govern the use of light. Obviously composition plays an enormous role as well.

One can sympathize with a generation of digital filmmakers approaching their first encounter with motion picture film. The contrast in equipment is in itself shocking. From a camera that has a menu more sophisticated than a Trident nuclear sub, including a vast array of automatic features, they must transition to a rather straightforward piece of machinery that is little changed in a hundred years of extremely gradual evolution. Festooned as it might be with circuit boards, video monitors, smart lenses, and every conceivable asset to the craft of focus pulling, within the motion picture camera are fundamentally the same works that have transported emulsion through the gate for more than a century. For those accustomed to the user-friendly world of a Mini-DV camcorder, the change is sobering. The film camera basically sits there waiting for you to do something.

It would be a mistake to underestimate the challenge of shooting film for the first time. Years ago in Paris, we attended a New York Film Academy event to witness the culmination of their summer session at La Fémis. Much to NYFA’s credit, their program is mostly film-based. Students are provided 16mm cameras, a few hundred feet of black and white stock, and find themselves instantly challenged to make an image instead of merely pointing a lens at a target. The results at the screening we attended were decidedly uneven. Focus and exposure in many cases were wildly off base. The shots themselves seemed to suffer an odd disconnect, as if visual talents that had flourished in the world of easy shooting, with elegant little cameras and endless amounts of tape that cost virtually nothing, were now foundering, thrown off by the clunky Arri S and its 3-lens turret.

Yet there was beauty in much of the work, a forced simplicity reminiscent of the Nouvelle Vague. Maybe it was the stark black and white, or the seduction of Paris as a movie set, but these short films recalled the 1960’s when European shooting was accomplished with far tighter budgets compared with today. There is a wonderful image of Truffaut during the production of Day for Night, in which he is poking up through the tiny sun roof of a Citroen 2CV, body crunched against his tripod-mounted camera, making a traveling shot from a vehicle that looked like it should be dispensing clowns at a circus. (Hollywood requires the same shot to be made with a specialized vehicle costing a couple of hundred thousand dollars.) In the end, however, any photographic shortcomings of the NYFA films did nothing to undermine their heart and soul.

This brings us back to whether the “correct” exposure of film is a question that can be properly asked, or if, in the words of my late friend and great mentor, Charles Guggenheim, it is a “question that shouldn’t be dignified with an answer.” The truth is that nowadays photographers must pursue their craft with any number of irritating distractions. After all they are citizens of the Digital Age, in the course of which cinematography reinvents itself on a daily basis. At one time, say twenty-five years ago, a Director of Photography might choose from the instruments housed physically in a given studio’s lighting department. Today he or she has access to an inventory of withering size, variety, and sophistication. Although most cinematographers have their own favorites, and generally rejoice in the fabulous shopping list occasioned by the production of a major motion picture, it is safe to conclude that more is less. Certainly for a student trying to whip up their courage ASCto light a set for the first time, the glut of options may prove unwelcome if not self-destructive.

In a film school setting, obsession over one part of the puzzle, exposure methods for example, can overshadow many other important parts of the process. Chief among them is intent, the values of a shot as conveyed by the lighting. To run around with a light meter, bean-counting foot candles before things look great, is no way to create an image. To me, the essence of photography is knowing what you like even if you don’t at first know exactly how to get there. Whether using natural light or a sound stage full of gear, it all rests on what you want to see in front of you. It boils down to shaping light, shadow, color and texture until the results are delightful. Only then can the decisions be made on how to expose the film (or the chip). Wondering how strong the backlight should be is not answered by measuring, but by looking – how deep the shadows, and lack of fill light – by what your eye tells you. An affinity for risk-taking helps, although the latitude of most current film stocks provides insurance against all but the most egregious newbie mistakes.

In the best of worlds the director and cinematographer will share the same approach to things. In any event, it is the cameraman’s sacred obligation to serve the director and the story. To the extent that a Director of Photography exudes confidence, to the degree that she shows leadership and exquisite taste, the visual goals of the movie will be achieved. The gold standard is a photographer who loves the image he has been hired to put on the screen. Not to minimize the importance of mastering one’s craft, a lesson which if not learned in school will be brutally taught the first day on the job, but all the dithering with a light meter will not answer a single important question about photography. Worse, it offers an all-too-convenient refuge from the real task at hand, that of pulling together the elements of a great picture.

The cornerstones of a cinematographer’s method are observation and recall. Paintings, sculpture, movies seen at a tender age make their indelible impression, just as yesterday’s sun dapple in the back yard. Recently I mentored a Brooks Institute project and explored with the student DP the sorts of things that fed his process. Both of us found common ground in the observation of everyday life: the look of Starbuck’s on a late afternoon, the way a girl’s lovely face might be nuanced by a stray headlight beam, or by the glow of a cheesy neon sign. If one were to be impossibly esoteric, music could be included on the list of photographic influences. The trick in shooting a movie, in part, is to find the way back to these little glimpses of accidental art.

Finally it is the photographer’s eye that sets the only true course. In order to put that vision on film on a reliable, daily basis, certain things must become routine if not subliminal. And the sooner the better. First light the set, then read the meter to your heart’s content.

Thomas Ackerman, ASC shot for multi-Oscar-winning documentarian Charles Guggenheim 1970-1973 and served as Director of Photography for “Beetlejuice” (1988), “Christmas Vacation” (1989), “Jumanji” (1996), “Anchorman: The Legend of Ron Burgundy” (2004). He received a CINE Golden Eagle for “The Oceans: Source of Life” (1978, United States Information Agency, Writer/Director/Cinematographer), and CINE Golden Eagle for “The Computer: A Universal Tool” (1979, United States Information Agency, Writer/Director/Cinematographer). With a filmography of over 30 titles, Mr. Ackerman’s work in the industry includes over 50 years of motion picture creation.