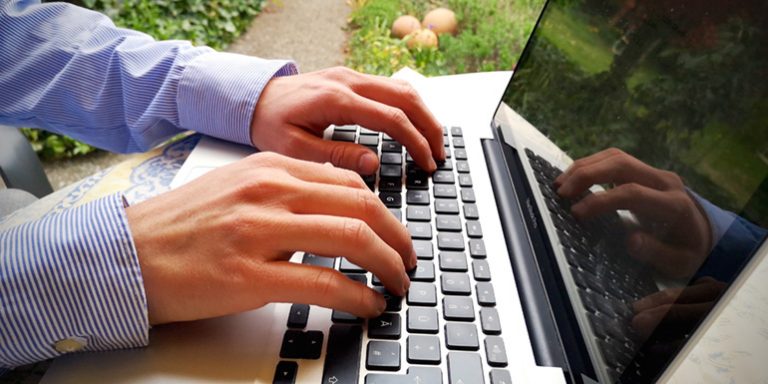 How to Develop a Story

How to Develop a Story

My Approach to Scriptwriting

In this article, I will describe my approach to scriptwriting. Before I actually start writing, I take a lot of time to develop my ideas and to work on the structure of the script. This helps me to create a solid base for the writing process.

I have a 7-step method on how I develop a story. I start with finding ideas (Step1), then I turn them into a basic plot (Step 2). Next, I add acts and plot points (Step 3) to get the structure of the script right. After a deeper research (Step 4), I write a scene concept (Step 5), which I then extend into more detail (Step 6). After all this work, I actually start writing the script (Step 7).

In the following article, I will describe each step of this process carefully. This 7-step method helps me to be more precise when I’m writing. It also helps to get the rhythm and the inner logic of a script right. If you work with a clear method, it might even give you better time management and lesser writing blocks.

I have a contract as a scriptwriter with an Austrian production company. I have recently written 6 episodes for a TV series for them. I have also used the following method to write my MA graduation film, “The Talent Agent,” which was featured at the Short Film Corner at the Festival de Cannes.

Step 1: Finding Ideas
The first step is probably the most important one. At this stage, you decide what to make your movie about. It can be something you experienced yourself, a book you like, a theme that you’re really interested in, a historic figure, or a real event, etc. I think it is important that your topic is relevant and new and that you have something to say about it. Finding ideas is the first research you do for your project and it can be quite tricky for many people. I’m always very happy if I find a strong idea for a movie.

Normally, I start with a theme. For my MA graduation film, “The Talent Agent,” I wanted to tell something about the dark side of show business. One evening, I watched a TV report about how much money dead celebrities still earn and how their sales go up when they die. This led me to the idea for the main conflict. A talent agent, who is in financial troubles, tries to push his star into suicide to commercialize the star’s death.

Step 2: Basic Plot
At this step, I put all the aspects around the main conflict in the right order. I write down the key moments to create the basic plot. It looks like this:

Step 3: Acts & Plot Points
Next, I add the acts and plot points to my basic plot. This step is very important to get the structure and rhythm of a script right. If you are interested in screenwriting theory, I can highly recommend that you read Syd Field’s books.

According to Syd Field, the story of a film is divided into 3 Acts: Setup, Confrontation and Resolution. Normally you place Plot Point 1 (a moment where the story is turning) at Page 25; the Midpoint (a highlight) right in the middle of your film; and Plot Point 2 at page 85. If you are writing a short film, you can adapt the acts and plot points to the length of your movie. In the case of my MA graduation film, it looks like this:

Step 4: Research
When I know the basic story, I start to do some deeper research. In my opinion, it is important to know what aspects you want to focus on. If your research gets too broad, there is a danger that you try to put too many elements and details into your script.

For deeper research, I read books and articles about my topic. I also watch documentaries and other movies about it. I also like to visit possible locations for the film. Furthermore, it is inspiring to talk to people who know more about it and to attend university lectures about the topic.

Step 5: Scene Concept
After the research, I split up my basic plot into scenes and write down the main things which happen. At this point, I try to connect my key moments with each other to find a red line through the story. The scene concept for my MA graduation film looks like this: 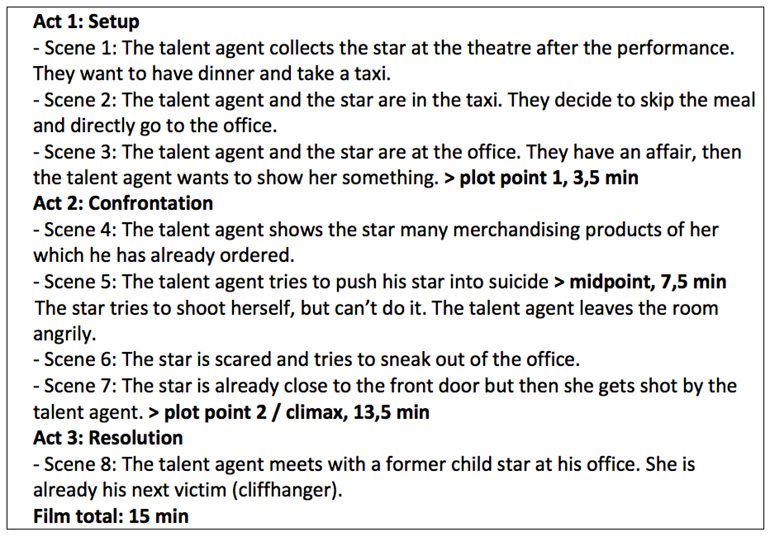 Step 6: Detailed Scene Concept
Next, I extend the scene concept into more detail and start to prepare the scenes. I write down how each scene starts and ends, what happens and how long the scenes are. I also write down what the characters say as indirect speech.

I think it is important to have a good mixture between long and short scenes, dialog-heavy and visual ones, as well as fast and slow scenes. I also count the length of all scenes together to make sure that the plot points are in the right places.

This step is time consuming but essential for me; and I prepare about 5 pages of the script per day. At this point, I also decide how to name my characters. I called the talent agent Jeff and the star Amber. Here is one scene from my detailed scene concept: 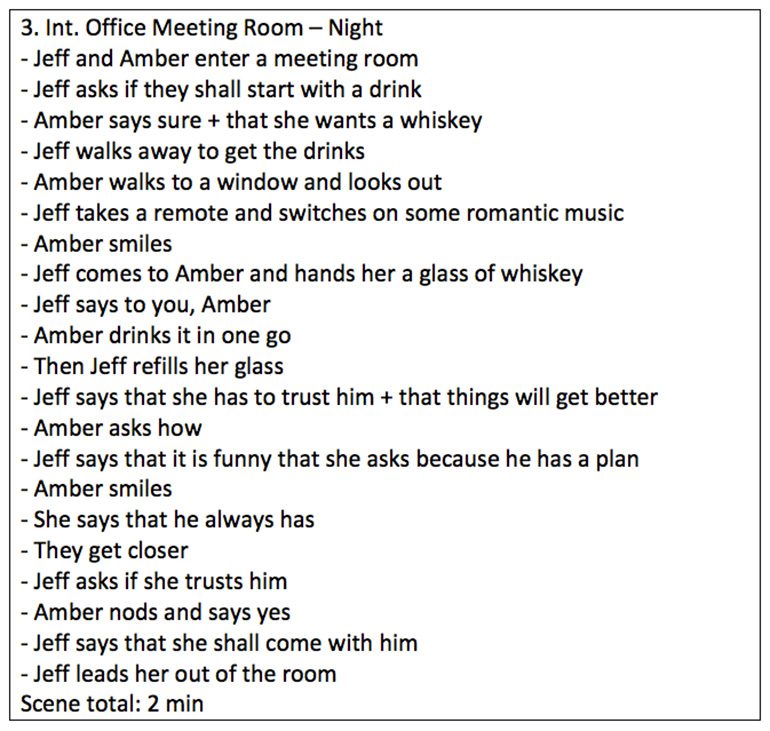 Step 7: Writing the Script
When I’m done with Step 6, I start with the actual writing process. I find it very helpful to have specific actors and locations in mind when I write. It takes me about 45 minutes per page; and I write about 4 to 5 pages a day (due to formatting, this equals 4 to 5 minutes of the final film). After that, my creative batteries need to recharge until the next day.

Writing at Ealing Studios (a film studio in West London)

Here a few tips for the writing process. For most genres, it’s good to start with a fast and spectacular opening sequence to grab the audience’s attention. Exposition scenes, where the characters have to explain something about their backstories, feel more dynamic if you add movement; like the characters walking or driving somewhere. Around Page 40, it’s good to have a scene where a character summarizes what happened so far, so that the audience doesn’t lose track.

During the writing process, I try to think from different perspectives: from the perspective of the characters, the target audience, my own as a filmmaker, the producer, the TV station/investors and the actors. If your project has a small budget, it might be even more important to write complex characters and emotionally challenging scenes to attract experienced actors.

I try to make sure that my directions don’t get too long. In my opinion, you don’t have to write every detail into your script. It’s important that your script is fast and easy to read since producers, as well as people from TV stations and funding agencies, have many scripts to consider.

When I’m writing dialog, I think from the perspective of the characters. It can also be helpful to think how you would say it in this situation, but keep in mind that every character has a different way of talking. I don’t like if dialog sounds like the subtext, since normally there is a difference between what a character is thinking and saying. I also try that my characters don’t say the obvious and that the dialogue doesn’t sound melodramatic.

Since I’m a young filmmaker, I think a lot about the dimension of my projects, and I try to write producer-friendly. You can lower the costs if you reduce the number of locations and supporting characters. This is also a chance that your script gets even more compelling.

I hope my article was interesting to you and that my 7-Step Method will be helpful to develop your story.

Marco Schleicher is an Austrian filmmaker and a former student from Michael Haneke. In London, he completed his MA in Directing. Besides writing and directing his own projects, Marco works in the Assistant Director and Casting department. He worked on Blockbuster movies -­‐ including “Terminator” and “Hellboy” -­‐ as well as on TV series for Netflix and Amazon. Further information can be found on his website:
www.marco-schleicher.at.