Hi. My friends and I want to make a short horror movie. A lot of the scenes will be shot in the dark with the only lighting being the moon. I tried to take a big white screen to reflect some of the light from to moon back to my actors, but it didn't work so well. I want to achieve smooth lighting in these scenes and have no vibrant colours. Does anybody have an idea of how to do this cheap and effectively with no editing/post-production?

Staff member
Hey there! There are many ways to play with lightning, from digital effects to camera settings. Usually playing with the shutter helps. What camera do you have?
D

Maura B. said:
Hey there! There are many ways to play with lightning, from digital effects to camera settings. Usually playing with the shutter helps. What camera do you have?
Click to expand...

Staff member
I know it However, at today's technology, probably your phone can film a better quality than your camera

Staff member
Reading your question I got a lovely NYC flashback when we at StudentFilmmakers hosted a workshop with Peter Stein, ASC. He was the director of photography for the horror film classic, Friday the 13th, Part 2, the second largest grossing film in 1981 for Paramount. He covered SO MANY THINGS.

In reply to your post above, you mentioned lighting actors, how to do this cheap, and with no editing/post-production. The first thing that pops in my mind, coming from that lighting workshop we did with Peter...

Peter gave an example referencing a scene from Jurassic Park where the characters in the story are walking by foot in the dark at nighttime and, of course, any characters walking in the dark at nighttime would most likely be holding some kind of light to light their path in the dark, so they can see where they're going. (Nobody sane would walk in pitch black outside at night, right?) So, Peter, referenced scenes in Jurassic Park, for example, where the characters were holding and lighting their paths with handheld flashlights. Peter pointed out that the actors' flashlights can also be used to light their faces.

Staff member
Happy Friday! I just posted this "Student Voice" article written by NYIT student Emily Peacock, "The Making of the Film, Out in the Woods." The production still kind of reminded me of your post here because you mentioned filming outside in the dark: 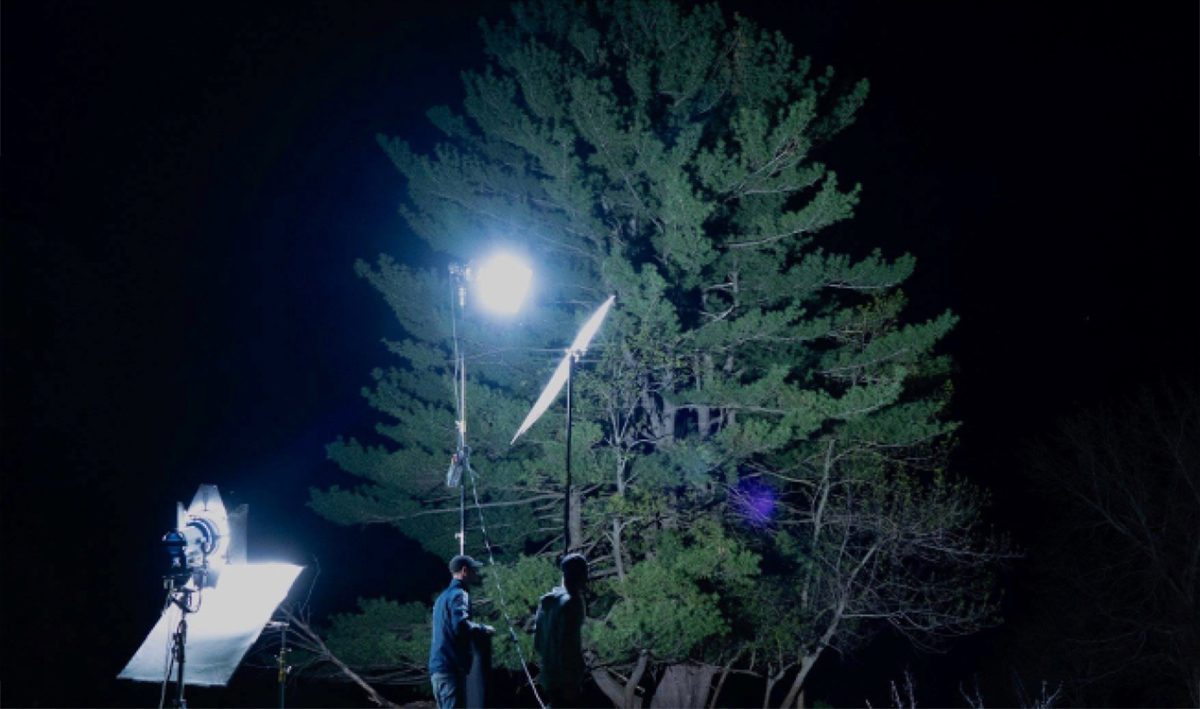 The Making of the Film, "Out in the Woods"

“Out In The Woods” is an independent short film that is a fantasy/horror genre made in 2018, by French filmmaker Simon Doutreleau...

Staff member
What are the attributes of moonlight?
What are the attributes of darkness?
Moonlight seldom has any direction for the source (the moon) is far away. It is not a light source. It’s a bounce from the original source, the sun. Often the eye does not perceive color in the darkness because the receptors can not interpolate color at low light levels thus our brain suggests color. If there is a full moon our eyes can respond to that color, which is a bounce of the sun (blue light/daylight).
Thus I believe that moonlight is soft/flat and cool almost without color. The only reason we can see in the dark is because our eyes become adjusted to the low light levels.
in horror films most people don’t carry a flashlight nor do they turn on the lights. It would negate the drama/fear in the story-telling. A flashlight would allow you to see in the darkness but you’d still not see in the shadows. All of the drama is in the shadows.
Here’s a simple solution to creating darkness/moonlight. Light always looks better as a backlight. Take as large as you can handle a white card, sheet, bounce material as high as you can control it. You can use the top of a building, high roller stands, scissor lift, condor or construction. Paint the stands or structure black so that it can be in the frame.
point a light into the bounce material to create a soft glowing backlight over your entire scene. If you are indoors you can use the ceiling or anything that will create an indirect light.
We’ve suggested that darkness is a low light level source. It’s important to know what your cameras threshold for exposure is before the image becomes grainy. We can suggest that is base exposure. Thus any light value above that will create base exposure for your scene. The higher the light level the more you separate light values which creates shadows and highlight. If you use the lowest threshold for darkness your shadows will be in the noise level of the camera thus it’s best to elevate the light value intensity up a stop or more giving the shadows a place to work without noise.
After you’ve created an overall base exposure it’s up to you to create subtle light in your character’s faces or a flashlight. It’s common to use too bright a flashlight. All light sources must be controlled in order to be properly rendered by your cameras sensor.
Thus moonlight is very soft and cold. I use tungsten or 3200 degree kelvin source with Rosco 117 (blue green) gel. The blue and green cancel each other out making the moonlight slightly blue of almost black and white.
The key to this exercise is understanding the ability of your cameras sensor and pre-visualizing what you want the scene to look like. Light and shadow or characters in your story and must suggest what is in the scene’s intent.
You must log in or register to reply here.