A Conversation with Patrick Cady, ASC


StudentFilmmakers Magazine: Can you talk about your experience as a cinematographer who has occasionally transitioned to the director’s chair?

Patrick Cady, ASC: I’ve been a cinematographer for 20 years now. I was an electrician and Gaffer, and before that I learned filmmaking at Ithaca College. It was a very hands-on school, we learned on film, there was a lab at the school, we learned all the technical things, light meters, cutting on film, we basically studied films and made films. So, I thought knowing all the mechanics was being a director. It wasn’t until I got to see John Sayles and Roger Deakins ASC, BSC working together on Passion Fish that I started to think that maybe all the stuff I was interested in, of to do the lighting, framing, exposure… that visual part of the storytelling, was Cinematography. Then I went to NYU’s Tisch school and met other students that had run theater companies, and realized they were directors.

Several years ago, I got to direct an episode of Rectify (season 4, episode 1) and I concentrated on performances and working with the actors. Rectify was a very good opportunity to approach that because it was a performance driven show. If the scene got better as we went into it, and it changed the blocking, we would go back and reshoot the master. Not that we had to do that very often, but every now and then, that would happen. The show was that committed to the performance.

Transitioning from DP to director, the biggest help in the 20 years of being a Cinematographer has been getting to work with amazing directors. From Karyn Kusama and Bethany Rooney (who wrote “Directors Tell the Story,” with Mary Lou Belli) to fellow DP turned Director Ernest Dickerson, I’ve shot for great people. They just epitomize the prepared, calm director, that person who makes the whole crew get really happy when they show up. And when you’ve gotten to work with directors like that, you start stealing little lessons from them just by watching the way they do things. And that’s really, really helped when I’ve had the chance to direct.

It’s been very exciting getting to do more directing lately because it’s going back to who I thought I wanted to be when I was an undergrad student. And it’s exciting how many things (and technologies) have changed, and how many things have stayed the same. It comes down to doing your prep. That (I call it homework) makes you comfortable with the story you’re telling and now communicating everything is easier. You can let people contribute and create the environment where everyone’s making the movie together.

I got to see that at work, really early, with John Sayles. His book called, “Thinking in Pictures,” was required reading at Ithaca. It’s about making a movie called Matewan. The approach that he illustrates through that book, and just in the way that he writes that book, you get the sense that, oh, a film crew can be filled with very nice people who really know their jobs very well and collaborate with each other. And then I got to work with John, and to see him practice what he preached. That was just the way his sets felt. And then getting to shoot “Girlfight” for Karyn Kusama, and see her bring the same approach to her set and just to, early on, be lucky enough to know that a film set can be a collaboration where everyone wants to go to work every day, and everyone feels welcome, and everyone feels safe. I’ve been very lucky to have that my whole career, and I think it’s really important for us to continue fostering that exact approach. You need to know your job. You need to know what you’re doing. But you also need to know you’re working with a bunch of other people with valuable opinions, and someone’s gonna have the right idea for a certain problem, and you’ve gotta be ready to hear it and welcome it.

StudentFilmmakers Magazine: Can you talk about your Primetime Emmy nomination [for Outstanding Cinematography for a Single-Camera Series (Half-Hour)] and your work on the episode “Hella LA” for the show, “Insecure”?

Patrick Cady, ASC: The nomination was a really big surprise and an honor. I had gotten on to the show, “Insecure”, just because in season two they had realized that they needed two cinematographers to alternate because they had so much location work. Ava Berkofsky was already in the middle of shooting Episode 3 of that season, and we alternated from then on, which meant I only shot three episodes. I came into the show and the look was already established by Ava. So, when I got nominated I realized it was just the luck of the draw of getting a really cool episode and the show being a great show.

StudentFilmmakers Magazine: Can you tell us about your role as producer for the documentary “Triviatown”?

Patrick Cady, ASC: “Triviatown” is a documentary about the world’s largest trivia contest. It just happens to take place in my wife’s hometown. I was fascinated with it, and I kept saying, oh, I should make a movie about this, and at one time, she said, “well, you should stop saying that and just do it”… which she has never said to me again because it took years to put together. So, I was putting it together, and I was going to be the director, and then, I realized I needed a co-director, and the perfect person to do that was my longtime friend, Brit McAdams. His first directing gig at VH1 was my first shooting gig at VH1, and we’ve been friends ever since. So, I coerced him to co-direct it with me. And we took a group of eight camera people and three sound people and a bunch of Mini-DV cameras, and we went and recorded the entire contest which was 54 hours long and generated almost 400 hours of footage, and then, spent the next two years cutting it down into a movie. It was really incredible and fun. We kind of screwed up the release by going with a smaller releasing company in the hopes of getting our money back to a couple people that had invested a few thousand dollars apiece, and we wanted to get them the money back. We had an option to go to another place, but we felt that they might claim to never making a profit, so we would never see any money for our investors. So, we should have just done that and gotten the movie seen. It would be nice if it can have a second life on a streaming site. I think it could have another life online.

StudentFilmmakers Magazine: Could you share with us your Top 3 Tips related to Camerawork?

Patrick Cady, ASC: Yes. The number one practical tip, and I have had hats made to say this ever since I was the cinematographer on the first season of “Cold Case”, and that is to Block, Light, Shoot – in that order. It’s always gonna seem at some moment like “we know the actors are gonna come in, and they’re gonna be sitting here, and they’re gonna walk from over there to over here”. You think you can start lighting before they get out of their wardrobe change or whatever. You’re gonna think you’re getting ahead by lighting before you see it on its feet, and sometimes you’re gonna get away with that, and other times it’s gonna cost you a lot of extra time. In general, it’s always faster to block it, then light it, then shoot it. It’s my number one thing I teach and tell students to remember. We all get into those spots, we feel that we’re getting behind and you can get a little jump on it, but if we don’t know what the scene really is gonna to be, and we haven’t seen the performance from the actors, it’s an easy way to lose time.
The second thing is that story tops everything. This is really my main overriding approach. I like when I’m prepping with the director, to ask some questions I think that the actors are gonna have. If I can get a really good feel for the story and I know what the director thinks that the most important parts of each scene are, then I know where to put the camera and how to light it. If we don’t know those things, then we don’t really know what we’re trying to do. I think it’s really helpful as a cinematographer to ask questions about the story you are trying to tell, figure out the why before you decide on the how.

I also think it’s important to prep visually and keep reminding yourself that you’re not making a novel. So, in reading scripts the number one note I give myself all the time is HTS, which stands for How To Show. So, it’s common, and I can see why, and I don’t claim to be a screenwriter because I’m not, but it’s common to run into moments where things get described that you can’t actually see. Hence, Tim’s Niece walks into the room, she’s upset with Tim. Well, this reflects they’re related to each other and how she feels. How do we show all that? That’s why you need to know what the story’s about, and then, prepping visually, you can help tell that story. You can think about transitions from scene to scene and how you can help counterpoint what people do with what people say. That’s how drama really works.

StudentFilmmakers Magazine: What are your Top 3 Tips related to Lighting?

Patrick Cady, ASC: The first one is Block, Light, Shoot. [laughs] But also if an idea is stupid but works, it’s not stupid. So, I’ve lit really dramatic scenes with a light bulb in a plastic paint bucket. If you don’t have the money, please take consolation that the gear isn’t always gonna make it at all better, your approach is gonna make it better. Good crew is better than great gear. Don’t put your foot through it. Don’t fix something that’s not broken. And as a cinematographer working with a good crew, I think the number one thing to work on, is explain your problems and not your solutions. What I mean is, I came up as an electrician and gaffer, so I know the way I would fix something, but it’s always better and invites collaboration (which is the reason we’re doing it) if you say, “I want to send hard light through here, and then, have it feel like it’s bouncing off the floor over here, so this person in the foreground will get a little glow on their face”. When you’re talking with the director, and when you find out what she wants, what the scene is about, explain that same problem to the crew and they can help you find the answer and everyone’s working toward a common goal. 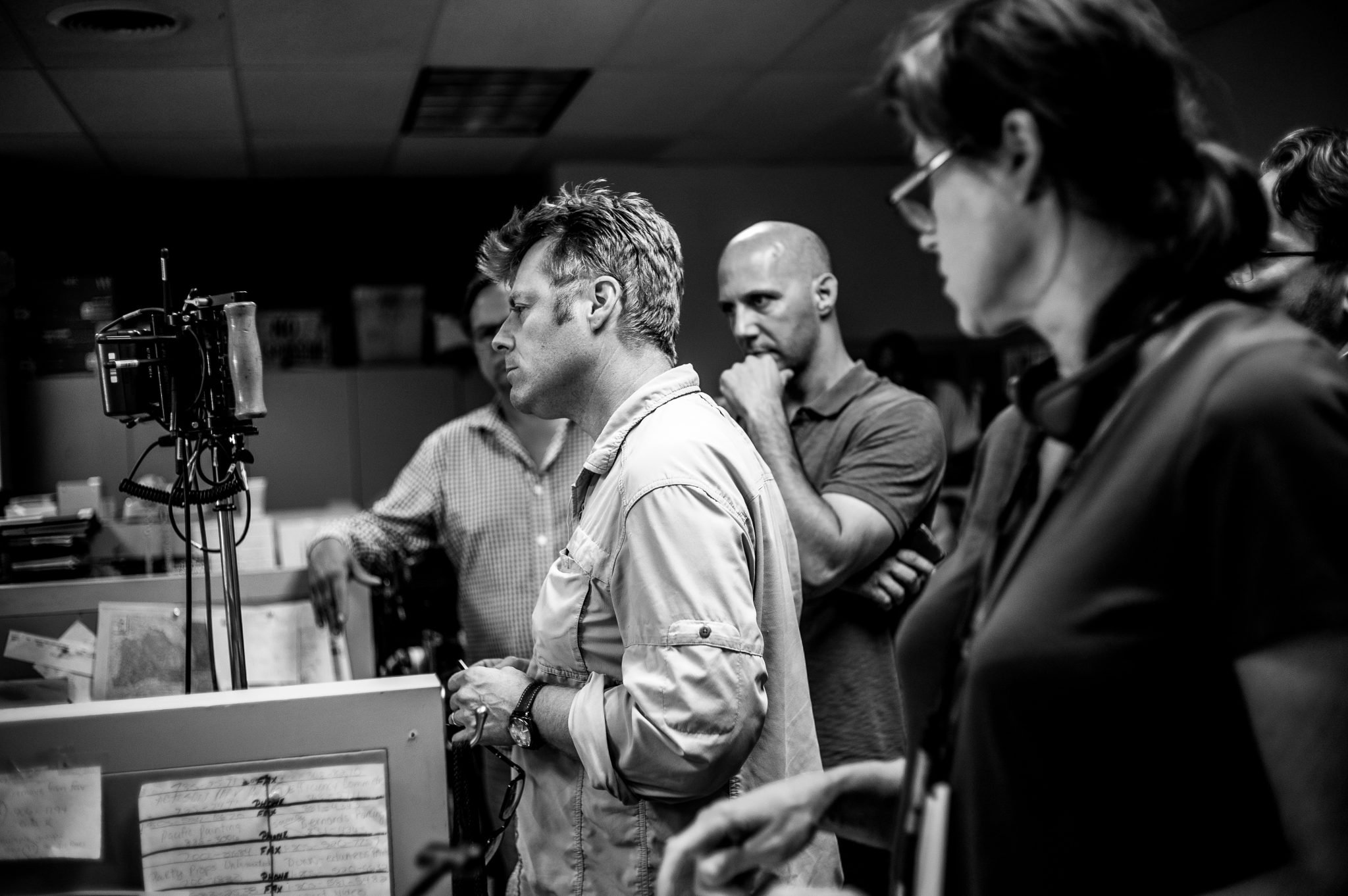 StudentFilmmakers Magazine
You must log in or register to reply here.