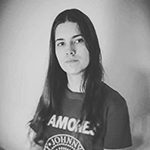 Cátia Martins was born in the city of Porto, Portugal, and currently resides in Braga, Portugal. She completed a degree in Cinema at the University of Beira Interior and is currently pursuing a Master’s Degree in Cinema at  ESTC in Lisbon. She started writing the first script of her first short film in 2017, (Tempo de Viver), and then started making experimental short films and documentaries. Cátia is currently in the pre-production on her experimental-fictional short film, Ūpāstīʒ Deorcnes.

How did you get started in filmmaking? Are you a student?

Cátia Martins: I am currently a student in a Cinema Master’s Degree program in Lisbon, and I started making films when I soon joined university in a cinema degree, where I started by making my first fictional film, “Time to Live,” and then made films focused on the experimental and documentary. My current project entitled, “Ūpāstīʒ Deorcnes” is in the pre-production phase, and it is a fictional experimental film.

Can you describe your creative process writing your first screenplay, “Tempo de Viver”?

Cátia Martins: My first script, “Tempo de Viver”, was a long creative process, the initial script was quite different from the final script, as it went through several versions, where I had to choose to cut scenes, people who could fit the budget of the film, and I also had to choose to make several changes to the different lines of the characters so that they were the most realistic and best fitted to the type of film.

The script, the idea, came from a need to make a film that points to something important that people would not pay attention to. The film generally portrays, as the name indicates a lifetime, that is, the time limit that the person may have without knowing it.

The film tells the story of Diogo, a young man who ends up knowing that he has COPD that leads him to depression, and in which someone calls his life directly, but in which he just ignored the warning, and which leads to death at the end of the film.

What was a unique challenge that occurred during the filming of your first short film, “Tempo de Viver,” and what did you do or how did you overcome the challenge?

Cátia Martins: The unique challenge that occurred during the filming of my short film, “Tempo de Viver,” I must say that it was without a doubt, to be able to direct the actors. I opted for amateur actors due to the question of my budget and that ended up intensifying my difficulty in being able to direct them. Many times, I had to film and remake several takes of scenes with them, in order to achieve a better performance of them. In which I ended up not being able to overcome the complete challenge. But it served as a process of a learning and experimentation process with the direction of amateurs actors, which in itself is a difficult process.

How are you navigating and keeping active and creative during these Covid pandemic months of social distancing, and times of quarantine and self-quarantine? Can you share some inspirational words with fellow film students and creatives?

Cátia Martins: At the moment, I am staying active and critical in the pre-production of my experimental, fictional, short-film, “Ūpāstīʒ Deorcnes,” and also in the writing of a new fictional script.

The words I can share to give film and creative students is that they must believe in their project and not be afraid to go ahead with it, even if the project may have flaws or errors, it makes us learn from the flaws and errors and progress in our creative process.

HAPPY NEW YEAR from our families and crews to yours! New Year. New Inspiration. New Works. May the new year

HAPPY NEW YEAR from our families and crews to yours! New Year. New Inspiration. New Works. May the new year