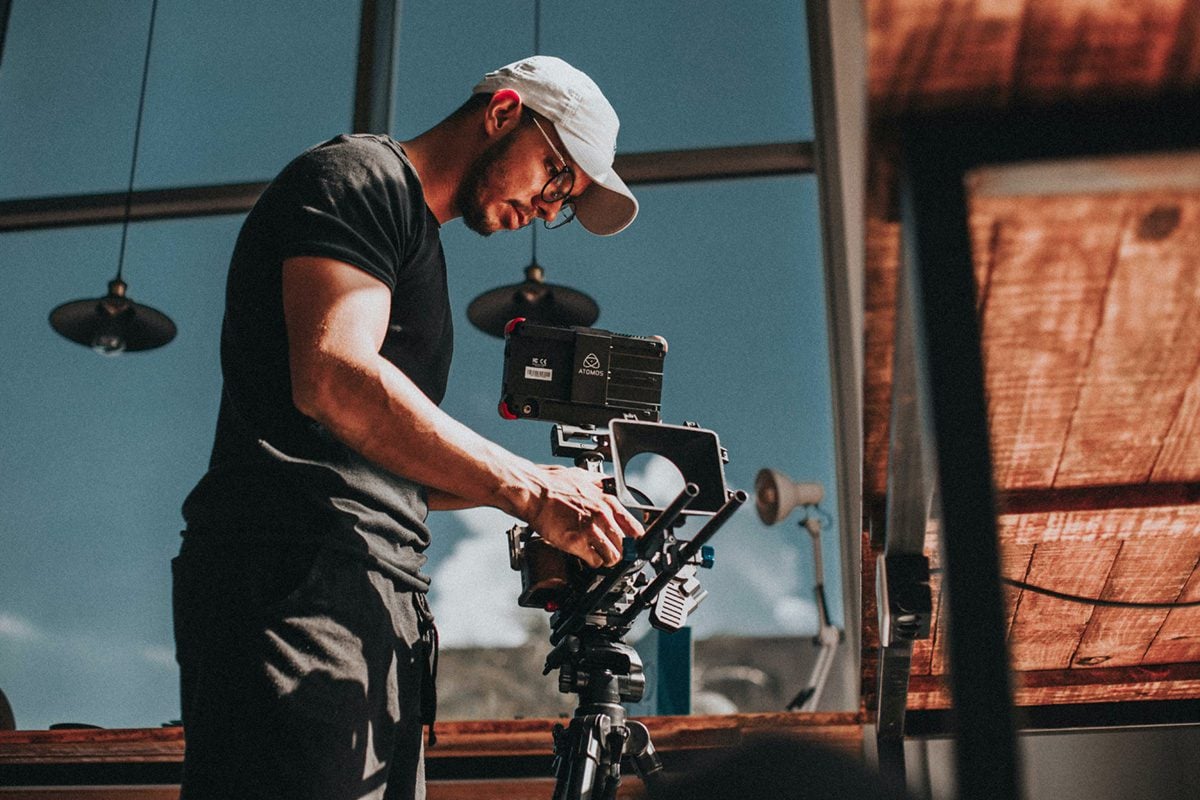 Each Shooting Day is Precious

“It’s strange that an enterprise as expensive as making films can be entirely at the mercy of the barometer.” ~Jean Cocteau

A shooting schedule is determined only after an analysis of the myriad details necessary to realize the screenplay. The bookends of the budget and the director’s proposition of how long it will take to shoot any given sequence shape this appraisal. The breakdowns created by the production team, in concert with the director’s breakdowns, storyboards and floorplans, is the formula to create a production schedule.

The budget dictates the number of shooting days.  This calculation reaps a stop date for principal photography. A low budget show must shoot quickly, perhaps six-day weeks for three to four weeks. A mid-sized budget might afford the director a six-week shoot. The larger the budget, the more time to shoot. From this shooting schedule a formula is applied to determine the number of pages to be shot each day.

There is a rule in the film industry that one page of screenplay equals one minute of screen time. Although not precise, it’s a fine way to generalize the schedule. If the screenplay is 120 pages long with a thirty day shooting schedule, then the director must average four pages a day. Some days the schedule will call for one page to be shot, and other days the director can bang out seven pages. The schedule will ultimately be based on these figures. If, for example, the director is scheduled to shoot a total of twelve pages in the first three days of the shoot, but manages to only shoot six, the producers can calculate that a thirty-day shoot may well end up a sixty-day shoot. If the production budget suggests a shooting day to cost on the average $200,000, then the overage can be projected to be in the neighborhood of $6,000,000. Not good.

Every aspect of the production is broken down onto breakdown sheets that are then transferred to a computerized or manual strip board. The strip board schedule is a system of strips, each one representing a scene and grouped together to make up each day’s principal photography. These days are then arranged into weeks and in one glance the production team has an overview of the entire production schedule. Each strip contains encoded information culled from the breakdown sheets relevant to the scene, such as which characters are on camera, whether the scene is day or night, interior or exterior, and the length of the scene in screenplay pages.

The assistant director, production manager or producer lays out a strip board schedule for the first time in the utopian world of continuity. This first schedule is in screenplay order; Scene #2 follows Scene #1, Scene #3 after Scene #2, etc. A schedule in continuity affords the actors a direct through line of development. As discoveries are made in the creative process of finding the characters and the story, they can build on one another.

Most film schedules are calculated out of continuity. Scene#4 may follow scene #93 and scene #62 may follow scene #4, etc. This one key fact spotlights the importance of the director, for they, as the sole audience member on set, manage the puzzle of the jumbled screenplay in their head while shooting so that it can be pieced together into a seamless whole.

The two dominant factors in calculating a schedule are cast and locations, as these are the most sizable budget chunks and should be dealt with in broad strokes. The trick to an efficient schedule (and resulting budget) is to “shoot out” or group together in the production schedule “big ticket” or expensive items such as actors and locations.

Other “big ticket” items in film production include crowd scenes (extras), studios, elaborate stunts, blue or green screen and specialized film equipment, such as a helicopter, crane or underwater housing unit, all of which can also be grouped together.

Each strip on the strip board is color coded to indicate one of four major shooting locales: interior-day, interior-night, exterior-day, and exterior-night. Strips may also be color coded, depending on the nature of the shoot, to identify specialty scenes, such as stunts or magic hour so they jump out at the viewer.

The four basic shooting periods are often laid out on the board in groupings. If possible, should the show require six exterior nights, shoot them out as a unit. If a company is shooting exterior day, they wrap at around 6pm. If the next day’s shoot is an exterior night, the company cannot be called until 6pm the following day. This leaves a gap of 24 hours between shooting days, an inefficient use of time. The same timing would be true in the opposite switch from nights to days. It may be unavoidable, but six exterior nights make a full week, and there is no loss of time if the company starts their week at 6pm on a Monday and ends it at 6am the following Saturday.

Calculating the most efficient use of time between shooting days introduces the concept of “turnaround.” Between the wrap time on one day, and the call time for the next, a certain number of hours must elapse. A minimum of eight hours for crew and twelve for actors. These are union regulations and are also common sense. To flog a crew and then ask them to begin another long day without proper rest will only hurt the film in the long run.

Often night shoots cannot be avoided, but an option is to consider “splits” wherein the crew is called at noon and wrapped at midnight.  This affords the director a half day of light for day exterior and a half day of night for night exterior.

Turnaround pervades the entire schedule. It can be assessed from the beginning of the scheduling process or when an on-the-spot adjustment is made during principal photography.  This is why it is so important for the director to understand the mechanics of a strip board. It’s one thing to study and solidify the board during a pre-production meeting, and quite another when, during the shooting period, an alteration has to be made to the schedule to compensate for an unplanned event,  such as an illness or loss of location. In the flurry of planning a schedule adjustment during shooting, it becomes convenient and imperative one read the board accurately and as a whole shoot. The ripple effect of moving one strip can unlace an entire schedule. Actors and locations have been contractually lined up for specific dates. Sets have to be built and locations pre- rigged for lights. Moving one date may adversely affect another. Often decisions to alter the schedule have to be made at lightning speed, and mistakes could be costly.

Finally, the schedule is informed by any fixed dates inherited by the production. A unique location may be available only on a specific date. Actors are contracted to begin on or about a specific date (within a week) to allow for some fine-tuning of the first day of principal photography. It behooves a producer to avoid if possible hiring an actor with a “stop” date connected to their contract. A stop date informs the producers that on a particular day the actor has the right to leave the shoot and to move on to a prior commitment. Stop dates are fixed on the schedule and become irksome should your show begin to go over schedule, for one has no choice but to let actors go on their stop dates.

One of the main reasons Hollywood exists in sunny California is because there are approximately 350 good shooting days. Exteriors are subject to weather, but they also bring with them great expanse, beauty and the mystery of nature, all of which look spectacular on film. François Truffaut once said the two things that look best on film are a train and the snow. Only through experience can a director react to the complications, challenges and joys of shooting exteriors. Rain, heat, cold, clouds and the sun all call for patience and some luck. In the ideal world, a director will first shoot out all exteriors, then move on to interiors. If the weather holds and the director gets all exterior material in the can, then when the company moves indoors, the weather is no longer a factor. Weather is one of the great unknowns on a film shoot, unless the shoot is entirely interior. Film production companies have a great deal of control over their environment, but none over the weather. Wind, rain, clouds, even sun can cause delays.

A good rule of thumb when preparing a budget and schedule is to identify, if possible, a cover set. This is an interior scene always dressed and ready to go at a moment’s notice. It should be at least a half or full day’s photography requiring  only principal actors. The cover set is then placed at the end of the schedule. If the scheduled scene for the day is an exterior and the weather inclement, the production manager can send the company to the cover set to avoid going behind schedule.

Student Filmmakers welcomes Beachtek, who joins the Film Directing Interactive Workshop Online with David K. Irving as a new workshop sponsor. Thank you, Beachtek! They will be giving away three DXA-MICRO PRO+ as door prizes. Here’s more info on the Little Audio Marvel!

NYU Professor David K. Irving is a film director, screenwriter, author, and professor. He is the author of several textbooks, including The Fundamentals of Film Directing and Producing and Directing the Short Film and Video. David’s professional film credits as director include Night of the Cyclone (1990) with Kris Kristofferson and Marisa Berenson; C.H.U.D. II (1988) with Robert Vaughn and Gerrit Graham; The Emperor’s New Clothes (1987) with Sid Caesar and Robert Morse; Sleeping Beauty (1987) with Morgan Fairchild, Tawnee Welch, and Sylvia Miles; Rumpelstiltskin (1987) with Amy Irving and Billy Barty; Goodbye, Cruel World (1983) with Dick Shawn and Cynthia Sikes. Documentary credits include Romare Bearden: Visual Jazz (1995); Betye & Alison Saar: Conure Women of the Arts (1994); Jacob Lawrence: The Glory of Expression (1993); Dr. Lorraine Hale: Alive with Love (1992); Robert Colescott: The One-Two Punch (1992); Faith Ringgold: The Last Story Quilt (1991); The Walker Cup (1991) for the United States Golf Association. Theatre directing credits include Home Remedies (1982) by Paul Minx for the Actor’s Outlet; The Man Who Killed the Buddha (1981) by Martin Epstein for the Los Angeles Odyssey Theater; The Skin of Our Teeth (1981) by Thornton Wilder for the Beverly Hills Playhouse; Action (1990) by Sam Shepard for the Pilot Theater. Credits as producer in film include Home Free All (1982) with Alan Nicholls and The Great Texas Dynamite Chase (1975) with Claudia Jennings for New World Pictures. Screenplay credits include Rumpelstiltskin; The Emperor’s New Clothes; The Secret of the Lost Valley (1980).  He has won numerous awards including the Bronze Chris Award for Jacob Lawrence; the Cine Golden Eagle for Faith Ringgold; the L.A. Weekly Award for Direction for The Man Who Killed the Buddha, the Dramalogue Award for Direction for Action, and the Writers Guild of America Award for The Secret of the Lost Valley. Recipient of an American Institute intern grant to work with Robert Wise on The Hindenburg (Universal Pictures).