Dressing the Hordes in a Moment’s Notice: Working On the Set of “A Man Called Horse II” and “Rambo III” 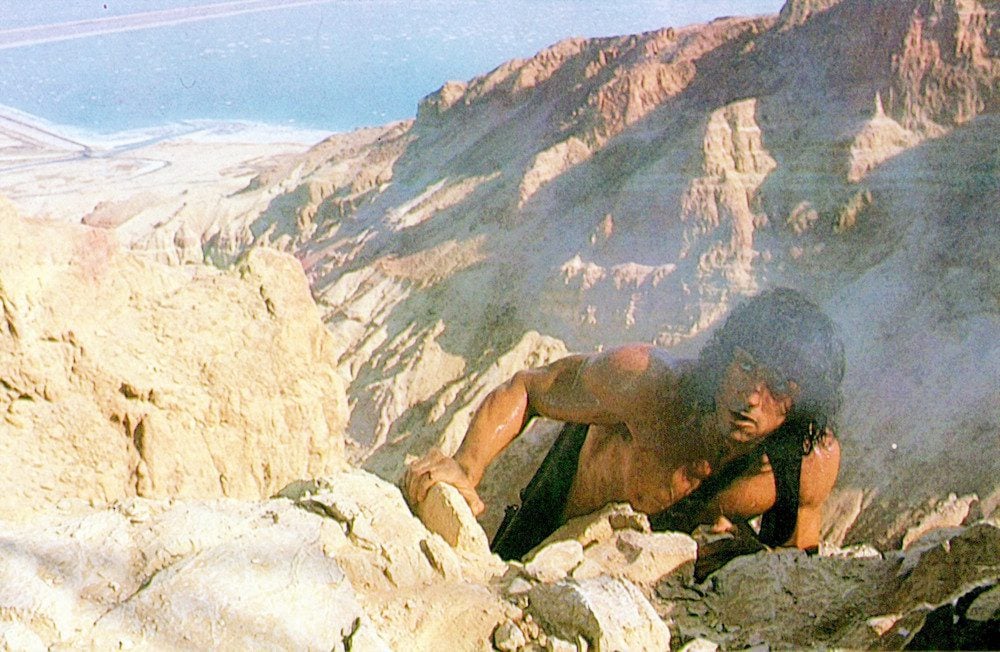 I used to work with a friend and fellow costumer named Robert Labansat. Bob taught me a lot of things. His first approach to anything was: The solution to any question has to exist – the only real question is – do you have the experience and imagination to uncover the answer? I remember a sterling example to his philosophy became illustrated on a film called The Return of a Man Called Horse. During pre-production we were told that there would only be a total of fifty Native Americans extras used on location in South Dakota. We were going there essentially to shoot background footage in the snow for a couple of weeks, then go directly to Mexico where the main part of the film was to be shot. Accordingly, I sent 60 or so period leather ‘Indian costumes’ to the location in South Dakota and sent the rest (several hundred) to the location in Mexico to set up a department and pre-fit Mexican extras.

Once in South Dakota, when the director saw the location, he told us that he wanted to use a hundred and fifty extras the next day instead of fifty. What to do?

I was beside myself with anxiety. We only had sixty outfits, and we needed a hundred more. As far as I knew there was no way for us to come up with another hundred period leather Native American outfits by the next morning – but, old Bob wouldn’t take ‘no’ for an answer. “Come on,” he said, “There has to be a way.” There was a very small town close to us, so small it didn’t even have a fabric shop – but it did have a feed and grain store – and there we went. At first glance there was nothing useful, then, we both saw it – a giant roll of burlap used for sacking. We bought the whole thing and went back to our little department in the local motel, where we proceeded to cut the burlap into pieces of various sizes and stapled them into square garments.

The next morning, when the extras showed up and the assistant director nervously brought them to us, we happily fit the enlarged crowd in our newly constructed burlap costumes. Once on the set we told the 1st AD to please put our best looking in front of the crowd closest to camera and our ‘burlap’ people behind. He did. The overall color looked great with the burlap matching the leather and the fifty well-dressed extras in the front of the crowd sold the look.

I still laugh when I think about it – but in the end, Bob was right, no matter the problem, the answer does exist – you just have to look for it with confidence.

On Rambo III there was a lot of action and that meant a lot of stunts and special effects. We shot most of the film in the deserts of Israel where we were miles from any kind of towns or other support. And, we only had what we had, in other words, no matter what the scope of the action and destruction we couldn’t have anything we didn’t have on the truck.

There were several large battle scenes where Rambo mowed down armies of Russian soldiers and that meant that we had to keep the action going day after day with some kind of system for replenishing the ‘in-front-of-camera’ Russian soldier/stunt team, even though they were constantly being shot to pieces with squibs and blood.

The effects supervisor and I parked our trucks side by side with the trailer used for changing the stunt people. Between us we set up a large tub with plenty of bottled water available.

We started the day by giving Russian uniforms to the effects truck to load with squibs. The effects truck would place the blood hits, score the uniforms and pass them back. We would then dress the stunt soldiers and get them to the set where they would be rigged by the set effects person and ‘blown –up’ for camera.

Scene over we would take the stunties back to the staging area where we would undress them. They would wash up and put on a new set of rigged uniforms and head back to the set. We would then strip the used and bloody uniforms of their effects rigs – give those back to effects to reuse, then wash out the bloody uniforms, sun-dry them, repair them in our sewing-machine truck, then pass them back to effects to re-rig.

This system of cooperation between, wardrobe-stunts and effects allowed us to continue, day after day, for months, reusing the same uniforms in action sequence after action sequence – Funny, at the end of the show each stunt uniform was a mass of zig-zag repairs.

Richard La Motte, a 35-year veteran of the business, has worked on numerous movies, serving as Military Costume Technical Advisor (Last of the Mohicans, Pearl Harbor), Costume Designer (Gods and Generals, Crazy Horse, Tecumseh, Rambo III, Goonies, The Island of Doctor Moreau, The Wind and the Lion, Hounds of Hell), Production Designer, Costume Supervisor, and Property Master. He is the author of the book, “Costume Design 101,” published by MWP. Richard’s website is www. RichardLaMotte.com.