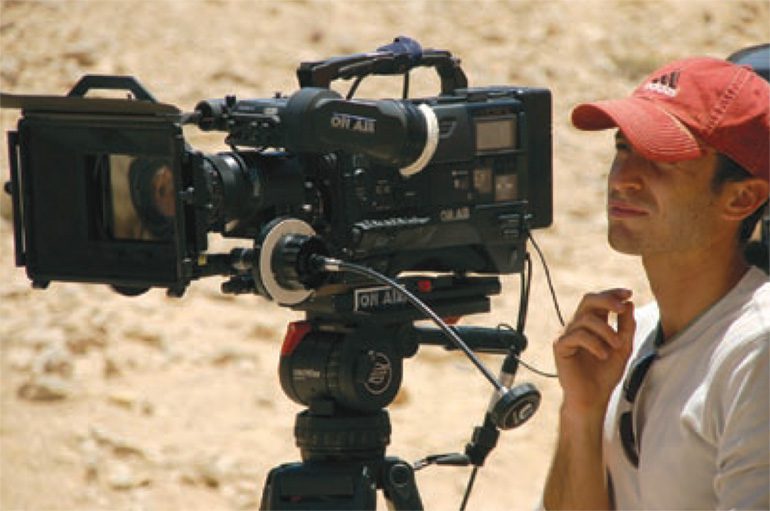 Pictured above: Director of Photography, Tel Aviv, Israel. Behind-the-scenes still taken from the short film production, Golda a European Champion. The film takes place at a remote military base on the Israel-Egypt border. A field-school on the Negev Desertstood-in for the base.

#ThrowbackThursday #TBT  Do you remember our Community Spotlight with Shahar Reznik?

“I started my career as a cameraman for the IDF. Following my discharge from the film unit, I began working as a second camera assistant in television commercials and later as a first assistant and focus puller. My expertise and experience in operating quickly paved the way toward becoming a full-time cameraman and director of photography. Last June, after years as DP, I was honored by my colleagues at the Israeli Film & TV Guild who elected me for an active role in the Union.”

“As part of my research for each project, I gather all sorts of visual references that best articulate my intentions for the film. The works of artists Juan Munoz and Caravaggio always provide valuable inspiration.”

Challenge: “My basic challenge is conveying the director’s vision while utilizing the existing [and usually insufficient] resources. My current project, a short titled, Running in Circle, requires sending shafts of light through the windows of a tiny apartment without a budget for large sources.”

Solution: “We take advantage of the sunny weather. My plan involves placing mirror reflectors on the roof of an adjacent building and shining sunlight through 1 x1 of light-grid into the windows… should do the trick.”

“Mirrors and various reflective surfaces are very useful both as creating interest in the frame, and as instruments for extracting more from the set and lighting.”

“Planning ahead. I draw floor plans for most scenes – it’s a reliable means of communicating my intentions for the crew and figuring out the most efficient way for getting through the day. Yet I always deviate from the plan, improvise and try the make the most of the existing conditions on the set and the actors’ usage of the space.”

“I’m currently working on a documentary feature by award-winning director Ibtisam Mara’ane and the short mentioned above. I’ve recently completed two short films: Light Sleep and Golda a European Champion. I shoot lots of local and international documentary and reality shows for national TV stations, commercials and music videos. Cinematography is my passion in life, and for interesting projects I am more than willing to travel many miles… Geography is no obstacle.”

Join the Filmmakers Network or Update Your Profile!

StudentFilmmakers Magazine: Each issue addresses the needs of the five distinct phases of film and video making.