Clearing the Air with a Filter: Hazy Daze by Ira Tiffen 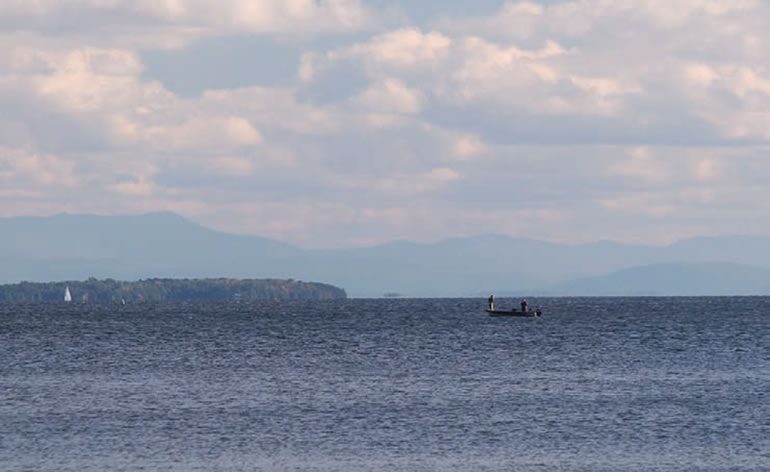 Standing on the beach, we look way far away out over the water. Off in the distance we see fishermen, an outcropping of rock, and the far side of Chazy Lake at the horizon. The farther away things are, the more obscured by atmospheric haze, until the far shore is left as just a pale outline no more solid than a ghost.

In the air are, of course, lots of things: many minute particles, water droplets, pollution, and the various breathable gases we know and love. When objects are too far away for our stereoscopic sense of distance to function reliably, we learn to gauge how far things are by both their size and the amount of haze we see them through. We know that the greater the haze, the farther the object.

Much of this haze is the reflected glare of sunlight from the aforementioned water droplets. As with other forms of reflected glare we have been discussing, this has polarized qualities, which allow us to differentially remove them using a polarizer, leaving the un-polarized image-forming light to come through with greater clarity.

Glare reduction with polarizers in these situations is not as effective as it is with windows and water, for instance, when you’re at the proper reflectance angle. The solid particles in the air contribute to the haze, and do not reflect much that is polarized. And remember that you still must rotate the polarizer to get the maximum effect.

In these images, with the polarizer (Figure 1) you can more clearly see the rock outcropping on the left as evidenced by its darker density matching that of the water in front. The clouds are more detailed, if still pale, and the mountains in the far distance are more readily discernable from the sky above. Notice that the un-polarized scene (Figure 2), for example, shows the rock as being paler by comparison.

In this age of environmental enlightenment, it’s nice to be able to clear the air with just a judicious turn of a filter.

Photos by Ira Tiffen.
In over 30 years of making optical filters, Ira Tiffen created the Pro-Mist, Soft/FX, Ultra Contrast, GlimmerGlass, and others, netting him both a Technical Achievement Award from the Academy of Motion Picture Arts and Sciences and a Prime-Time Emmy Award. Elected a Fellow of the SMPTE in 2002, he is also an Associate member of the ASC, and the author of the filter section of the American Cinematographer Manual.