Art, Dance, and Capturing the Quality of Movement 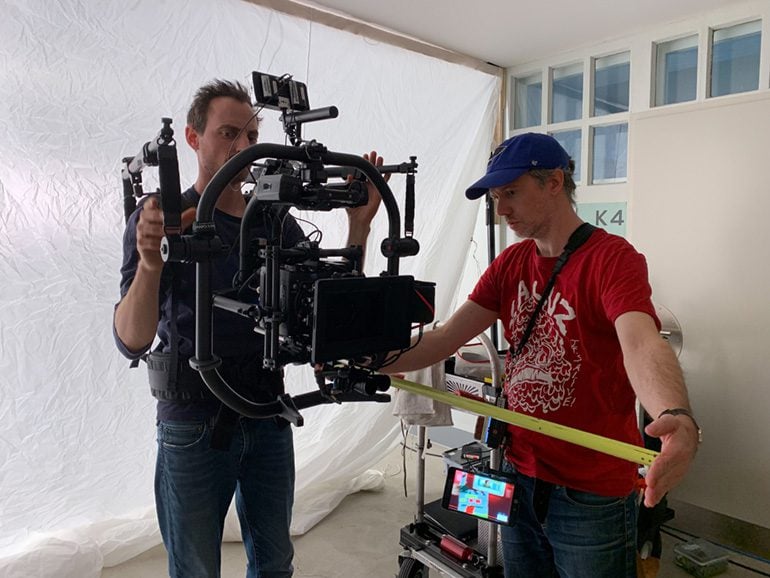 “Out of Ordinary,” 2020 Student Academy Award Finalist, Alternative/Experimental Category
Art, Dance, and Capturing the Quality of Movement with Alicja Pahl

StudentFilmmakers Magazine: How did you approach directing this short film as a team, with choreographer Luca Signoretti and fellow cinematographer Tobias Buchmann?

Alicja Pahl: The Project, “Out of Ordinary,” was implemented as part of our master’s degree under the wings of Andreas Birkle, one of our two mentors and good souls at the ZHdK. Every year those tackling the master’s degree in camera must make a film in collaboration with a given choreographer and the first year of the bachelor’s course in dance. It is an absolute interdisciplinary collaboration with the different departments that the ZHdK houses, like choreographers, composers, dancers, editors, sound designers, etc. 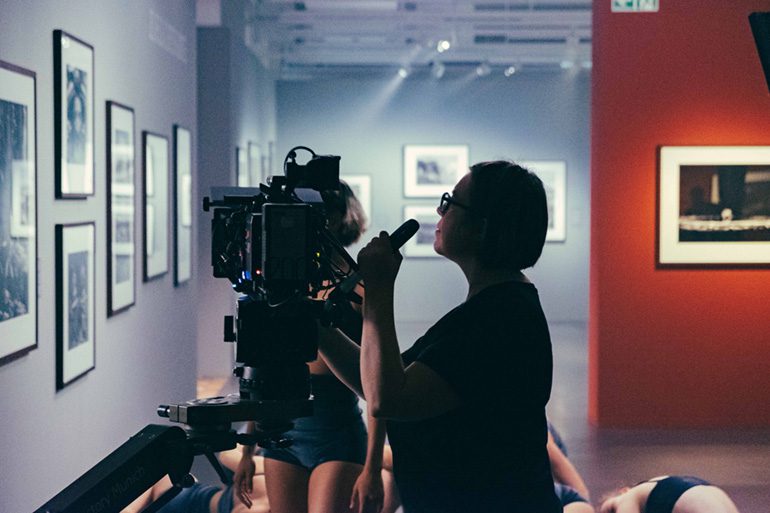 StudentFilmmakers Magazine: Was it difficult finding a singular “voice” in the narrative, with three storytellers at the helm?

Alicja Pahl: Tobias, Luca and I wanted to create something beautiful and challenging right from the beginning. The three of us are very ambitious when it comes to quality. We are very different and yet we spoke a common language very quickly and everyone was able to contribute their strengths. Tobias is incredibly strong at implementation. He has lightning fast ideas and incredibly technical, demanding images in his head. I am someone who works in terms of content, and also, I am the spontaneously creative in the group. I always keep an eye on the overall picture and also try to bring everyone into line. I also think that I was a bit of the moderator in our ‘trialogue’. I love art and dance and orient myself a little in this world. On the other hand, I’m of course a cinematographer and developed my visual language at the Polish Film School in Lodz (PWSFTviT).

Luca is the one who moves the story and the dancers. He has incredibly great visions and ideas and also pays great attention to the location. He always has a space in his head when developing a choreography.

But it was also so funny to implement into Luca`s mind that film is not just the perspective of a viewer in the theater.

He is such a bright, funny and highly talented choreographer, but he had a gap in filming. During our discussions he recognized very quickly how different, but for sure, how interesting the camera perspective can be. You can get close to the skin so you can feel it. Film is also extremely exciting when it comes to space. The importance of depth and movement or shifting perspective. 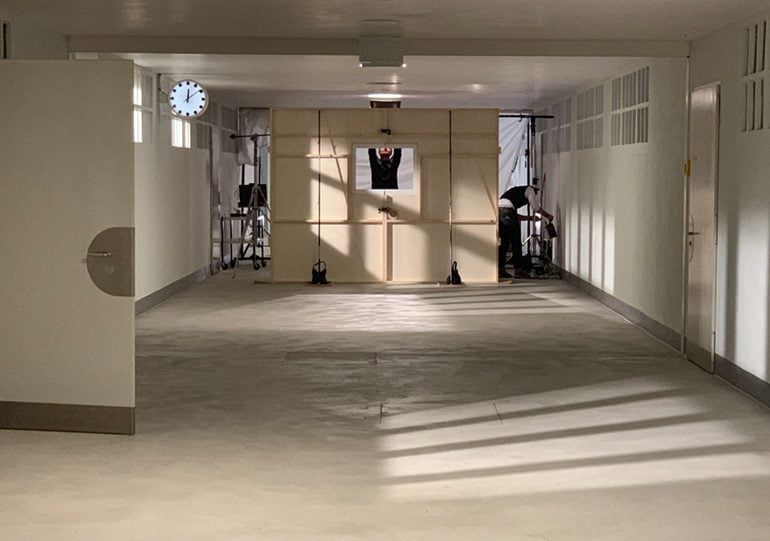 StudentFilmmakers Magazine: What was your most challenging scene to shoot and light?

Alicja Pahl: Tobias had a vision and a plan for an implementation of how our protagonist dives into the picture and merges into the other world. It was a sequence in which Naina literally walks through a picture.

Through our good soul Marco Quandt, the head of our film studio at ZHdK and very experienced gaffer, we had a wall with a picture frame built. We had  to recreate it with the exact colors and frames from Sebastiâo Salgado’s Genesis exhibition in the Museum für Gestaltung in Zurich. The wall was divided in two, Tobias followed the actress with the Alexa Mini on a gimbal. There were two sequences – 4 minutes and approximately 2 minutes. As with everyone’s shot and planned sequence, the greatest challenge is the interaction between the technology behind and the actors and dancers in front of the camera. In fact, it is always the last takes. Unfortunately, these shots were cut for dramaturgical reasons. 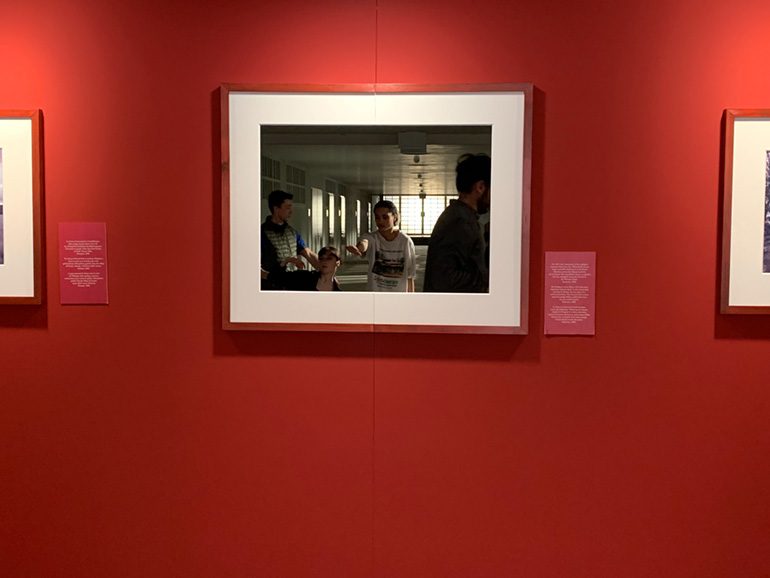 Luca had choreographed different sequences for the second part and the different rooms. He rehearsed them with different dancers. As planned, rehearsed and organized, the first part was so spontaneous and improvised as the second part. We had a limited number of hours in the museum, I think it was 5 or 6 hours, which was a highlight for us anyway. Here I have to thank the museum’s director Christian Brändle, Sebastiao Salgado himself and his agency in Paris. I had an idea about light but no idea what Luca had in mind. He showed me the different sequences on the day of shooting and I quickly developed the movement and designed the light for it. I benefited from my previous experiences with dance in film and my own passion for dance. Luca, on the other hand, made me aware of the “Quality of Movement” again. That makes an incredible amount of sense and just such an eye for the way a body moves or stands. Only with such a sensitivity can masterpieces like “In the Mood for Love” or “The Piano” be created. In these films, the story and the suffering of the protagonists are told through the “Quality of their Movement.”

The third part was rehearsed and organized, but we had bad luck with our locations. We did not get a permit for our desired location and switched the day before the shoot to the ZHdK internal film studio. Luca was great and flexible. He showed us cutout from an Israeli choreographer Hofes Shechter. Unfortunately, we are all not completely satisfied with this part, but when will you be?

StudentFilmmakers Magazine: If you could share your best experimental filmmaking tip for new and aspiring filmmakers, what would it be?

I think if you have an interesting or sometimes a breathtaking location, it inspires you. It gives you an idea about a look and a first concept of lighting. It gives your protagonist or performer an atmosphere so they can react to it. And sometimes it gives you even an idea.

From a production point of view, it helps you to save money in the Visual Art Department, technical equipment and in Post-Production.

So, if you invest in research, and sometimes money in your location, it is the best investment you can do.

Even when it seems a pain or super expensive, at the end of the day it, it pays off. 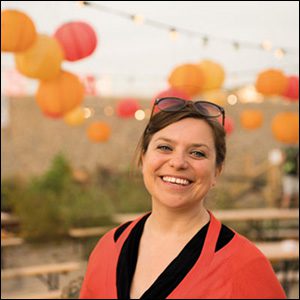 Based in Switzerland, Alicja Pahl loves to spread her artistic wings all over Europe and the world. Passionate, she dives in a story and develops hand in hand with the director and the rest of the visual team an individual language for each project. She learned her way of seeing at the Polish National Filmschool in Łódź (PWSFTviT). Alicja has worked more than 15 years as a DoP all over the world. After a break from the film business and moving to Switzerland, she decided to complete another Master’s Degree in Cinematography at the ZHdK, where she continuously meets inspiring and talented directors. She is always looking to work on exciting stories with great personalities.