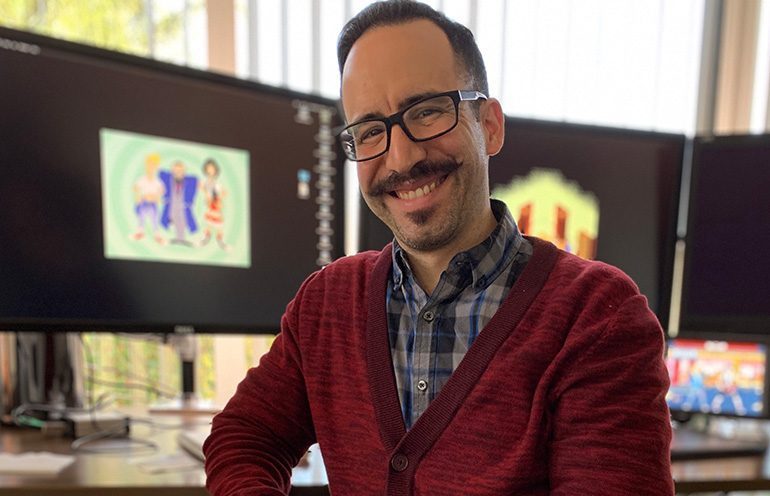 Richard discovered editing on a whim while studying theatre at UC Irvine. Combining his love for storytelling and technology made post-production a clear path that he’s been pursuing ever since.

Starting out shooting and editing videos for GoTV, one of the earliest providers of mobile video, he worked his way into television starting in unscripted. Unscripted proved a valuable training grounds to work on his assistant editing skills before transitioning into scripted television and features.

Richard’s filmography includes “UFO Hunters,” “The Good Place,” and “Naked.” He is also known for his work on “Bill & Ted Face the Music,” “Catch-22” and “I’m Dying Up Here.”

Richard Sanchez: One of my favorite scenes that I’ve cut was from a film called, “Flock of Dudes”. My editor and co-creator of Master the Workflow, Larry Jordan, was very generous in giving me scenes to cut and one of those scenes was a diner dialogue scene involving several great comedians. The challenge in the scene was balancing the humor versus the needs of the story. The director allowed the actors to improv lines and the scene was incredibly funny. Heavily improvised scenes can introduce a world of problems, particularly in that you might get a joke in one setup and not in another, so cutting down for time can be difficult. As prevalent as that is, that wasn’t so much my problem so much as the actors were so funny that I could have allowed the scene to be 30 minutes if I wanted it to, and the jokes were hysterical. Exercising the restraint to say, “This is funny, but do I need it, or do I want it?” Ultimately, I handed the scene off to Larry and he finished it, but it’s still one of my favorite scenes I’ve edited, or rather edited an early version of.

StudentFilmmakers Magazine: What was one of the most important things you learned while working as VFX editor on sci-fi comedy film, “Bill & Ted Face the Music” (2020)?

Richard Sanchez: Perhaps the biggest lesson I learned on “Bill & Ted” was the importance of branching out of built in effects and taking advantage of third-party plugins. I used to be averse to using third-party effects plugins (Boris Continuum Complete, Sapphire, etc.) largely because oftentimes productions either don’t want to pay for them, or they only pay for them on one system which can cause problems if renders go offline. As a result, I would always try to do all of my effects work with built in Avid effects. Being strong with the built-in effects is a good safety net if your production denies you plugins, but avoiding those tools because of one theoretical circumstance could severely limit you in your work. Without Boris Continuum Complete, I would have struggled quite a bit with my post-viz work on “Bill & Ted.”

Richard Sanchez: I find that from show to show, we often use different terminology even if we mean the same thing. We all bring a different experience to the table, and often somebody will say something that I might know by a different term. Further, it can be terrifying to admit that you don’t know what somebody is talking about it. I was working with a very experienced VFX Producer, but I found at first there were a variety of terms that I was confused about, and I learned a valuable phrase that helped me get past that: “I think I know what you’re talking about, but might know it by a different term. What do you mean by that?” Being able to put your ego aside for the sake of keeping the ship on course is far easier said than done, and I felt a great deal of pressure because I had such high hopes for the project. It may sound fairly trivial, but once we were all on the same page and communicating in a manner where we understood everybody at all times, the process became much smoother.

StudentFilmmakers Magazine: If you could share your “Top 3 VFX Editing Tips” for student filmmakers and aspiring film/video editors, what would they be?

Richard Sanchez: My first bit of advice is, identify the one thing you want to do least and dive into it as fast and headfirst as you can. The example I use is Filemaker Pro. For years I heard of it, but it seemed so daunting to learn. Such a nebulous program, and so many tutorials are about business administration as opposed to post-production. However, once I dove in and decided to learn the program, I’ve found it has completely changed how I work, and I don’t think I could manage most shows now without it.

Second bit of advice, branch out with your toolset. I used to avoid After Effects as much as I could with VFX work, the rationale being that I need to prepare shots for a vendor to work on, After Effects is slow, and if I have to render out of After Effects all the time, my editor might not have the full range of handles, and I’ll be going back to After Effect all day to revise. I think there is some truth to that rationale, in that if you can do effects work in Avid, there are distinct advantages, for example, your editor can trim to their hearts content, and all it requires is a simple render, but there are some effects that are either going to be way too much work in Avid, or you have a preview and you need to get something a little more refined in After Effects. In a nutshell, there’s a time and place for everything, the more tools you know, the more you can bring to the table.

Last bit of advice, avoid at all costs saying no. I found throughout the course of this film, I surprised myself a few times with shots that I thought would be too much for me to handle, but I tried to keep a mantra of, “Let’s try it.” Time management is also important, and it’s important to acknowledge when something would pull you away from other tasks that might be important, but being the person who solves problems as opposed to being a problem, is how you want to be remembered.