AS DIALOGUE GOES BY – By David Landau 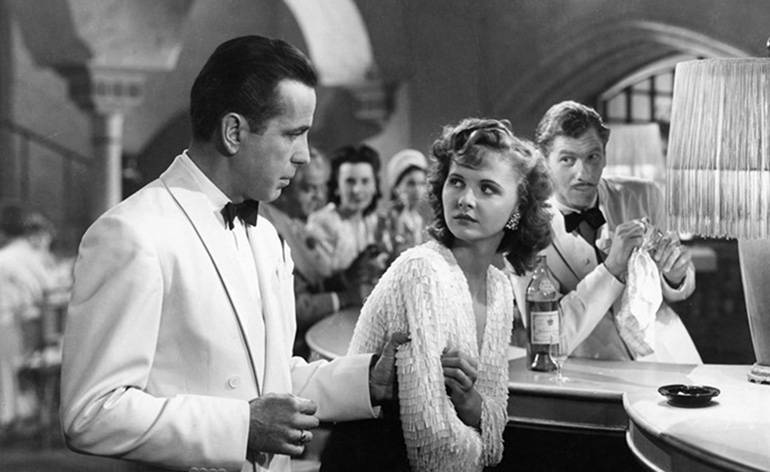 The true irony here is that the film was based on an un-produced play “Everyone Comes to Ricks”, which is one of the earliest lines in the film, and was considered a B-movie at best.  Many actors turned down the film and those that did it did it strictly under contract.  15 years ago a screenwriter played a trick on the industry and sent out the screenplay under the original title, only changing the character names  and with his name as the screenwriter.  The screenplay was turned down by all development executives except two.  One replied, “This would have worked years ago, if it had stars like Humphrey Bogart and Ingrid Berman”.  The other responded “It’s been done before.”

Why was one of the most beloved classical films rejected by so many Hollywood people? First, they felt it was too talky.  The screenplay is heavy on talk.  But talk sets up character, such as in this early scene with Rick in his bar.

YVONNE: Where were you last night?

RICK: (his back to her) That’s so long ago, I don’t remember.

YVONNE: Will I see you tonight?

RICK: (matter of factly) I never make plans that far ahead.

This is choice dialog, character driven, crammed with back story which establishes his character so quickly and precisely.

Second they felt it was slow paced and took too long to get started.  After all, Rick isn’t introduced until page 10.  That’s ten whole minutes into the film without the protagonist.  That’s a long set-up.   But of course, the set up works, It establishes time, place and circumstance.  And with the arrival of the Nazi General, the antagonist, the stories false antagonist Renault gets to display his own character, by telling the general not to worry about picking up the killers of the couriers.

RENAULT: Oh, there’s no hurry. Tonight he’ll be at Rick’s. Everyone comes to Rick’s.

They also complained about the ending.  The hero didn’t get the girl at the end.  What kind of ending was that?  Nobel.  Something most stories today seem to be lacking in.

Last they complained that the film needed to be opened up.  It almost entirely took place in the café.  Yes there were a few scenes at the police station and one at another café and one or two at a hotel – but !  Casablanca may lack visual expanse and diversity, but because of that, at least in part, it has incredible intimacy.

Who hasn’t read Casablanca at least once?  Many people in Hollywood it would seem.  But what Casablanca helps to re-enforce is that if the dialog is truly motivated by the characters (The male characters best demonstrate this with Renault, Rick and Ugarte) it doesn’t seem to matter how open the script or almost how long the scenes.  If the audience is carried along with the story, if the characters talk moves the story forward and reveals more character – dialogue is a treasure almost forgotten in today’s Hollywood.  And this is something to be remembered, as time goes by.

David Landau is the author of “Film Noir Production: The Whodunit of the Classic American Mystery Film” from Focal/Routledge press. He is also an award winning cinematographer and author of the book “Lighting For Cinematography; A practical guide to the art and craft of lighting for the moving image” from Bloomsbury Press. He holds an MFA in Screenwriting from Goodard college and is the co-screenwriter of the feature film “Dark Tarot”, available on Amazon Prime. Davidis a full professor in the film department at Fairleigh Dickinson University, but also continues to work professionally as a DP on low budget films and corporate videos and as the lead gaffers on Lifetime’s “Project Runway Allstars”.